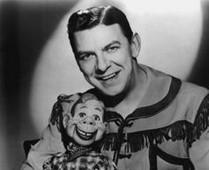 In all of TV history, there are two programs whose massive initial samplings were at least party attributable to major, wintery snowstorms. Roots, in 1977, was one; Puppet Playhouse Presents, thirty years earlier, was the other.

The night it premiered, two days after Christmas, so much snow fell in Manhattan that Broadway went dark that night, and vaudeville and movie palaces closed their doors. Up and down NBC’s northeastern corridor of stations, the weather wasn’t much better — so when Puppet Playhouse was unveiled that afternoon at five, giving house-bound kids something to watch before dinner, the response was immediate and amazing.

So, in retrospect, was the approving tone of the Variety review it generated, reflecting more relief than apprehension at the new medium’s potentially mesmerizing effect on young viewers. “In the middle-class home, there is perhaps nothing as welcome to the mother as something that will keep the small fry intently absorbed and out of potential mischief,” Variety wrote. “The program can almost be guaranteed to pin down the squirmiest of the brood.”

In 1949, that still-snowballing show would be retitled The Howdy Doody Show, reflecting the popularity of its main marionette. (The year before, as a phenomenally successful publicity stunt, Howdy had run for president, campaigning as “the only candidate completely made of wood.”)

“Buffalo” Bob Smith was the creator and host of the show, and therefore the man most responsible for the unforgettable elements in the pioneering children’s program. One of his best ideas was to get a bunch of little kids into the studio to serve as a live audience — then and forever known as the Peanut Gallery.

Other Howdy Doody highlights included Clarabell the silent clown (played over the run of the series by three different actors, including future Captain Kangaroo Bob Keeshan), squirting seltzer and honking horns as the Peanut Gallery squealed with delight. And Buffalo Bob’s opening line — “Say, kids! What time is it?” — to which the Gallery, and all the young viewers at home, would respond by screaming, “It’s Howdy Doody time!” And the theme song, and the beautiful Princess Summerfall Winterspring (played by Judy Tyler, who went on to star opposite Elvis Presley in Jailhouse Rock), and the enthusiastic cry of “Kowabunga!” by Bill LeCornec’s Chief Thunderthud, and the no-strings-attached character of Gumby, who was spun off into his own series, and a lot, lot more.

In 1960, after thirteen years on the air, NBC cut Howdy’s strings, but Smith and company went out with a poignant parting jesture that ranks among TV’s finest finales. All during that last show, Smith had promised that Clarabell, then played by Lew Anderson, would have a special surprise — and the program concluded with a closeup of the formerly silent clown, who had uttered not a word in the history of Howdy Doody. Fighting back tears, in a choked whisper, Anderson’s Clarabell looked right into the camera and said, “Good-bye, kids.” The show, like the series, was over — and there wasn’t a dry eye in Doodyville.