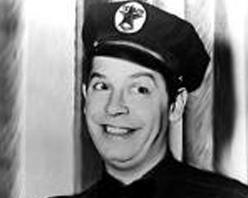 As the host of the pioneering NBC variety series Texaco Star Theater, Milton Berle earned two nicknames that stayed with him forever after: “Uncle Miltie” and “Mr. Television.”

The former was coined when, while ad-libbing a good-bye to the kids in the TV audience at the end of one show, he told them to “listen to your Uncle Miltie, and kiss Mommy and Daddy goodnight, and go straight upstairs like good little boys and girls.” The latter nickname came about because, for a couple of years when TV was a very small and urban pond, Milton Berle was its very biggest fish.

Texaco, which had sponsored a similarly titled radio series for the previous ten years, decided to attempt a TV version and tapped the star of another radio show it sponsored, The Milton Berle Show, to guest-host a handful of summertime Texaco Star Theater installments for NBC-TV, beginning with its June 8, 1948 premiere show. One guest shot was all it took: Berle packed the show with everything he had developed, learned, or “borrowed” from his career in vaudeville, and made room for guest stars such as Pearl Bailey and Señor Wences.

Days after Berle’s network TV debut, Variety raved that Berle was “one of those naturals,” credited him with “a performance that may well be remembered as a milestone in television,” and described the first Texaco Star Theater TV outing as “Vaudeo,” which Variety defined as “the adaptation of old-time vaudeville into the new video medium.”

The term Vaudeo soon was Deadeo, but Texaco wasted no time in springing to life: by that fall, Texaco Star Theater had a permanent host, and his name was Milton Berle. Within four months, by the end of 1948, Berle’s show was seen each week by an estimated 80 percent of all TV owners. He was the primary reason many people purchased their first TV sets: Tuesday nights were his, and both Time and Newsweek put him on the cover in 1949, in the same week.