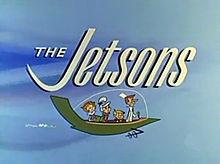 In 1962, viewers met George Jetson (and his family) when ABC launched the animated space-age series, The Jetsons.

The humble Hanna-Barbera cartoon was the first ABC show to be broadcast in color, even though most viewers were probably watching in black-and-white. In 1962, color television was still a pricey novelty, and many ABC affiliates had yet to install the color transmitters that would allow them to broadcast anything but black-and-white.

The series was set in 2062, and revolved around the Jetson family: George, an employee of Spacely Sprockets; Jane, his homemaker wife; teen daughter, Judy; young son, Elroy; and Astro, the family dog. Also seen frequently is George’s boss, Cosmo G. Spacely. (The family’s robot-maid, Rosey (later Rosie), made only two appearances in the 1962 series.)

The Jetsons was cancelled after just one 24-episode season. Hanna-Barbera later produced a second run of episodes which were rolled out in syndication from 1985 to 1987. In total, 75 episodes were made.

On this day in 2000, Fox launched the David E. Kelley drama, Boston Public. The series was...

Terry Bradshaw pulled off two victories on tonight’s all-new episode of The Bradshaw...

On this day in 1939, NBC presented the first televised professional football game, a match-up...

You season three is continuing to come together.  Scott Speedman has now joined...