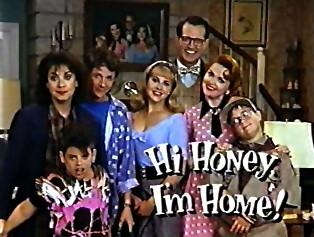 This day in 1991 marked the debut of the sitcom Hi Honey, I’m Home! The short-lived sitcom — which was taped in front of a live studio audience at Orlando’s Universal Studios — had a novel twist: In one of the earliest examples of broadcast-cable synergy, the show aired in prime time on ABC, then two nights later, repeated on Nickelodeon’s Nick at Nite.

In Hi Honey, I’m Home!, 1950s sitcom family the Nielsens find themselves — gasp! — cancelled and relocated to the “real world,” courtesy of the “Sitcom Relocation Program.” Their typically ’90s neighbors were the Duffs, a single mom with two boys.

ABC abandoned the series after six episodes; seven more were produced exclusively for Nick at Nite.