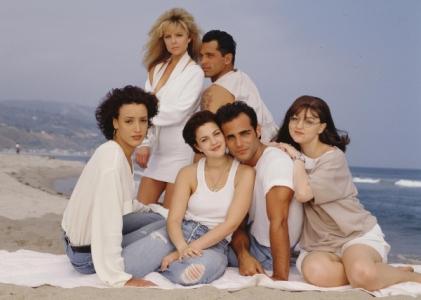 On this day in 1992, CBS introduced the summer drama 2000 Malibu Road. As far as TV shows go, Malibu Road had an exceptional pedigree. The series was created and written by the co-creator of L.A. Law, Louise Fisher. It was directed by Joel Schumacher, director of feature films such as Dying Young, St. Elmo’s Fire, Batman Returns and Trespass, and co-produced by TV icon Aaron Spelling and his producing partner E. Duke Vincent.

The series got off to a strong start and was supposedly slated for renewal, but was abruptly canceled after the sixth episode, leaving several storylines in limbo. In his 2000 book Aaron Spelling: A Prime-Time Life, Spelling says the show fizzled because of disagreements over license fees. However, in a syndicated interview published following the show’s demise, star Hartman-Black speculated that Spelling was “put between a rock and a hard place” because CBS had scheduled 2000 Malibu Road opposite Melrose Place, which put Spelling in the uncomfortable position of competing against himself.

On this day in 1999, Fox launched the animated sci-fi sitcom, Futurama. The series —...

Of the five higest-rated miniseries in TV history, Richard Chamberlain is the only actor...

Raven’s Home is getting a dose of culture this weekend.  Queer Eye‘s culture...