Cash Me Outside rapper Bhad Bhabie revealed that she made serious bank after starting up an OnlyFans account on Thursday.

The rapper claimed she had made over $ 1 million in just her first six hours on the subscription platform, which allows her to post photos, videos and audio clips with subscribing fans.

The rapper followed in the footsteps of other celebrities who have turned to the platform to diversify their income shortly after she turned 18 on March 26. 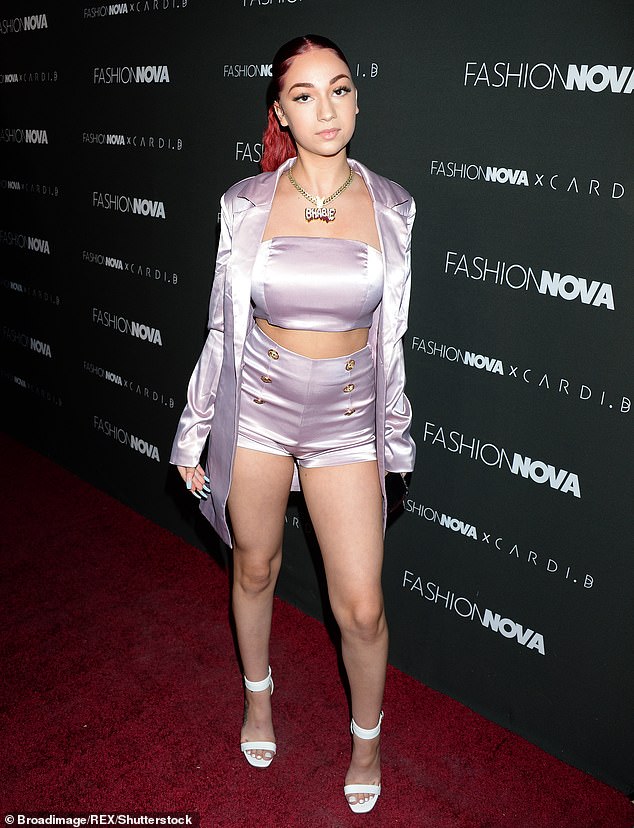 Massive payday: Bhad Bhabie, 18, claimed that she had made over $ 1 million in her first six hours after making an OnlyFans account on Thursday; seen in 2018 in LA

Bhabie (whose given name is Danielle Bregoli) posted what appeared to be a photo of her computer screen showing her gross earnings, which had already surpassed one million dollars in her first day on the service.

She earned over three-quarters of a million dollars from her baseline subscriptions, which currently cost $ 35 per month, which 50 percent discounts available for longer subscription periods.

She also received more than a quarter of a million dollars via tipped direct messages, and more than $ 5,000 from tips on her posts.

‘Not bad for 6 hours,’ she wrote in her caption with a starstruck emoji. ‘We broke the f*** out of the onlyfans record.’ 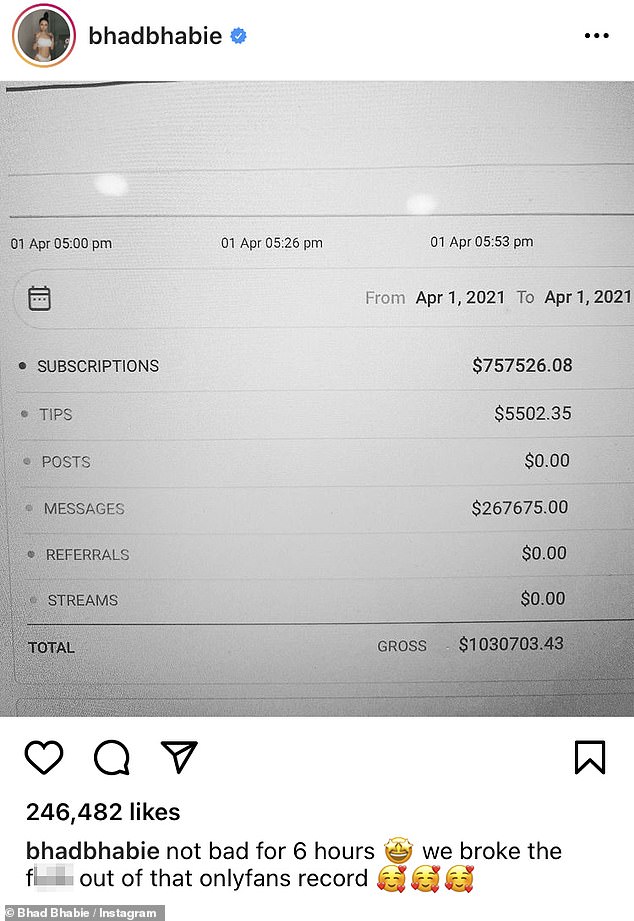 Making bank: She posted what appeared to be a picture of her gross earnings to Instagram, with more than three-quarters of a million just being subscription fees

OnlyFans allows content creators to share just about whatever they want with their subscribers, but the service is primarily known for its use by sex workers who post explicit material.

However, celebrities have begun using the service as well, including Cardi B, Jordyn Woods and Bella Thorne, among others.

Elsewhere on her Instagram account, Bhabie promoted her OnlyFans with suggestive videos of herself in lingerie and various states of undress.

‘Saw your 6 million comments and now i’m answering your call,’ she captioned a short video, referencing people who called on her to start an OnlyFans account, though the request started while she was still underage.

‘We breaking all the rules,’ she wrote before sharing the link to her page. 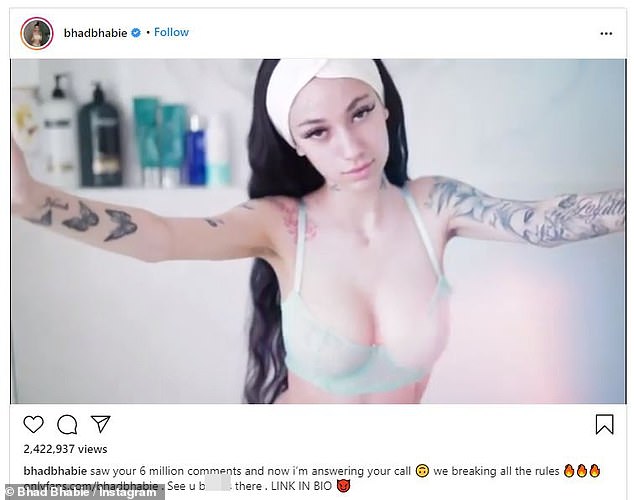 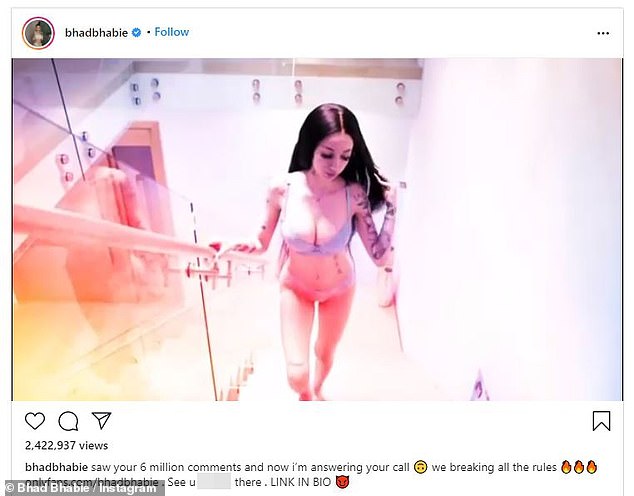 Showing off: Elsewhere on her Instagram account, Bhabie promoted her OnlyFans with suggestive videos of herself in lingerie and various states of undress 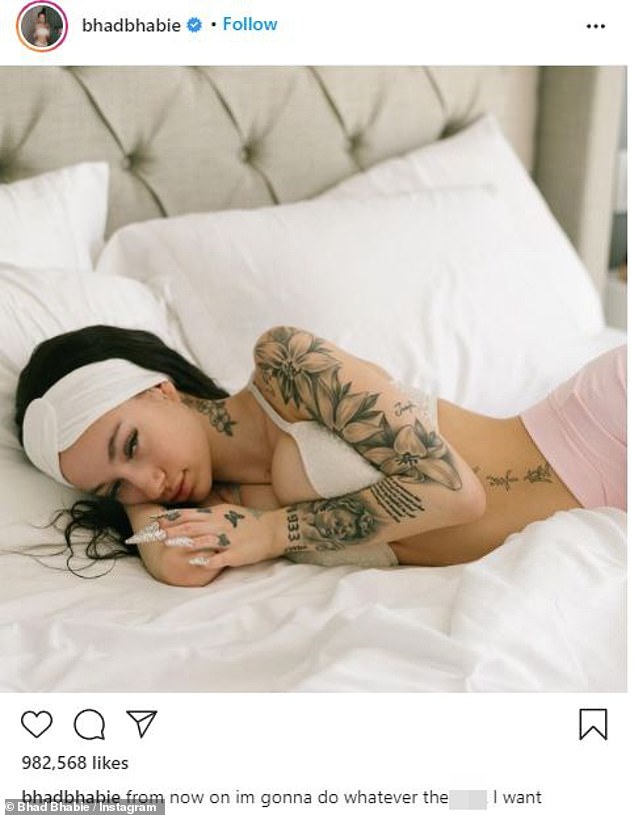 Creepy: The rapper was beset by fans calling for her to make an OnlyFans account, though the calls started even before she turned 18 in late March

Another photo posted Wednesday showed the novelty rapper lying in bed in a white bra and pink pants while staring suggestively at the camera.

In her Instagram Stories she shared a screenshot of one of her OnlyFans videos with her chest and panties scribbled over, as if she were in a state of undress.

‘The hype is real,’ she captioned it. 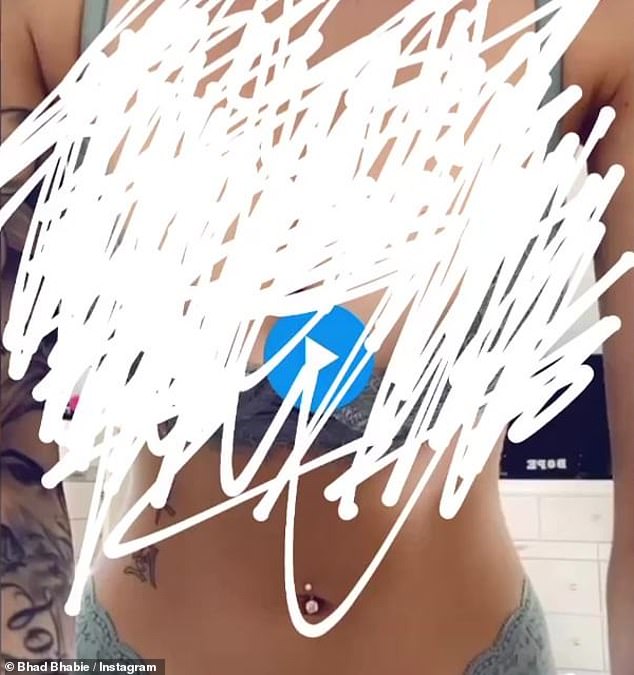 Suggestive: In her Instagram Stories she shared a screenshot of one of her OnlyFans videos with her chest and panties scribbled over, as if she were in a state of undress

Although the rapper seemed to be reading high with her new OnlyFans account, she shared troubling details about a camp for troubled teens that she was sent to in 2016 after the controversial Dr. Phil appearance that made her a star.

At the time, she was sent to the Turn-About Ranch in Escalante, Utah, in order to combat her behavioral issues that had been discussed on the popular program.

But in a YouTube video posted late in March, she claimed that the Christian treatment center abused her and took ‘away necessity privileges.’

She claimed that she was not allowed to share for her first three days after the treatment center, and that she was forced to remain sitting upright for her entire stay at the facility, even when she wanted to sleep. 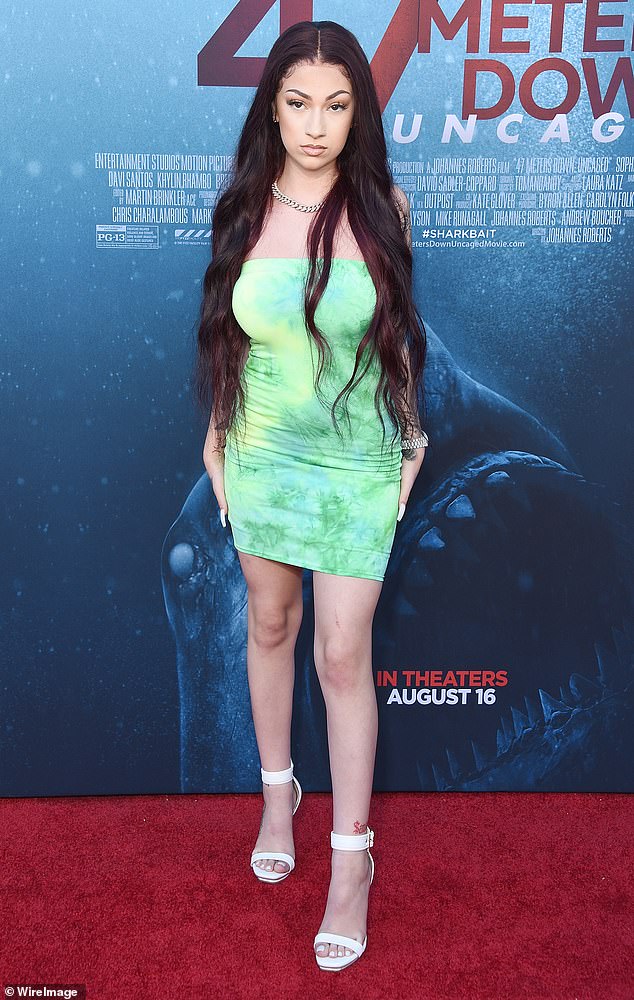 Dark time: Her OnlyFans success comes after she claimed she was abused at a behavioral treatment facility she was sent to by Dr. Phil in 2016; seen in 2019 in LA

‘They wouldn’t let me lay down for nothing. Like, I was falling asleep and they’re like, “Oh, get up, get up.” So I’m just sitting here like, “This is gonna be really bad,” when I saw these people have no sympathy,’ she said.

Bregoli claimed she spoke out after hearing the story of another person at the camp who claimed she was sexually assaulted by staff member, though the facility has claimed it found no corroborating evidence of that woman’s accusations.

‘That’s the things we these places, you have no evidence, you don’t have a phone there,’ Bhabie continued in her video. ‘They don’t have cameras there. There’s no evidence of none of this and obviously all the staff is in on it so they’re not gonna snitch on each other. All you really have is the kids that are there.’ 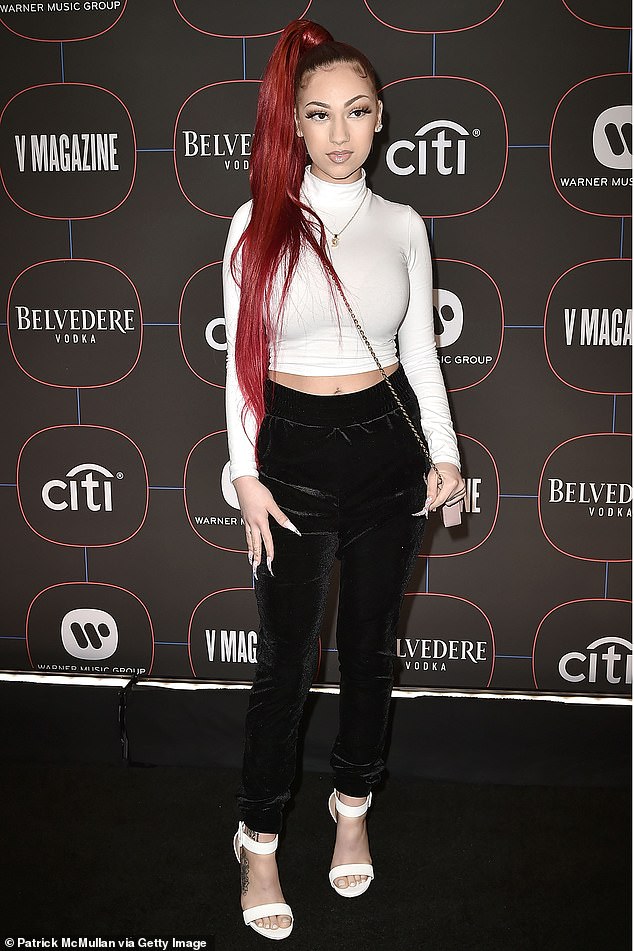 Rough conditions: She claimed she couldn’t shower for three days and had to sit upright at all times. She said there would be no corroborating evidence because the facility doesn’t allow residents to have phones and it doesn’t use cameras; seen in 2019 in LA