Bobby Brown’s 28-year-old son Bobby Jr. has been found dead at his home in LA

Bobby Brown’s son Bobby Jr, 28, is found dead at his LA home – five years after death of his half-sister Bobbi Kristina and eight years after stepmother Whitney Houston drowned in a bath

By Deirdre Simonds For Dailymail.com and Ross Ibbetson For Mailonline

Bobby Brown’s 28-year-old son Bobby Brown Jr. has been found dead at his home in Los Angeles, five years after the death of his half-sister and eight years after his stepmother Whitney Houston drowned in a bath.

Police rushed to a ‘medical emergency’ at the home in Encino, California, at 1.50pm on Wednesday.

A source told TMZ that officials ‘do not believe there was foul play involved’, but that officers are still investigating at the property.

Bobby Jr. is the second child R&B singer Brown has lost after the death of his daughter with ex-wife Houston, Bobbi Kristina, who was found unconscious in a bathtub in 2015 at the age of 22.

Three years before their daughter’s death, Houston had drowned in a bathtub after taking cocaine and Xanax. She and Brown had a tempestuous 15 year marriage that was plagued by drug abuse, violence and infidelity. 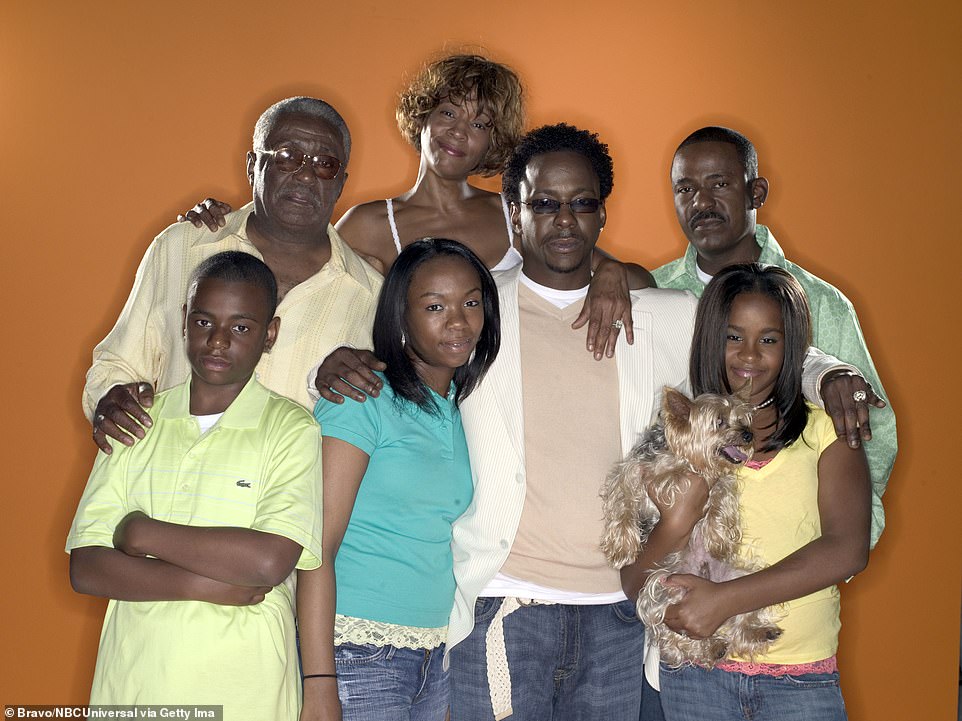 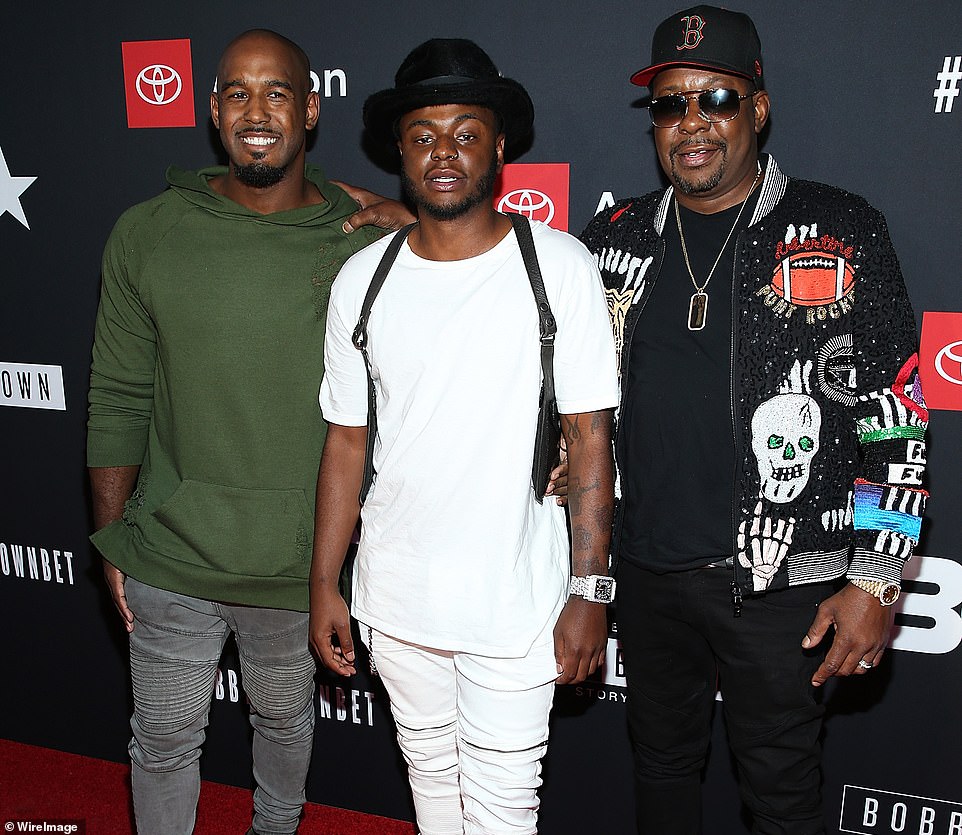 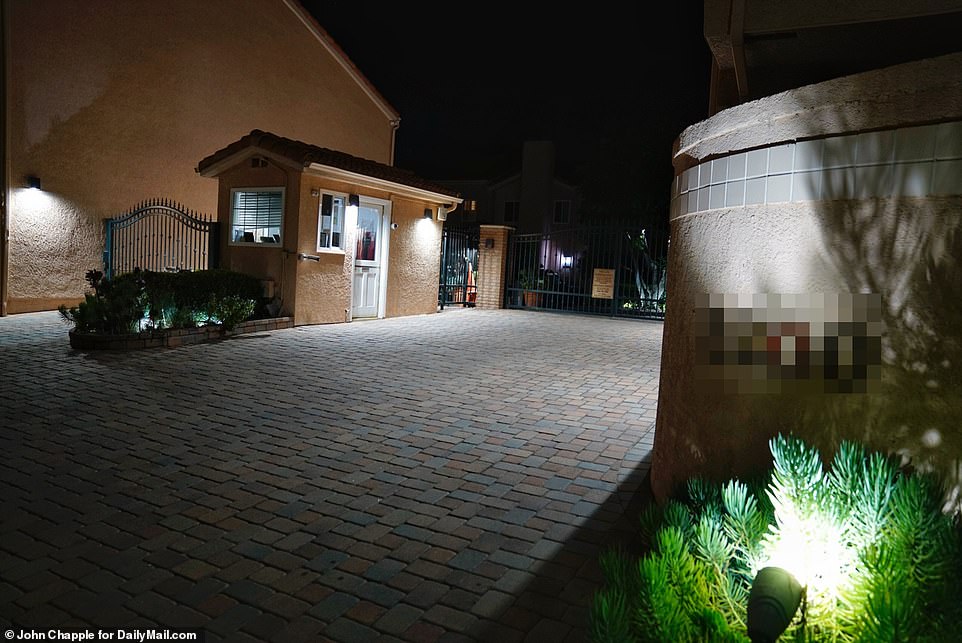 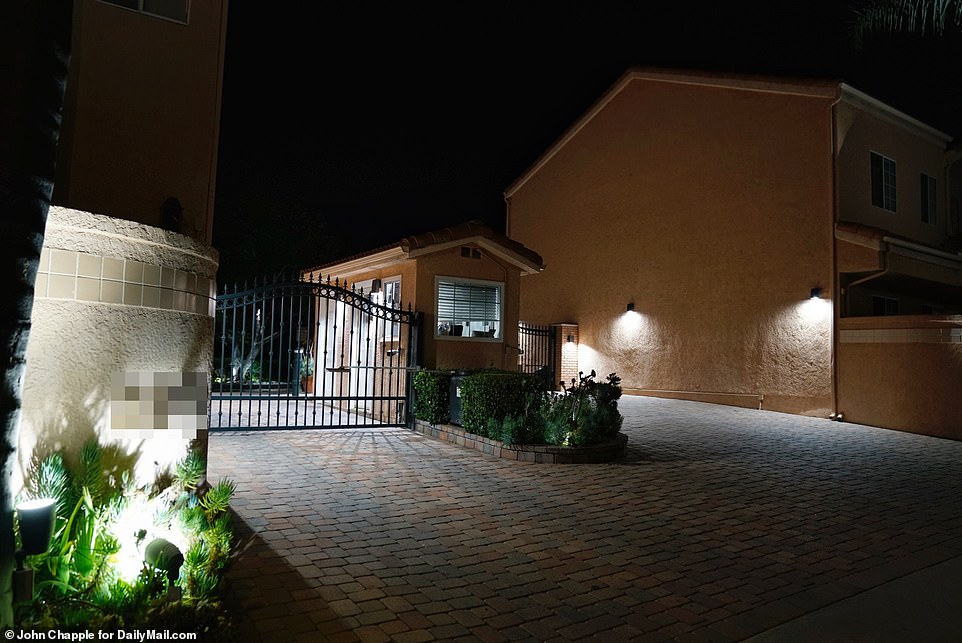 He was found dead at his home on Wednesday 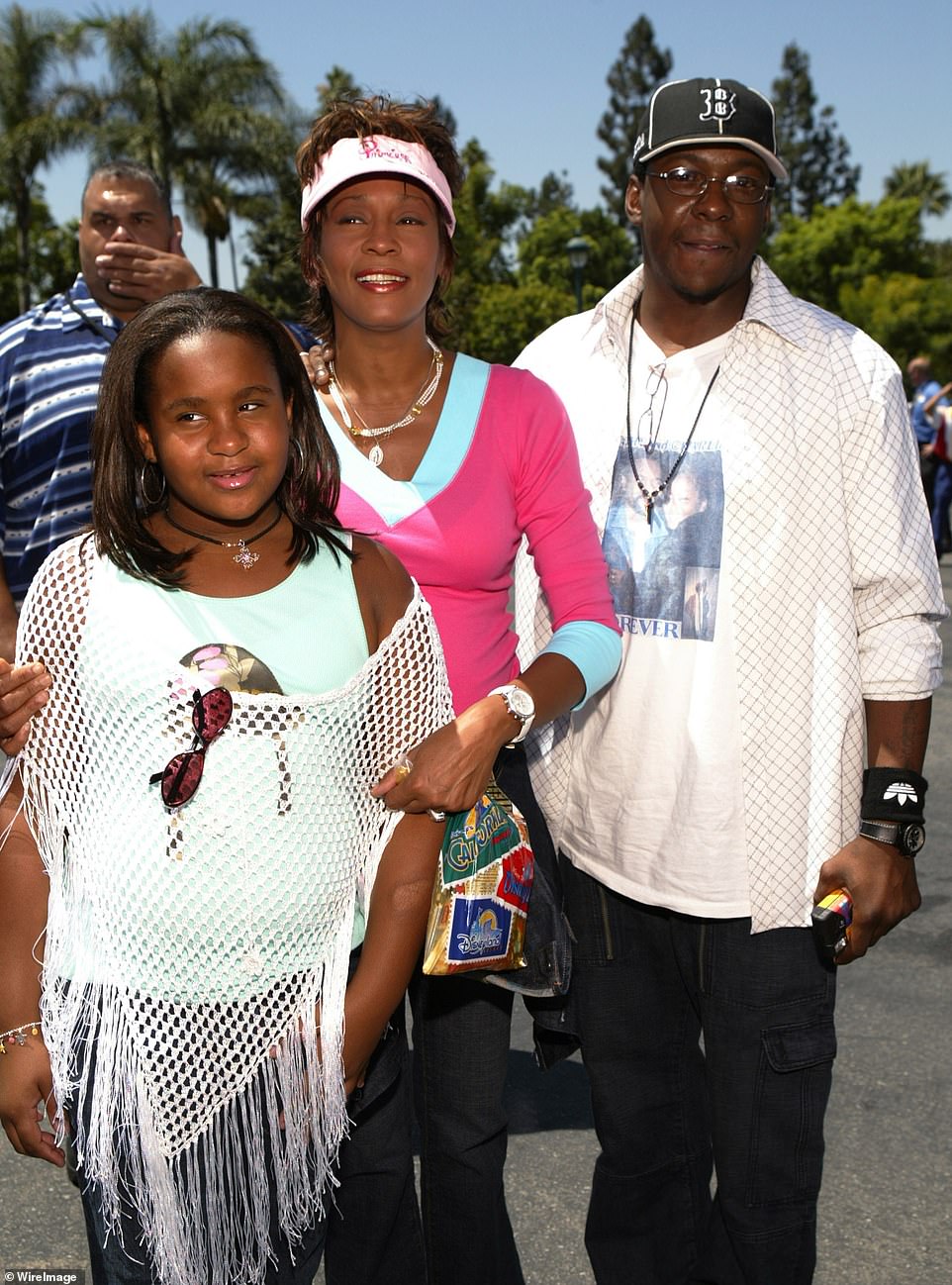 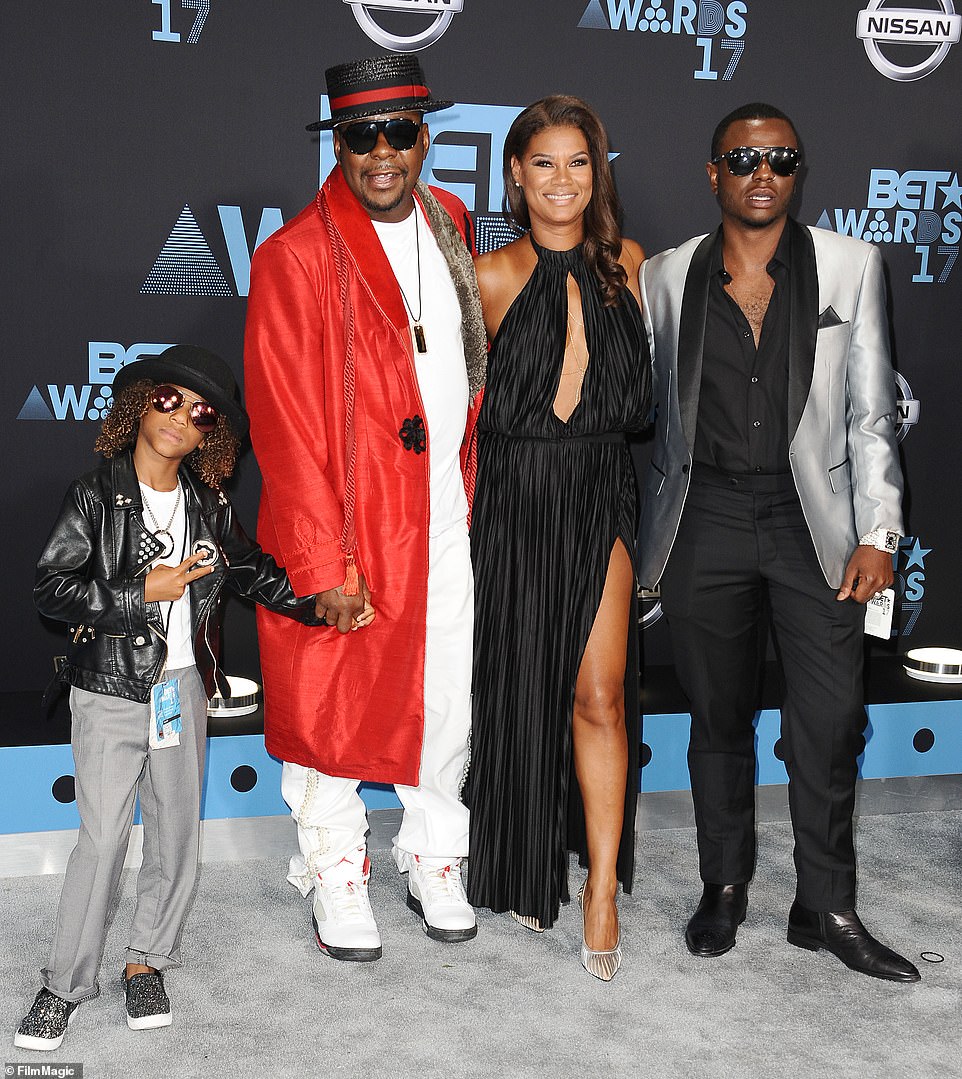 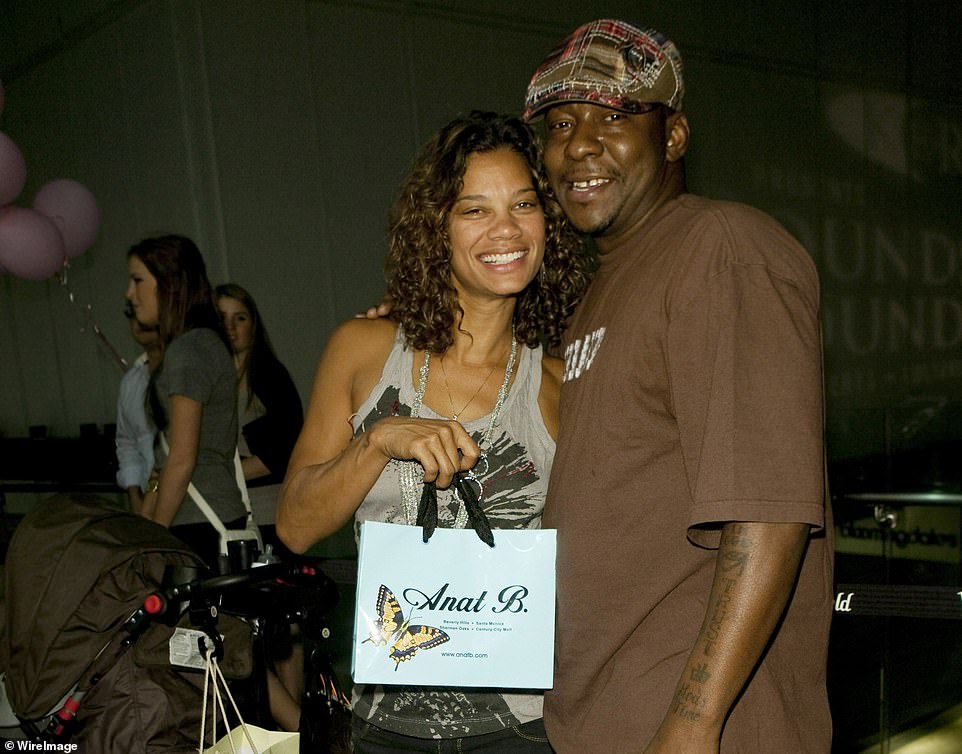 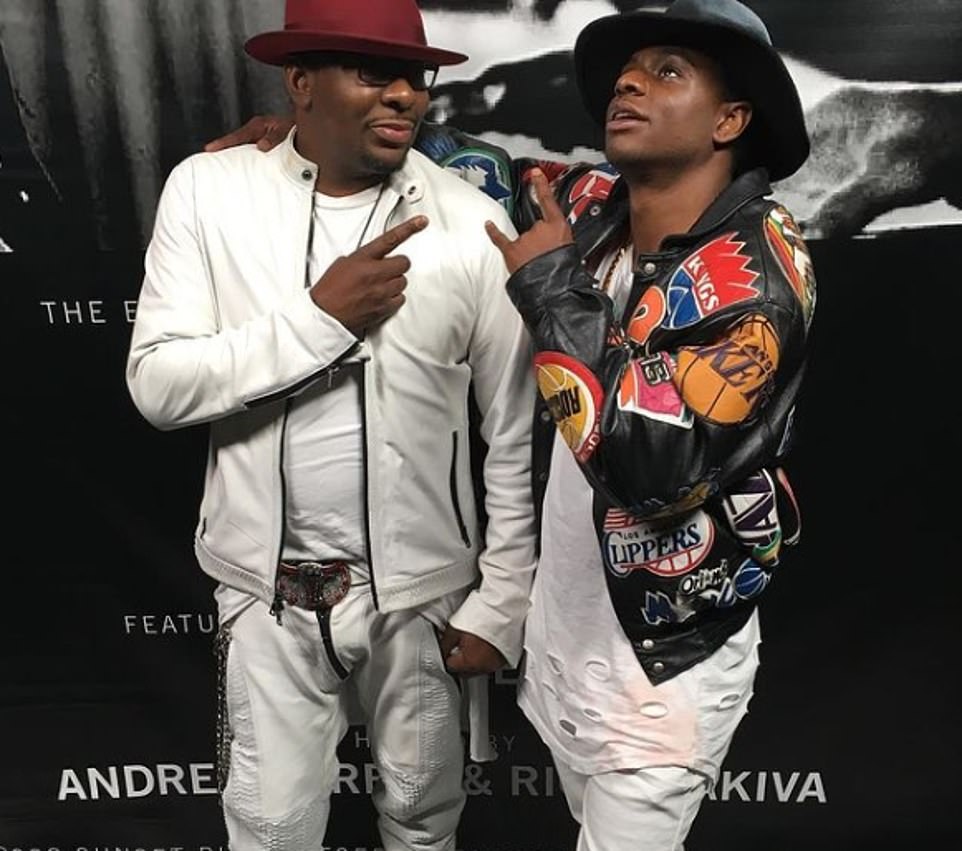 Father and son: Bobby Brown and Bobby Jr. in an Instagram post from June 2016. The father wrote: ‘Me and my mini me’ 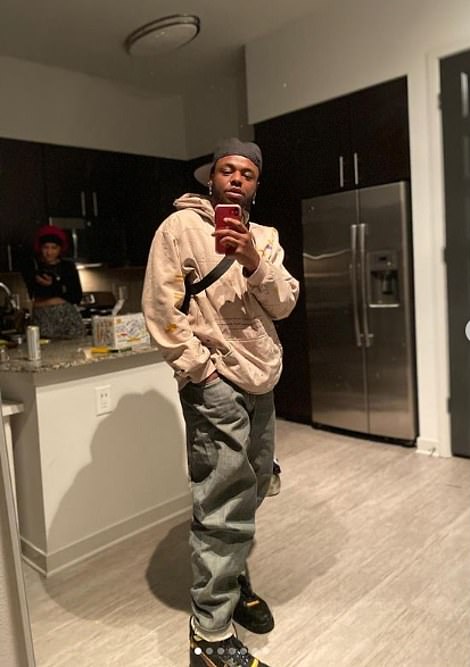 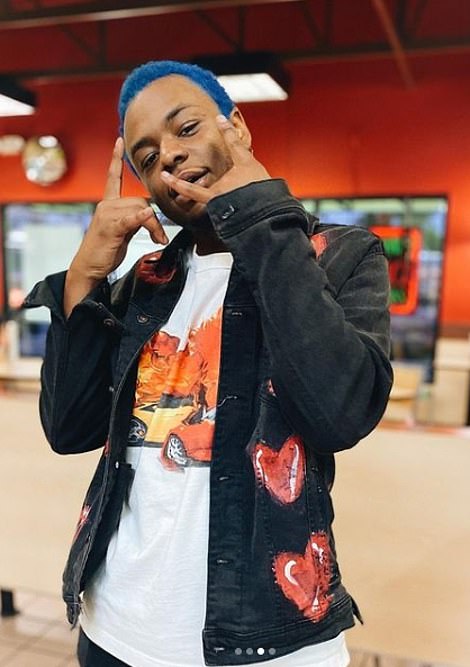 A spokesman for Los Angeles police department today said: ‘Upon officers’ arrival, there was a person down at the location.’

Bobby Jr’s death is the latest heartbreak for R&B singer Bobby Brown whose tumultuous marriage to Whitney Houston from 1992 to 2007 was plagued by drug abuse, domestic violence and infidelity.

Less than a year after Brown had his son Bobby Jr. with childhood friend Kim Ward, he had his daughter Bobbi Kristina with Whitney Houston in 1993.

Those two children are now both dead.

Bobbi Kristina was found unconscious in a bathtub at her home in Georgia, in January 2015.

She went into a coma and was kept on life support at a hospice until June of that year when she died after suffering severe brain damage.

The medical examiner found cannabis, alcohol and prescription drugs in her system but gave a cause of death as ‘undetermined’ because he was unable to find whether it was deliberate or accidental.

It was suspected that she may have been injured by Bobbi Kristina’s ex-boyfriend Nick Gordon during a domestic argument, but he was never charged with anything related to the incident.

Houston had been found dead in a bathtub at the Beverly Hilton Hotel just three years earlier.

The 48-year-old had drowned as a result of cocaine use and heart disease, the coroner wrote.

Also in her system were Benadryl, Xanax, cannabis and Flexeril.

In a 2009 interview with Oprah, Houston described ex-husband Brown as ‘my drug’ and that their relationship was ‘passionate, loving and crazy.’

She said her drug use became ‘heavy’ after her 1992 hit film, The Bodyguard, and Brown started to drink heavily.

Houston said they ‘would have ounces’ of cocaine on hand and that she would smoke crack cocaine rolled into cannabis joints.

The soul sensation said that there were to types of alcoholics in the world, really nice or really mean, and that her ex-husband had been the latter.

‘He was really mean. … I would become this little girl, I wouldn’t say anything,’ Houston told Oprah.

Houston detailed how Brown had once spat on her in front of their daughter Bobbi Kristina and that he had slapped her on another occasion.

‘He spit on me. He actually spit on me. And my daughter was coming down the stairs and she saw that.’ Houston told Oprah.

She revealed that this left her ‘very hurt, very angry.’

Another time while Brown was on probation for a traffic violence he lashed out at Houston and she said she hit him back with a phone.

‘He slapped me once and he got hit over the head,’ she said. ‘You can’t slap somebody if you’re on probation. It went to domestic violence court.’

Houston, however, stood by her man throughout the 2004 court proceedings because she ‘was his wife.’

Brown has always denied ever hitting his wife.

The cause of death is not yet known.

His brother Landon shared a photo of Bobby Jr. on today Instagram, writing: ‘I love you forever King.’

In a statement to CNN, Brown’s agent said that the singer had ‘no comment’ on the death of his son.

Bobby Jr., who was also a recording artist, had posted a photograph just days ago with his girlfriend Anya, 22.

She tweeted today: ‘The heavens gained an angel but I lost my soulmate.’

Bobby Jr. was Brown’s second child with Kim Ward, a childhood friend with whom Brown had a tumultuous 11 year relationship.

Ward gave birth to Bobby Jr. less than a year before Brown and Houston had their daughter Bobbi Kristina in 1993, their only child together.

In a 2006 interview, Ward had complained that Houston never liked Bobby Jr. because of how close together their children with Brown were born.

She told the Boston Magazine that Houston ‘has a problem with little Bobby.’

‘There’ll be times she’ll call me,’ Ward said. ‘She’ll be like, “Oh, well, can LaPrincia come down to spend time with Krissy (Bobbi Kristina) while we go to such and such?” Hello? No! He has another kid here, too.’ Ward said.

Following his half-sister’s death in 2015, Bobby Jr. reacted furiously to those who started following him on social media.

‘People really don’t give a f**k about you unless you’re relevant,’ he wrote in a since-deleted tweet. ‘And they don’t love you till you’re famous or gone. I don’t want these follows. Your follows ain’t gonna fill the hole in my heart, and y’all gon unfollow me once you stop caring.’

Bobby Jr’s death is the latest tragedy to befall 51-year-old Brown whose marriage to Houston from 1992 to 2007 was plagued by drug abuse, domestic violence and infidelity.

Houston was found dead in a bathtub at the Beverly Hilton Hotel in February 2012.

The 48-year-old had drowned as a result of cocaine use and heart disease, the coroner wrote.

Also in her system were Benadryl, Xanax, cannabis and Flexeril.

Three years later, the couple’s 22-year-old daughter Bobbi Kristina was found unconscious in the bathroom of her home in Georgia.

She died in a hospice six months later following catastrophic brain damage from being submerged in the water.

It was suspected that she may have been injured by Bobbi Kristina’s ex-boyfriend Nick Gordon during a domestic argument, but he was never charged with anything related to the incident.

The Fulton County Medical Examiner’s Office later determined that she died from being immersed in water and drug intoxication that led to pneumonia, however, medical experts were unable to rule whether her death was ‘due to intentional or accidental causes.’

Bobbi was buried two days later next to her legendary mother at Fairview Cemetery in Westfield, New Jersey.

In late 2016, Gordon was found liable in a wrongful death lawsuit brought by the conservator of Bobbi Kristina’s estate, Bedelia Hargrove, and was court-ordered to pay a total of $ 36 million in the case.

In January 2020, Nick Gordon died from a heroin overdose.

Sources said Gordon, 30, had a series of heart attacks after he was rushed into intensive care in Florida amid New Year’s celebrations. 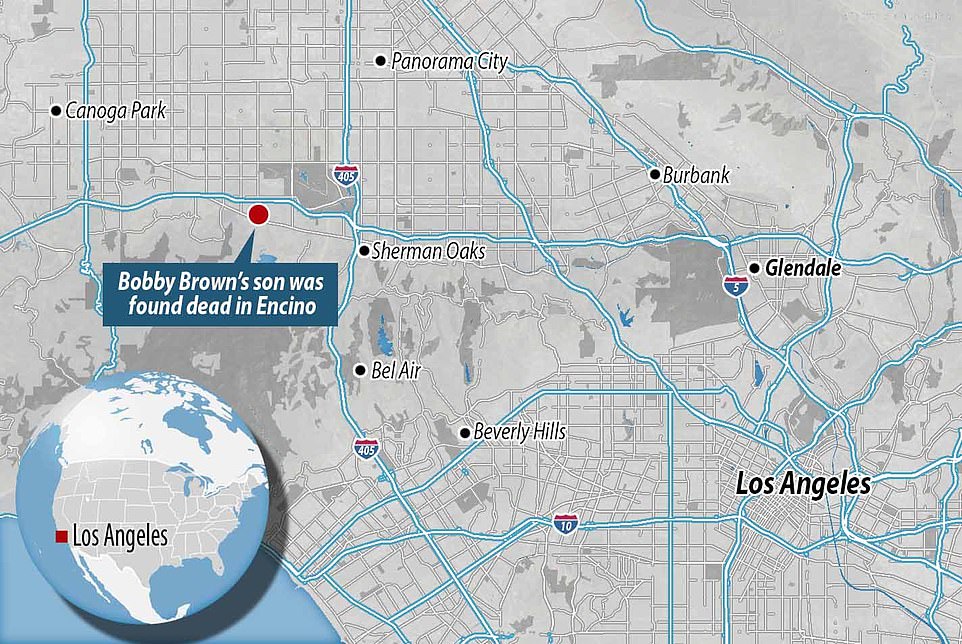 Police rushed to a ‘medical emergency’ at a home in Encino California at 1.50pm on Wednesday 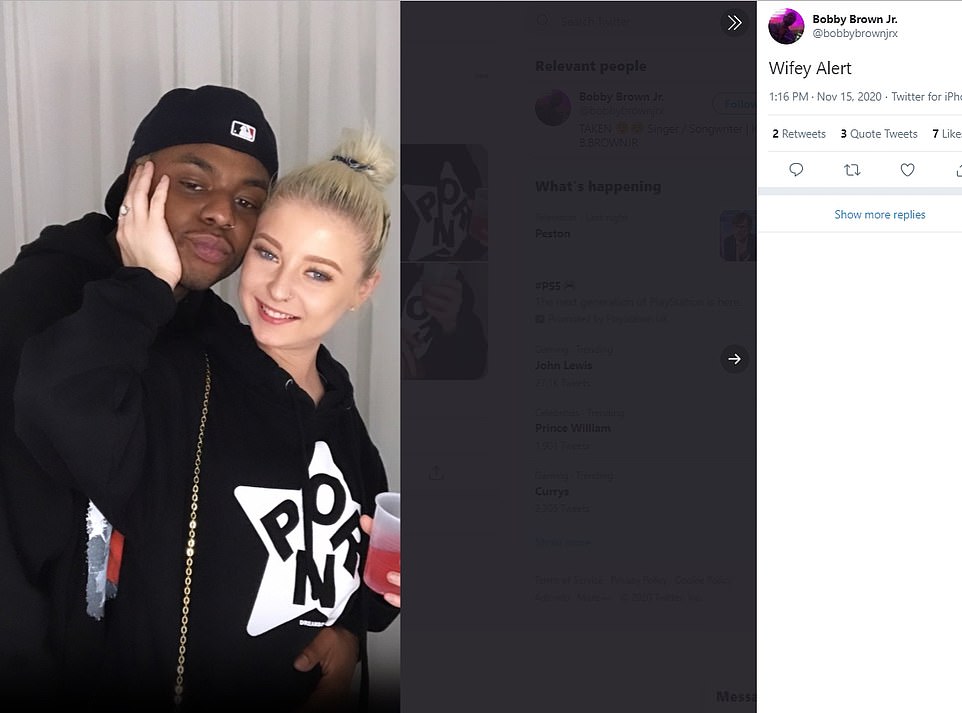 A picture posted on Sunday by Brown Jr. of him being caressed by an unknown woman. He captioned the post: ‘Wifey Alert’ 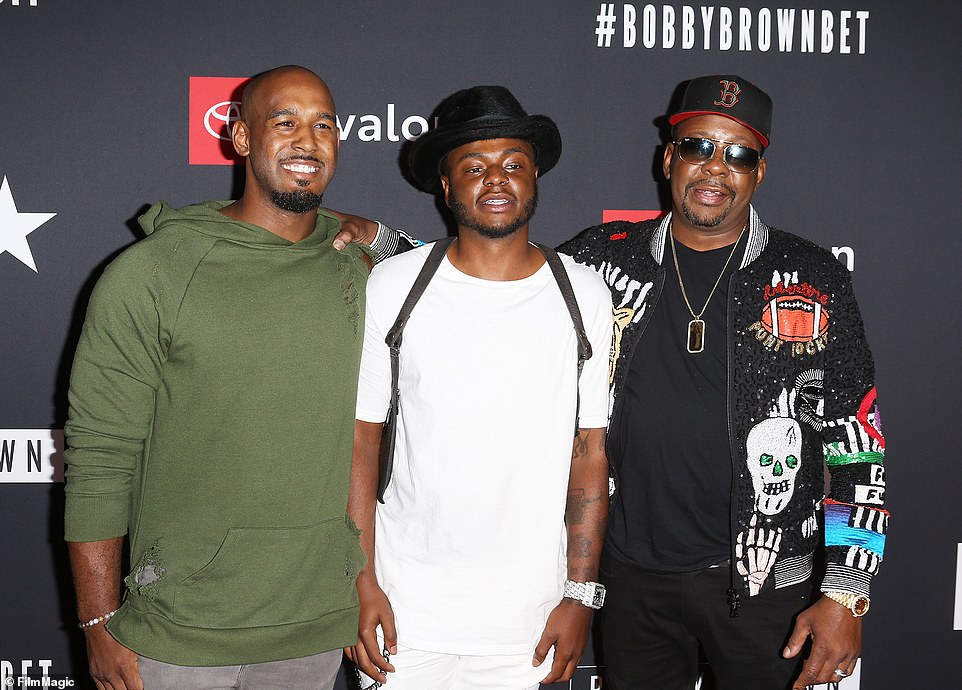 Ongoing: While authorities are still investigating the scene, sources told the outlet ‘they do not believe there was foul play involved’; Bobby Jr. is pictured with his father Bobby Brown and older half-brother, Landon 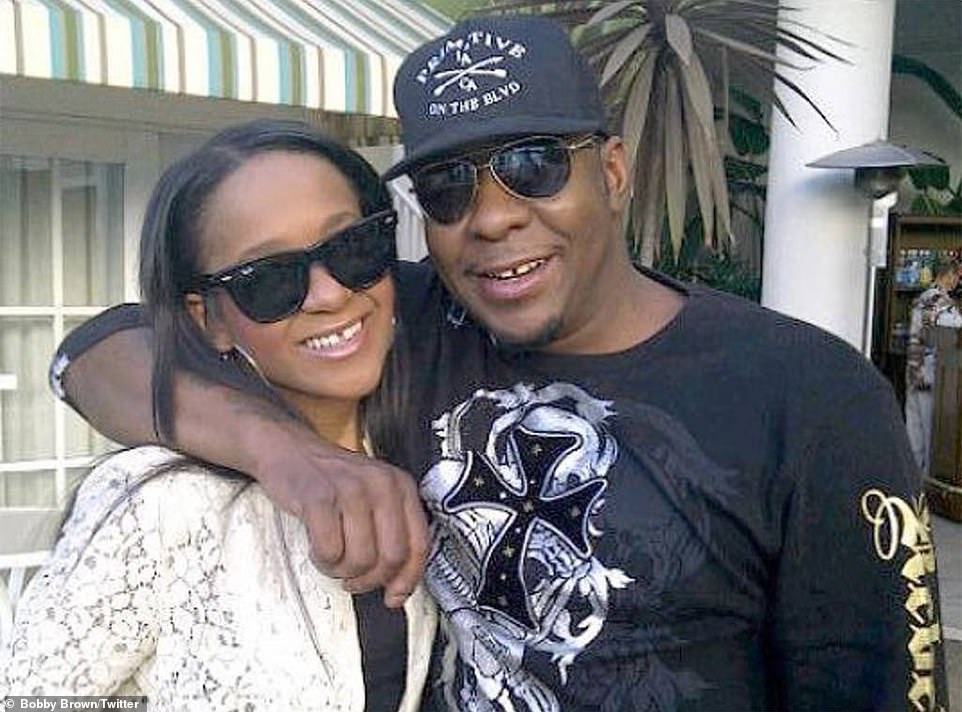 Unimaginable loss: Bobby Jr. is the second child the 51-year-old rapper has lost, just five years after the death of his daughter Bobbi Kristina Brown, who he shared with his late ex-wife, legendary singer Whitney Houston 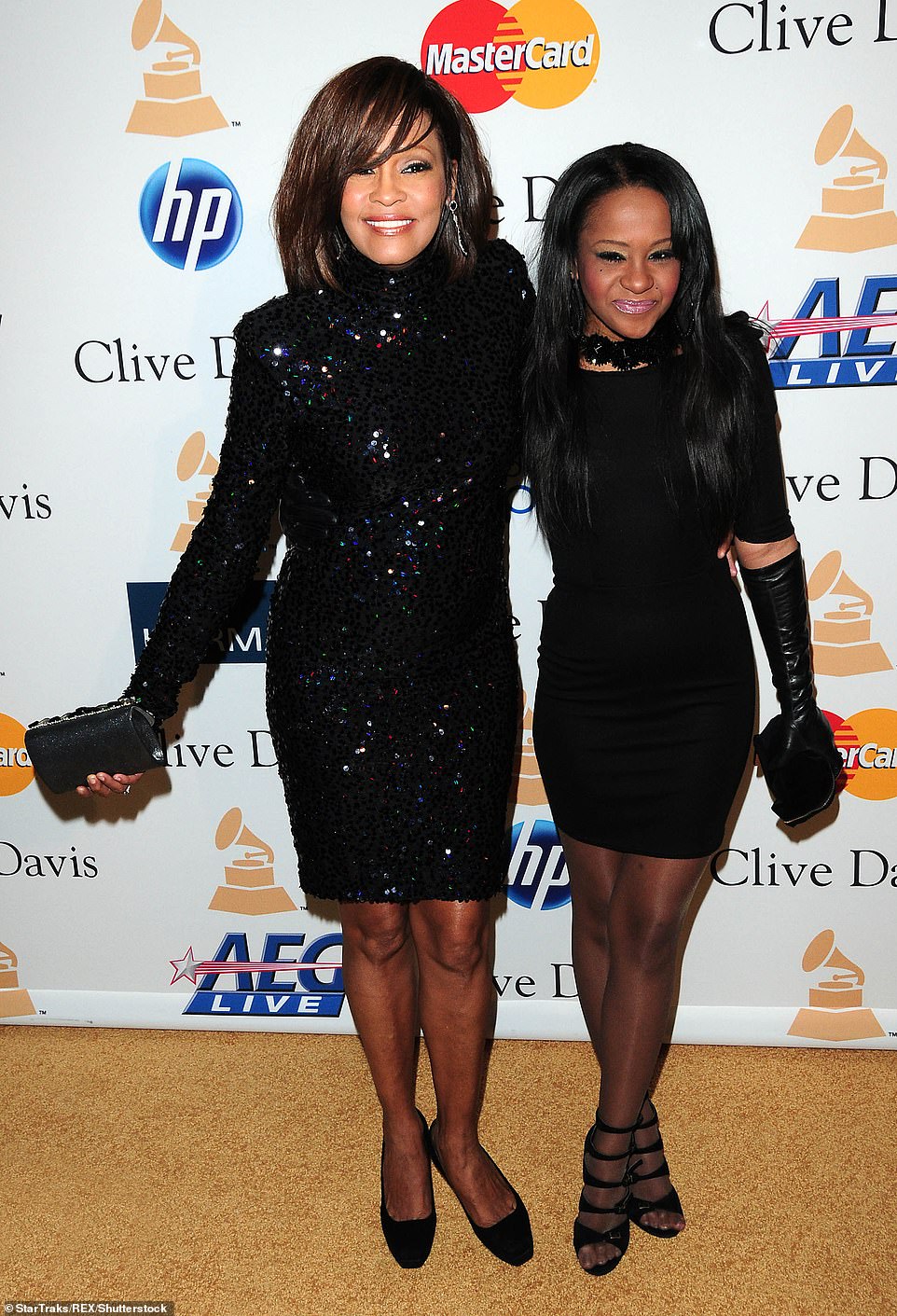 Tragic: Bobbi Kristina died in hospice care on July 26, 2015, nearly six months after she was found unconscious in a bathtub; seen in 2011