Cameron Diaz and Benji Madden have welcomed a baby girl.

The 47-year-old actress, who married the 40-year-old rocker in 2015, shared the surprising news with her fans on Instagram on Friday.

She revealed they have named their newborn daughter Raddix Madden but noted they ‘won’t be posting pictures or sharing any more details, other than the fact that she is really really cute’.

The notoriously private star was pictured looking slim in high-waisted jeans on November 22 while out for lunch in LA, which suggests the pair used a surrogate or adopted.

She wrote on Friday: ‘Happy New Year from the Maddens! We are so happy, blessed and grateful to being this new decade by announcing the birth of out daughter, Raddix Madden. 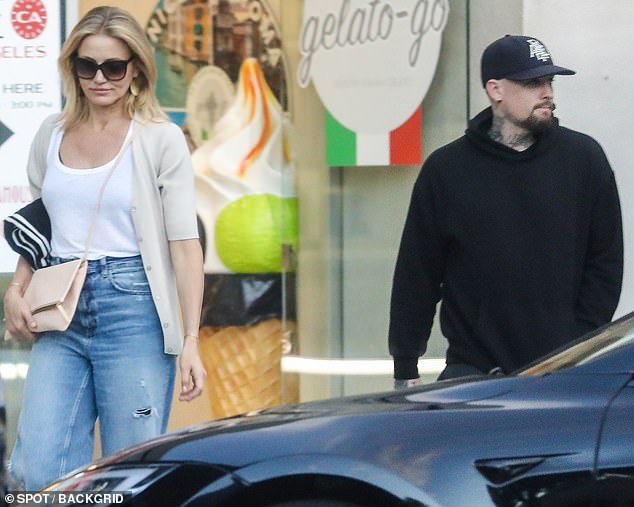 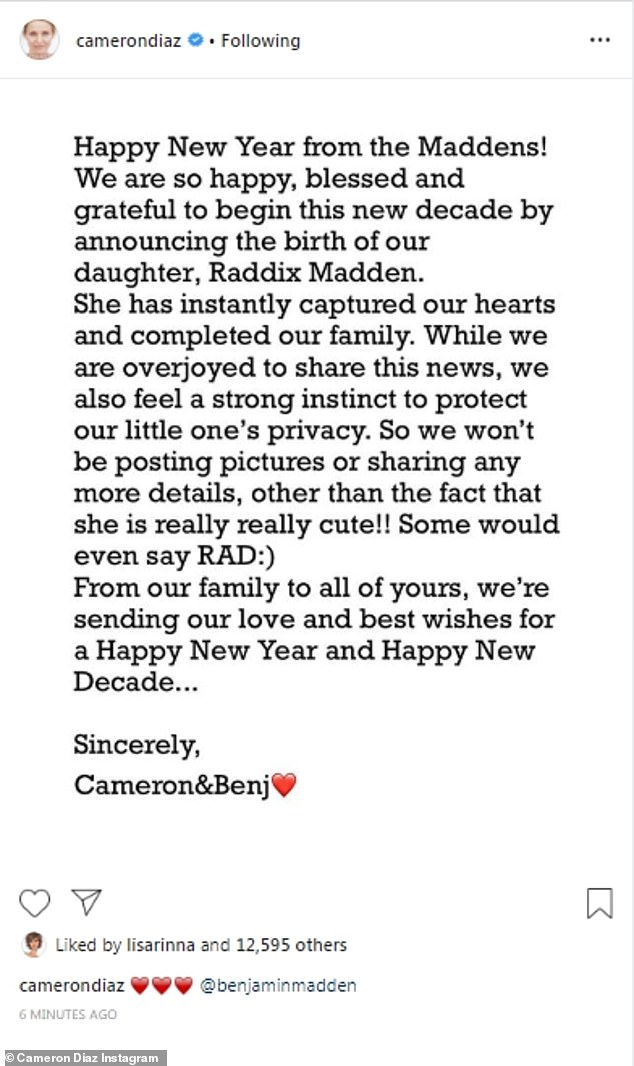 Secret’s out! Cameron said she felt ‘happy’ and ‘blessed’ while sharing the news with her fans on Instagram on Friday

‘She has instantly captured our hearts and completed our family.

‘While we are overjoyed to share this news, we also feel a strong instinct to protect our little’s one’s privacy. So we won’t be posting pictures or sharing any more details, other than the fact that she is really really cute!! Some would even say RAD:)

‘From our family to all of yours, we’re sending our love and best wishes for a Happy New Year and Happy New Decade. Sincerely, Cameron&Benji [heart emoji]’

But it seems marriage prompted a change of heart; just six months after exchanging vows with Benji, sources told People magazine that they were ‘eager’ to have children. 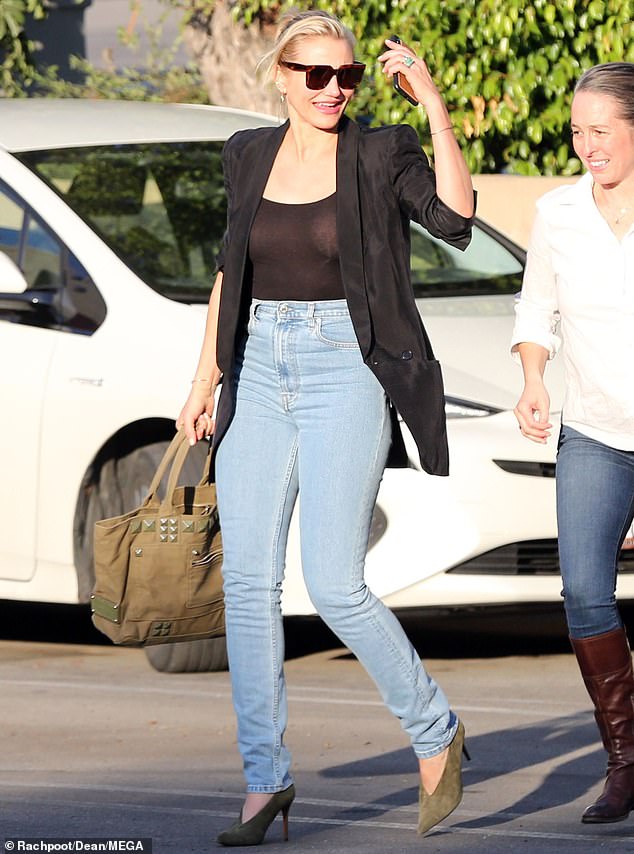 Private: The 47-year-old, seen here looking slim in high-waisted jeans on November 22, made it clear she won’t be sharing details about the baby’s arrival

In August last year, Cameron opened up about their marriage in a rare interview, calling Benji ‘the greatest human being’.

She told InStyle magazine: ‘I just want to build better, stronger friendships with the people who are in it with me. Of course, that includes my husband. Getting married to him was the best thing that ever happened to me.

‘My husband’s the best. He’s the greatest human being, and he’s my great partner. Marriage is certainly hard, and it’s a lot of work. You need somebody who’s willing to do the work with you, because there’s no 60-40 in marriage. It’s 50-50 period. All the time.’

The Bad Teacher star wasn’t sure if she was ‘ready’ for marriage when they got hitched, but she always knew Benji was ‘special’.

She added: ‘I don’t know if I was ready [when I got married], but I knew Benji was special. He’s just a good man. There’s no bulls**t. It’s really refreshing. I’m grateful for him.’

The There’s Something About Mary star – also known for her roles in The Mask, Charlie’s Angels and Shrek – stepped away from her A-list Hollywood career following the release of her film Annie six years ago and last year wrote a women’s health guide called The Longevity Book.

She recently insisted she’s in no rush to return the spotlight. 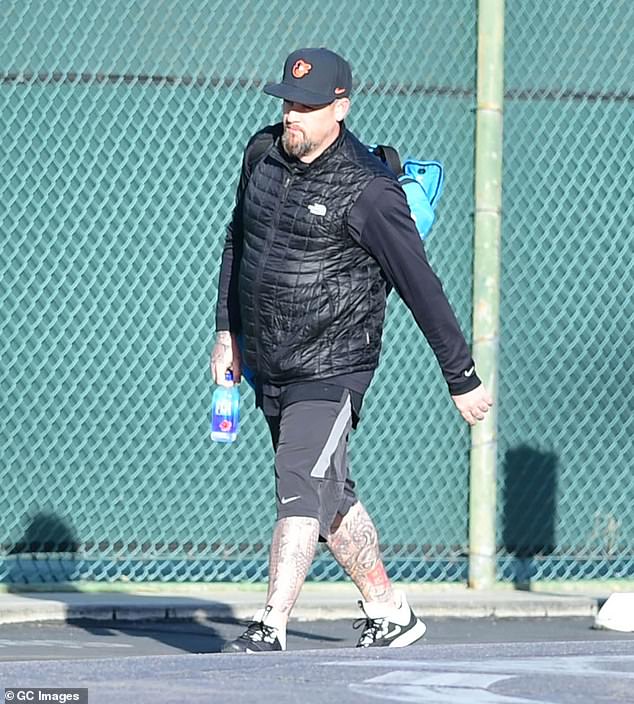 Daddy! Benji was spotted out in LA on Friday after the baby announcement

She explained: ‘The way I look at it is that I’ve given more than half of my life to the public. ‘I feel it’s OK for me to take time for myself now and choose how I want to come [back] into the world. If I decide to.

‘I don’t miss performing. Right now I’m looking at the landscape of wellness and all that. But whatever I do, it has to be something I’m passionate about – something that just feels effortless.’

Cameron began dating Benji in May 2014 and they were married at her Beverly Hills home the following January.

Their guests included Benji’s twin brother and Good Charlotte bandmate Joel, his wife Nicole Richie and their two children Sparrow and Harlow. (Nicole and Cameron are best friends as well as sister-in-laws.)

Drew Barrymore, Gwyneth Paltrow and Reese Witherspoon were also among the guests.

Cameron dated a string of famous celebrities before finding happiness with Madden, including Justin Timberlake, Jared Leto and Alex Rodriguez. 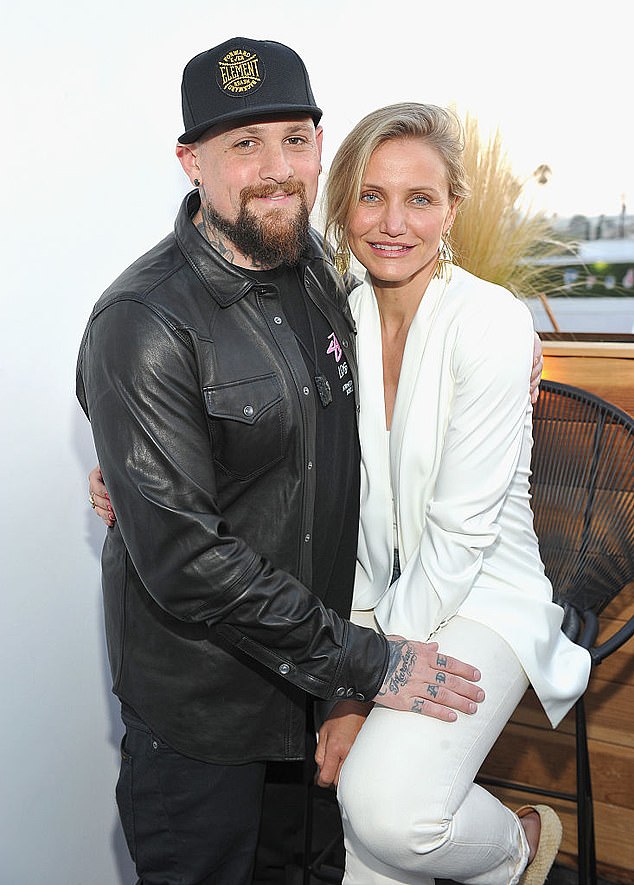 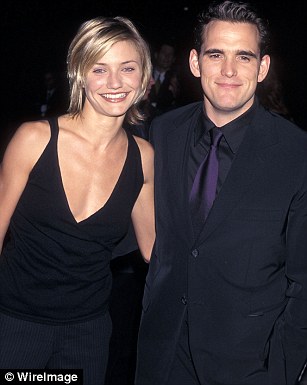 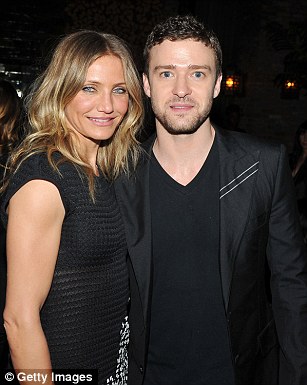 Cameron dated There’s Something About Mary co-star Matt Dillon for three years before splitting in 1998. He previously told Parade magazine that their romance failed because she was not ready to settle down and start a family.

After Dillon, she dated Oscar-winning actor and Thirty Seconds To Mars frontman Jared Leto for four years, reportedly, as their relationship was kept very private.

Cameron famously romanced former NSync member and solo artist Justin Timberlake from 2003-06. Despite their romantic past, the two were able to work together on 2011 comedy Bad Teacher. She told Us Weekly at the time that it actually was not awkward working together as she said: ‘No, It’s great. Justin and I always had a good laugh together.’

The Mask star was romantically linked to pro surfer Kelly Slater in 2007. According to People, the pair spent some time together surfing in Hawaii. They two were friends for some time as he joined her for a conservation expedition to Honduras for her MTV reality show Trippin’.

Sean Combs, also known as P. Diddy, also romanced the blonde beauty in 2008. In November, Us Weekly reported that the rapper was overheard gushing over the Charlie’s Angels star gushing, ‘She’s the sexiest girl in the world.’ He also said things would be different if he could turn back time.

Cameron dated handsome British model Paul Sculfor for a year, with him even briefly living with the actress at her LA home. Their busy careers and distance were blamed for the split

Cameron dated New York Yankees professional baseball player  Alex Rodriguez from 2010-2011. In 2012, the athlete gushed to Us Weekly about his ex as he said: ‘But I will tell you about CD: She’s probably one of the greatest human beings I’ve ever met, and just an amazing light.’ 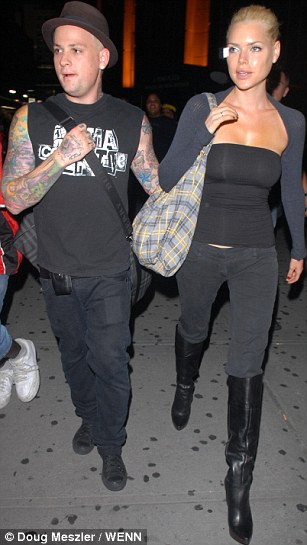 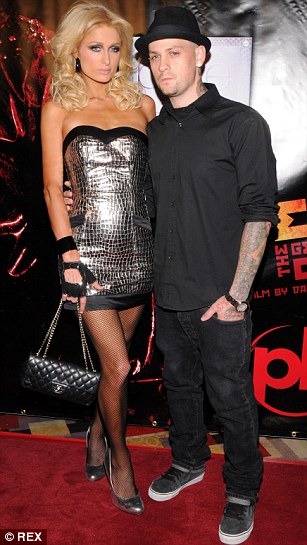 Benji dated British-born Australian singer Sophie Monk for three years. The pair were engaged in 2007 only to have an amicable break up the following year.

Less than two weeks after his broken engagement with Monk, the Good Charlotte guitarist was spotted with Paris Hilton. They dated for nine months before breaking up due to Benji being overprotective and not getting along with her friends.

Benji was romantically linked former Playboy Playmate and Girls Next Door reality star Holly Madison. They were first spotted together at a coffee shop in LA together, but the relationship seemingly fizzled out months later.

The Madden Brothers performer dated British singer-songwriter Eliza Doolittle for about a year. She reportedly used the relationship as inspiration to write a few of her songs including No Man Can and I’m In Love With You