Cardi B learns she’s got FIVE Grammy nominations as she leaves court… before gushing ‘my life is a movie!’

She was up bright and early on Friday to answer assault charges.

But as she left court Cardi B got some good news – as a reporter informed her she had five Grammy nominations.

Sticking out her tongue at the news, the clearly delighted singer was grinning and jubiliant. 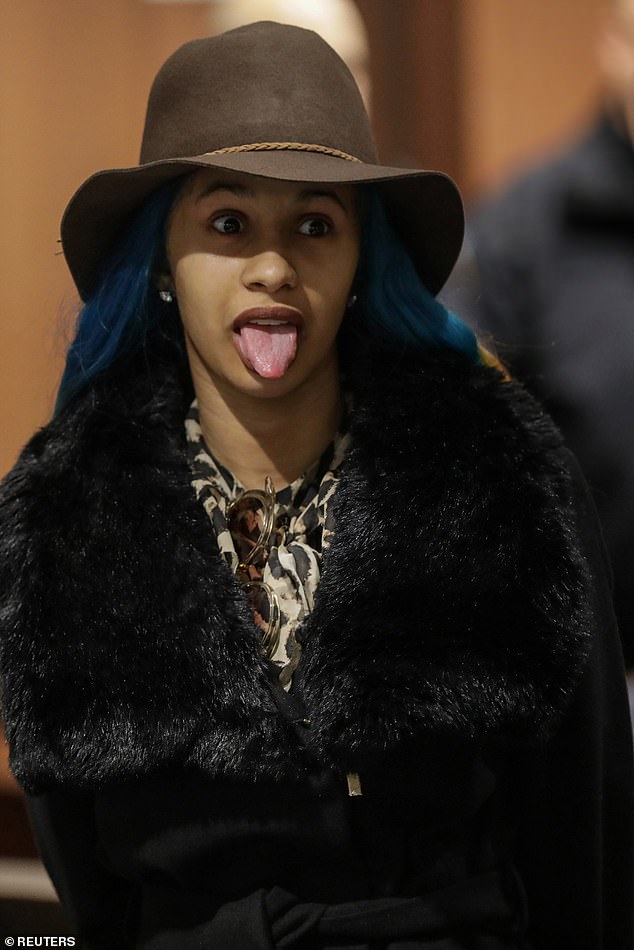 Day in court: Cardi B stuck out her tongue as she learned of her Grammy nominations after appearing in court in Queens, New York on Friday 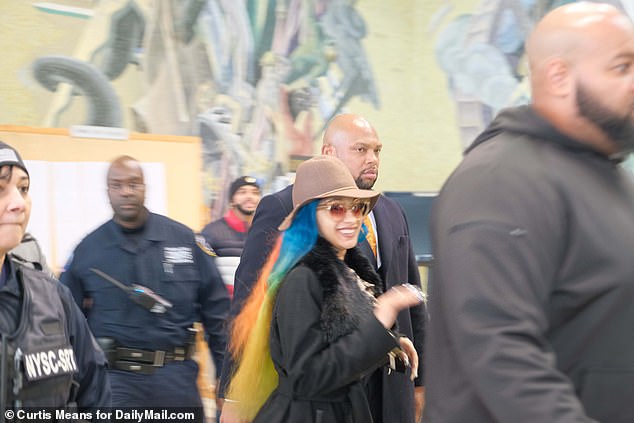 High spirits: The singer smiled from ear to  after getting the good news

She gushed later on Instagram: ‘What a way to find out i got 5 Grammys nominations I’m tellin you my life is a movie.

‘I work my ass off for this! Win or not at least i know i had a chance and people was watching and admiring my work. Im Soo happy! THANK YOU!’ 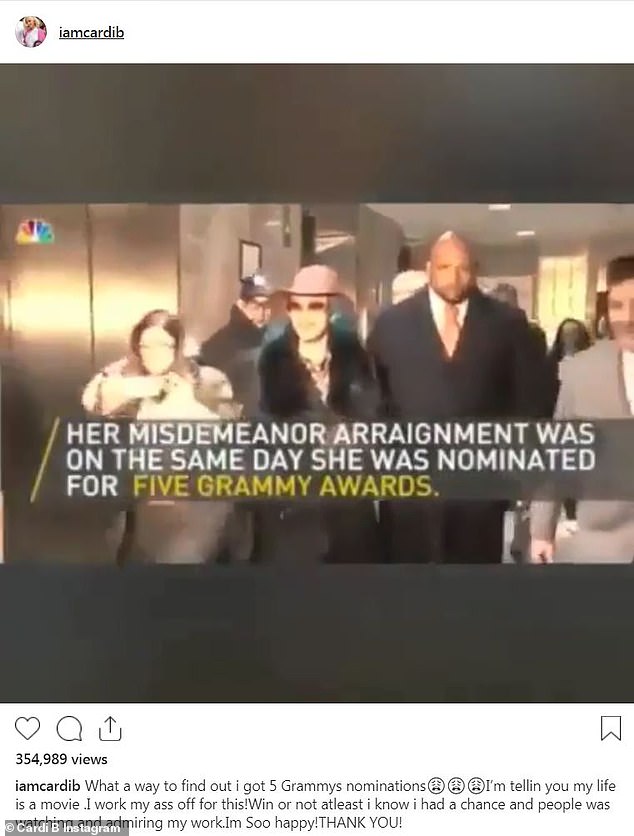 ‘Sooo happy!’ Cardi’s joy at her nominations was obvious

Before learning of her triumph, Cardi was in court where  a New York judge ordered her to have no contact with two bartenders she allegedly attacked in a strip-club brawl, but allowed her to remain free after she skipped a court appearance earlier in the week.

Queens Criminal Court Judge Scott Dunn allowed the hip-hop star, whose real name is Belcalis Almanzar, to remain free without bail, a spokeswoman from the Queens District Attorney’s Office said. The judge had threatened to have her arrested for not showing up in court on Monday. 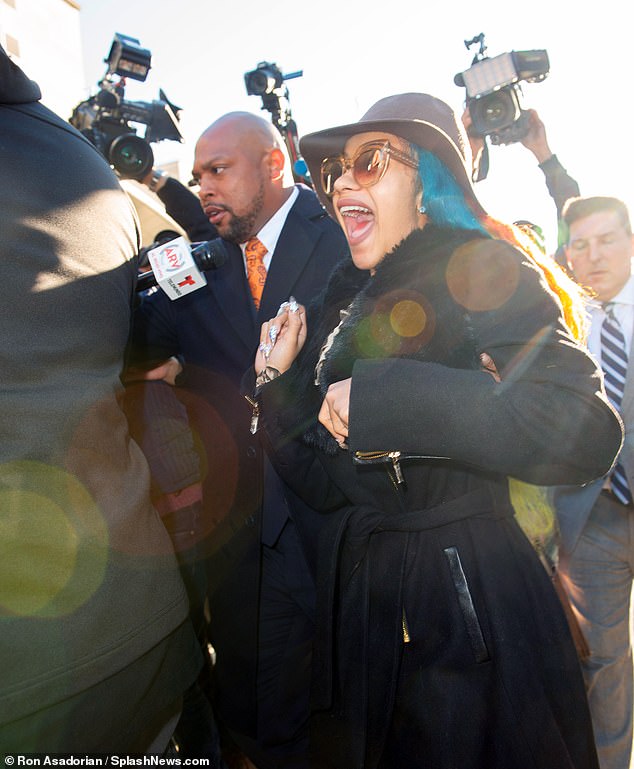 What a morning: The rapper wore a fur coat, floppy beige hat, and a head full of vibrant blue, yellow, and red locks 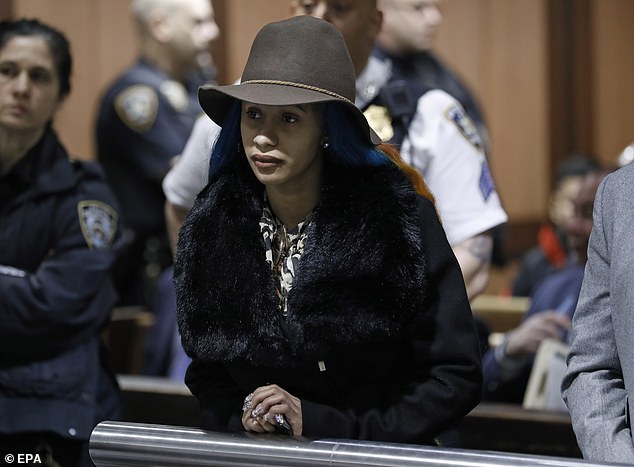 All ears: Inside the court the singer gave the hearing her undivided attention

Cardi B, 26, is charged with reckless endangerment, harassment and assault for allegedly throwing bottles and chairs in the Angels NYC strip club in the New York City borough of Queens after getting into an argument with two of the club’s bartenders early on the morning of August 29, according to police.

The singer had accused one of the bartenders of having an affair with her husband, Offset, a member of the rap trio Migos, local media have reported. 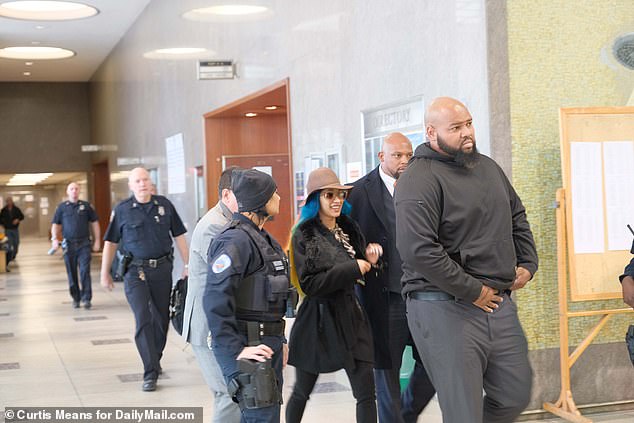 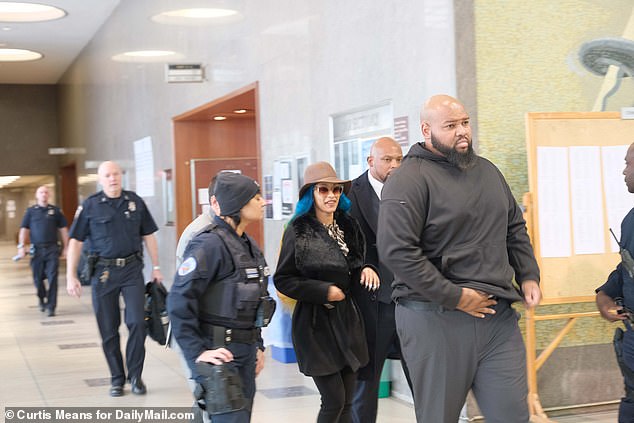 Making her way: The chart-topper made her way through the courthouse

The couple was in the news earlier this week when Cardi B announced on Instagram that she had broken up with Offset, whose real name is Kiari Cephus.

Cardi B’s lawyer, Jeff Kern, did not immediately respond to a request for comment, nor did Joe Tacopina, an attorney representing the two bartenders.

She is due back in court on January 31 to face the misdemeanor charges. She could serve up to one year in prison, if found guilty.