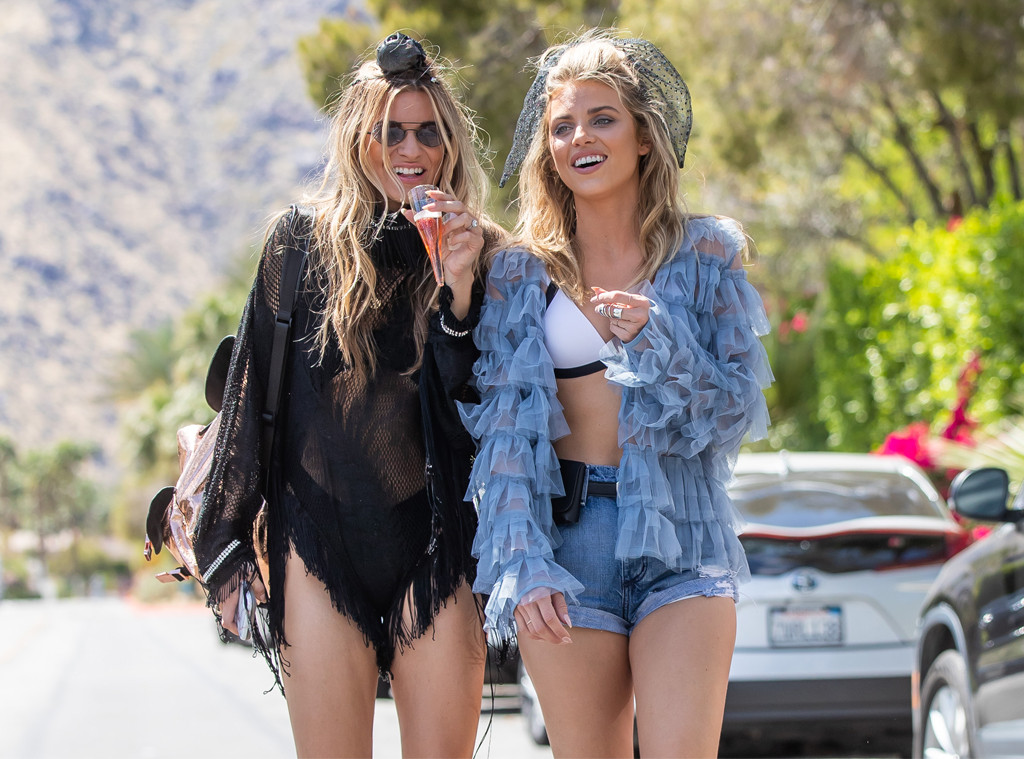 Weekend 1 of the world-famous music and arts festival kicks off Friday, attracting hundreds of thousands music lovers, fashionistas and stars to the Southern California desert for the next three days.

Ariana Grande, Childish Gambino and Tame Impala nabbed top billing for the event, and other scheduled performers include Kacey Musgraves, Janelle Mon&áe, J Balvin and Idris Elba. On Sunday, April 21 Kanye West is set to hold a Coachella-inspired version of his “Sunday Service” gathering for attendees.

But these days, Coachella is about so much more than the music. Not only has it become the destination for fashion trends to break ground, but many of your favorite celebs consider it an annual tradition to hit up the exclusive party circuit and rock out to their favorite artists. That’s why E! News is granting you a behind-the-scenes look at the star-studded fest.

Check out every single celeb sighting at Coachella below:

One of the fashion queens of Coachella looks trendy in ripped jeans and a bandeau top.

The married couple get cozy at the TAO X Revolve Desert Nights bash.

The group couples up at the TAO X Revolve Desert Nights bash.

The Real Housewives of Beverly Hills star poses with her husband at NYLON‘s Midnight Garden Party.

Wearing a CAMILLA dress, Child of Wild jewelry, and Frye Company shoes while carrying a  Gucci backpack, the Queen of Coachella stops by the Amazon lockers to grab some festival faves.

The Real Housewives of Beverly Hills star is also spotted by the Amazon lockers.

The star appears with a face mask as she gets ready to perform with Jaden Smith.

The rapper appears onstage during a surprise set with Selena Gomez, Ozuna and DJ Snake.

Selena Gomez and Cardi B

The two perform onstage with Ozuna and DJ Snake.

The singer showcases a smoldering gaze at the YouTube Music Artist Lounge.

The star appears with an unidentified male friend.

The singers appear at the YouTube Music Artist Lounge. They are the first K-Pop girl girl group to perform at Coachella and YouTube live-streamed their performance in Times Square in New York City.

“Doin the damn thing out here in the desert,” the reality TV star wrote online.

Sister, sister! The duo look stylish while sipping on Martinelli’s during Day 1.

The fashion designer rocks a floral maxi at her 5th Annual ZOEasis Party.

The social media personality, who made a surprise appearance during Jaden Smith‘s performance, goes for a lime green look.

The Guava Island star looks ultra zenned-out in a casual-looking ensemble at the premiere on Thursday.

All smiles here! The actresses pose for a photo at the Guava Island premiere.

Mommy and me! The Bachelor Nation starlet brings her little girl along for the festivities at Luxury Experience & Co Desert’s Coachella event.

The rapper gears up for his performance.

“Get in loser, we’re going to Coachella,” the Vanderpump Rules star captions this snapshot.

It wouldn’t be Coachella without a cute floral dress and a casual peace sign.

All aboard! This One Direction star is heading to the desert in style.

Clearly, Revolve’s party at Coachella is the place people want to be.

Sunshine, friends and a cute bikini is all this Victoria’s Secret model needs for a fun weekend at the festival.

Take me to the desert! The Victorious star sports a rosy pair of Rad + Refined sunnies on Day 1.

The Bachelor in Paradise alum hits up Day 1 in a denim mini skirt and boho chic blouse.

Meow! The supermodel puts a new spin on animal print.

The performer stays cool as he braves the scorching temperatures of Indio, Calif.

Stay tuned to E! News for around-the-clock coverage of Coachella 2019!