From Kaia Gerber to Ireland Baldwin: See Look-Alike Models With Their Famous Parents 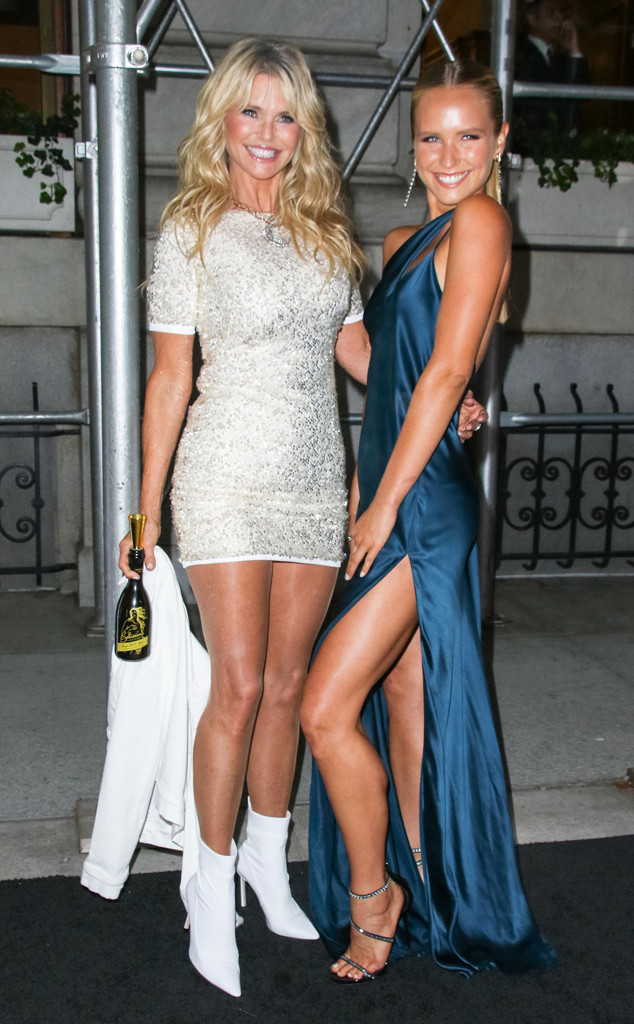 The apple doesn’t fall far from the tree!

The runways of Fashion Week are filled with models who could be doppelgangers for their famous parents.

It’s no surprise that Kaia Gerber has quickly risen to the top of the fashion ranks with the same stunning looks as her supermodel mother, Cindy Crawford. Her older brother, Presley Gerber, has also joined in the family business as a model for Dolce & Gabbana, Calvin Klein and more.

Christie Brinkley appeared in the pages of the Sports Illustrated swimsuit edition eight times from 1975 to 2004. Her daughter, Sailor Lee Brinkley-Cook, become the first-ever second generation SI Swimsuit model in 2017. In fact, her mother joined in on the photo shoot and the duo posed together for the iconic magazine.

Ireland Baldwin, the daughter of Kim Basinger and Alec Baldwin, also followed in her mother’s footsteps when she made her runway debut at the Heart Truth Red Dress collection show during New York Fashion Week in 2014.

See more models with their famous parents below!

Sean “Diddy” Combs‘ son, who bears a striking resemblance to his famous father, made a name for himself in the modeling world by walking in shows for brands including Dolce & Gabbana and Sera. He also became the face of Dolce & Gabbana’s Spring 2018 ad campaign.

Stephan Baldwin‘s famous daughter has been a runway staple since 2014. She has walked in shows for Topshop, Tommy Hilfiger, Jeremy Scott and more. The younger Baldwin also appeared on the covers of Marie Claire and Elle.

The apple doesn’t fall far from the tree! Julianne Moore‘s gorgeous daughter has taken to the catwalk to model J. Crew’s latest looks.

The look-alike children of Cindy Crawford and Rande Gerber both become models as teenagers. Kaia Gerber made her runway debut for Raf Simons‘ Calvin Klein Collection and has since become one of the sought-after models in the industry. Older brother, Presley Gerber, has walked in high-profile shows for Dolce & Gabbana, Calvin Klein and more!

Jamie Foxx‘s beautiful daughter has strutted down the catwalk at fashion shows around the globe. From Dolce & Gabbana in Milan to Sherri Hill in New York, Foxx is a runway star no matter where she goes.

Ewan McGregor‘s stunning daughter is one to watch in the fashion industry. She has walked for Dolce & Gabanna as well as taken part in an editorial campaign for Town & Country.

The splitting-image daughters of Lisa Rinna and Harry Hamlin are both no strangers to the modeling world. Deliliah Belle Hamlin has walked in shows for Tommy Hilfiger and Dolce & Gabanna. Her sister, Amelia Gray Hamlin, become the face of Hudson Jeans.

Sofia Vergara‘s son scored a Paper Magazine spread for his modeling debut in 2016.

Are we seeing double? Reese Witherspoon‘s daughter, who looks just like her mother, kicked off her modeling career by being featured in the look book for Rodarte’s Fall 2018 collection.

The daughter of Kim Basinger and Alec Baldwin walked in her first runway at the Heart Truth Red Dress collection show during New York Fashion Week in 2014.

Snoop Dog‘s son left his college football days behind for a career in entertainment. He has since walked the New York Fashion Week runway for Phillip Plein and nabbed campaigns for MCM Worldwide and Kenneth Cole.

Pamela Anderson and Tommy Lee‘s lookalike sons are runway ready. Dylan Lee was named the face of Saint Laurent in 2017 while brother, Brandon Lee, has walked for Dolce & Gabbana on multiple occasions.

Daniel Day-Lewis‘ son might just be his carbon copy. In addition to being a musician, Gabriel-Kane Day-Lewis has walked in a Chanel show and took part in a campaign for Hudson Jeans.

Some people may know Zoë Kravitz as an actress; however, Lenny Kravitz and Lisa Bonet‘s daughter is also a bona fide model. She was named the face of Vera Wang’s Princess and Preppy Princess fragrances.

You might as well call Andie MacDowell‘s daughter her mini-me. Sarah Margaret Qualley made her modeling debut as a teenager walking in the Alberta Ferretti show during NYFW. She has also taken part in shows for Chanel and Valentino.

It’s no secret that Scott Eastwood looks like a young version of his father, Clint Eastwood. The younger Eastwood has modeled for Hugo Boss and Davidoff.

Tali Lennox is the daughter of legendary singer, Annie Lennox, but she has focused her career on modeling instead of music. She has worked with fashion houses including Acne Studios, Christopher Kane, Prada and Miu Miu.

Andy Gracia‘s daughter is working to diversify the runway as a curve model. She has walked for Christian Siriano and been featured in campaigns for Lane Bryant and Target.

The daughter of Camille Grammer and Kelsey Grammer made her runway debut at the Malan Breton show during New York Fashion Week in 2016.

It runs in the family! Sailor Lee Brinkley-Cook, the daughter of Christie Brinkley, followed in her mother’s footsteps when she was featured in Sports Illustrated Swimsuit 2018.

Mick Jagger should certainly be proud of his daughter, Georgia May Jagger, who was named Model of the Year at the Fashion Awards by the British Fashion Council. She has modeled for Chanel, Miu Miu, Versace, H&M and more.

Brooklyn Beckham proves that good looks run in the family. In addition to being a photographer, he has also jumped in front of the camera for Polish clothing company, Reserved, Man About Town and T Magazine.

At 23 years old, Val Kilmer is already a seasoned model having worked with Saint Laurent since he was a teenager. He has also followed in his father’s footsteps by starring in movies including The Nice Guys and Palo Alto.

Back in 2004, Riley Keough appeared with mother, Lisa Marie Presley, and grandmother, Priscilla Presley, on the cover of Vogue. Since then, she has taken to the catwalk for Christian Dior, Victoria Secret, Anna Sui and more.

The daughter of Patti Hansen and Keith Richards jump started her modeling career with a Tommy Hilfiger campaign. Since then, she has became the model and muse for 4Stroke Jeans.

Talk about strong genes! Jack Marsden, who could easily be mistaken for a young version of his father, James Marsden, made his runway debut at Dolce & Gabbana show.

Say hello to these model siblings! With the support of their parents Yolanda Hadid and Mohamed Hadid, Gigi Hadid, Bella Hadid and Anwar Hadid are have all become some of the most recognizable names in the industry.

With the support of her famous family, Kendall Jenner was named the world’s highest paid model by Forbes in 2018. She has walked in shows for major fashion houses including Chanel, Alexander Wang, Diane von Fürstenberg, Donna Karan and more.

We can’t get enough of seeing Willow Smith and Jaden Smith pose on the red carpet with their parents, Will Smith and Jada Pinkett Smith. Willow walked the runway at the Christian Dior show during Paris Fashion Week in 2018. Brother Jaden modeled for Louis Vuitton in 2016.

Embodying her mother’s flair for entertaining, Madonna‘s daughter rocked a shell chain bra for her runway debut at the Gypsy Sport show in 2018.

Ray Liotta‘s daughter has modeled for Brandy Melville and Chanel. She also may have gotten the acting bug from her father. She has starred in the films, Mississippi Requiem and Pretty Face.

The daughters of Sylvester Stallone and Jennifer Flavin may come from Hollywood royalty but they are also becoming big names in the fashion industry. They have walked for brands including Chanel, Dolce & Gabbana and Topshop.

Lionel Richie‘s daughter was only 14 years old when she started modeling. She has since been featured in campaigns for Chanel, Dolce & Gabbana, Tommy Hilfiger and more.

We can’t get enough of seeing the models who are taking over Fashion Week who share a striking resemblance to their A-list parents. Which model do you think looks most like their famous folks?