There is no doubt that stars know to bring the wow factor to the E! People’s Choice Awards.

Last year, A-listers made heads turn in gorgeous gowns and fun mini dresses and we are expecting the same when the nominees walk the red carpet at this weekend’s PCAs.

Khloe Kardashian was a standout at last year’s show when she rocked a white strapless gown with a high slit. She completed the look with glittering hoops and her signature half-up, half-down hairdo. Her sister, Kim Kardashian also stunned in a sheer vintage Jean Paul Gaultier dress.

We couldn’t get over Chrissy Teigen‘s incredible PCAs look. She kept it fun and flirty in a sparkling patterned mini dress from Zuhair Murad for her appearance at one of Hollywood’s biggest nights.

Shay Mitchell was equally stunning in a two-toned gown when arriving at last year’s show. We love that she opted for a sleek, low ponytail for the People’s Choice Awards. 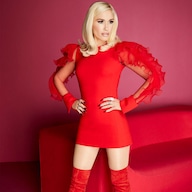 They weren’t the only celebrities who brought their fashion A-game to the red carpet. Check all the best looks from last year’s show below and don’t miss the 2019 People’s Choice Awards airing live this Sunday, Nov. 10 at 9 p.m.

The Keeping Up With the Kardashians star looks angelic in a white gown with a high slit and nude heels.

The star is gorgeous in a forest green floor-length dress with black pumps and a chic bob hairstyle.

For an awing look on the red carpet, Chrissy opted for a mini dress with pink, green, black and cream embroidery from Zuhair Murad.

Bodycon dresses just reached a new level, thanks to the Keeping Up With the Kardashians star and her sheer, vintage Jean Paul Gaultier dress from What Goes Around Comes Around.

The star kept it simple with a form-fitting LBD, then added a sparkling black pumps to make a statement at the award ceremony.

The actress opts for a red and black corset with a reversed heart-shaped neckline, paired with black pants.

The former Pretty Little Liars star wore an eye-catching two-toned dress on the red carpet with a sleek, low ponytail.

The comedian looks lovely in a black bodysuit with a patterned coat.

The star dazzles in a cerulean dress with gold sequins and matching thigh-high boots.

The Black Panther actress is bold and beautiful in a colorful skirt with feathers.

The actress stuns a midi dress with a black and white print and yellow accents.

The This Is Us star dons a three-toned dress with an ombre effect from Georges Chakra, and pairs it to silver heels, a black clutch and chandelier earrings.

The Total Divas star revealed a two-toned top with off-the-shoulder details and cutouts and it’s epic.

The star dazzles in a gown with lots of textures, thanks to the sequins and feathers.

The actress takes pinstripes to the next level with a long-sleeve pink, red and white gown.

The blogger made an impact on the red carpet carpet with sheer, embellished mermaid gown and a pale pink box-shaped purse from The Daily Edited.

The TV host brought a sultry look to the red carpet that made us take a second look. Her gown features flowing raspberry fabric with nude accents along the plunging neckline to create a whimsical fall look.

The beauty blogger went for bold in dress with a bright animal prints and a black and gold waist belt.

The Vanderpump Rules star tried on a major trend: suiting. However, to stand out, she chose a suit with a colorful pattern.

The Australian star masters fall suiting at the award show with red oversized jacket and pants and fur-lined cuffs. To finish the look, she added a matching headband.

The Colombian star stepped on to the red carpet with a look you couldn’t miss. Between her larger-than-life sleeves and feathered bag, her style was epic.