The 48-year-old host was accosted at a public event last year by a sweaty man claiming to be the father of her child according to The Blast on Friday.

The Italian-born celebrity chef originally filed for a temporary order against the same man in May, though it wasn’t put into place after she and her counsel failed to appear for a hearing. 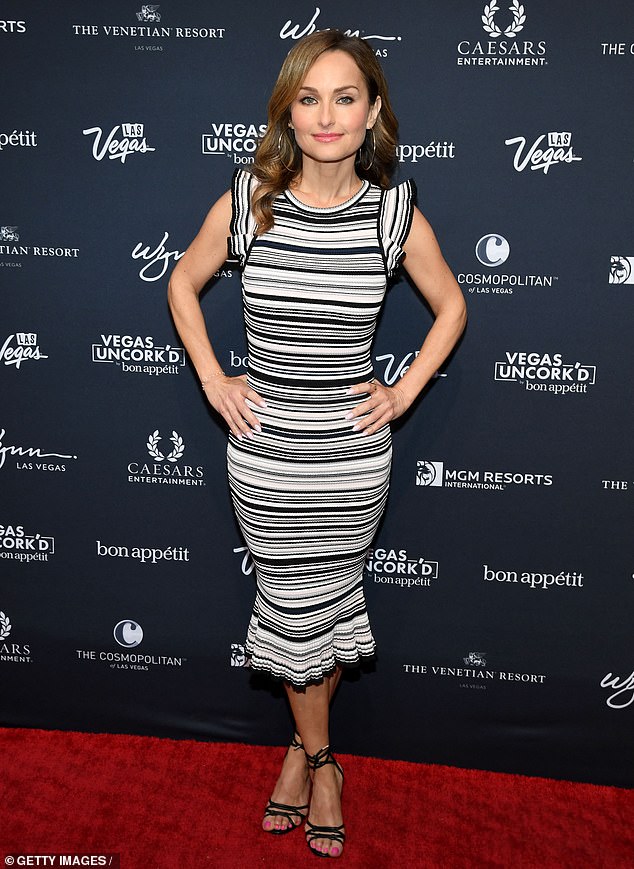 Creeper: Giada De Laurentiis, 48, was awarded a five-year restraining order against a fan, whose name has not been revealed, according to The Blast; pictured May 10 in Las Vegas

Following a hearing in which both Giada and the alleged stalker testified, a judge awarded her a restraining order that will remain in place until June 13, 2024.

The man will now have to stay at least 100 yards away from her home and workplaces, and he’s not permitted to attend any of her public book signings.

In court documents, the Giada At Home star said she hired a private investigator to contact the man about messages he sent through her website.

She described the messages as initially being harmless, but in March 2018 he began sending more concerning personal messages.

A March 12 message read: ‘I have loved you since the first day I ever met you and I haven’t stopped . . . I love you with all of my heart and soul, even still — I have never met a woman more beautiful than you — both inside and out.’ 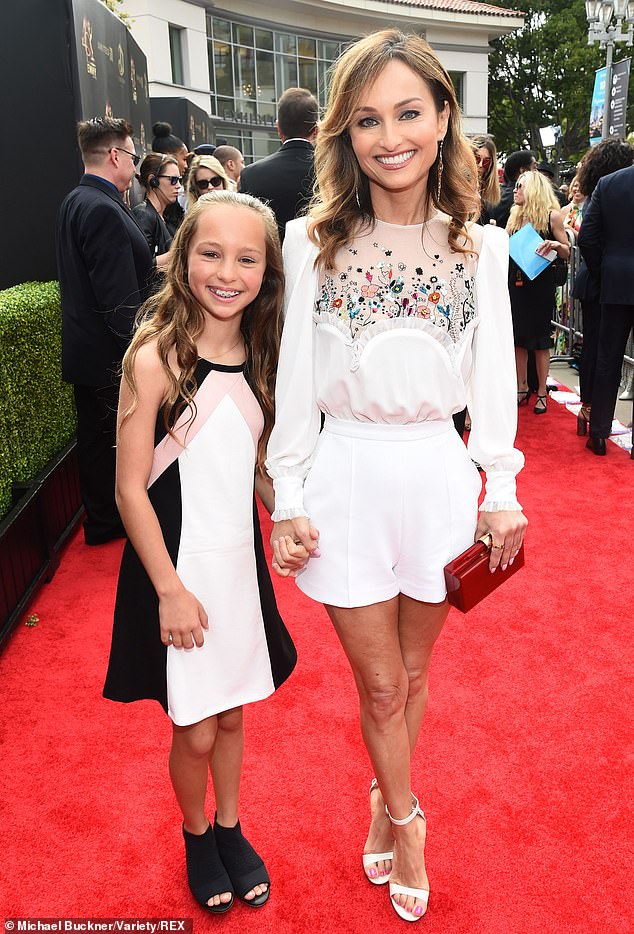 Delusions: The celebrity chef claimed the man messaged her website repeatedly, claiming he was the father of her daughter Jade, 11, and had received a $ 150,000 check from her; pictured with Jade (L) in May

By April, the man’s messages began referencing her 11-year-old daughter Jade Marie, and he also claimed that Giada had given him a $ 150,000 check in the past.

In a frightening development, the stalker showed up at an LA book signing to see her on May 1, 2018.

She claimed he was ‘shaking and sweating’ and wanted to speak to her alone. He ‘demanded’ to talk to her after her personal security stepped in, and the store security joined in to eject the man from the book store.

According to the TV star, her private investigator called up the alleged stalker a week later, at which point the man ‘stated he was in love with me, that I had pursued him in a relationship and that he was the biological father of my child.’

After the investigator threatened to legal repercussions if he didn’t leave Giada along, the man said that ‘as a father he had a right to see his child if he wanted.’ 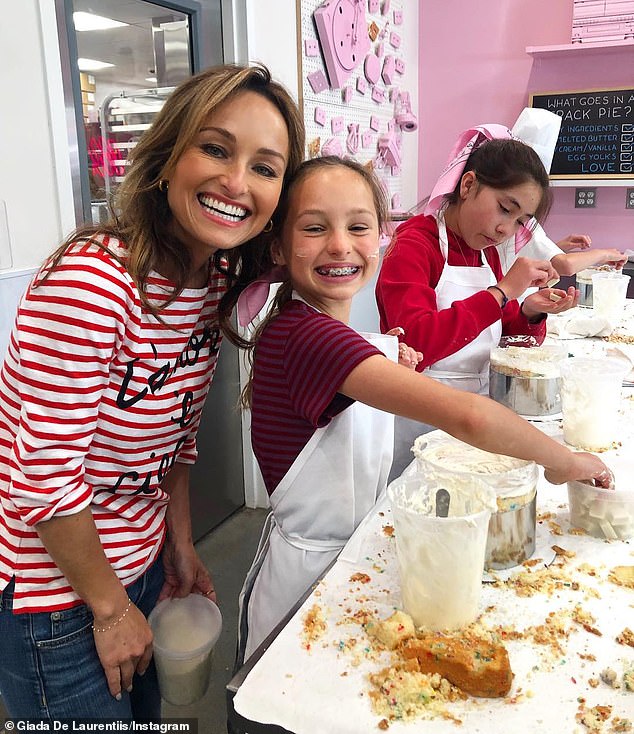 Scary! Despite warnings to keep away from Giada’s PI, the man showed up ‘shaking and sweating’ at an LA book signing and asked to talk to her alone

The LAPD’s threat management unit got involved on May 15 and instructed the man never to contact De Laurentiis, which he agreed to, yet two days later he sent the investigator another email, writing ‘[P]lease don’t stop me from going to her public appearances or pursuing her in a reasonable way — remember she first pursued me. I am just trying to reconnect.’

The communications seem to have dried up for a few months, but by December the man seemed to be getting more concrete about his plans to meet with Giada.

‘I could meet her most easily in Las Vegas but would travel to LA as well,’ he wrote in an email to the PI.

‘I know there are plenty of people who don’t speak with each other after having a child together — we have been kept apart by people and places for a long time — I just know that there are some things that we should talk about and I think she feels the same way.’ 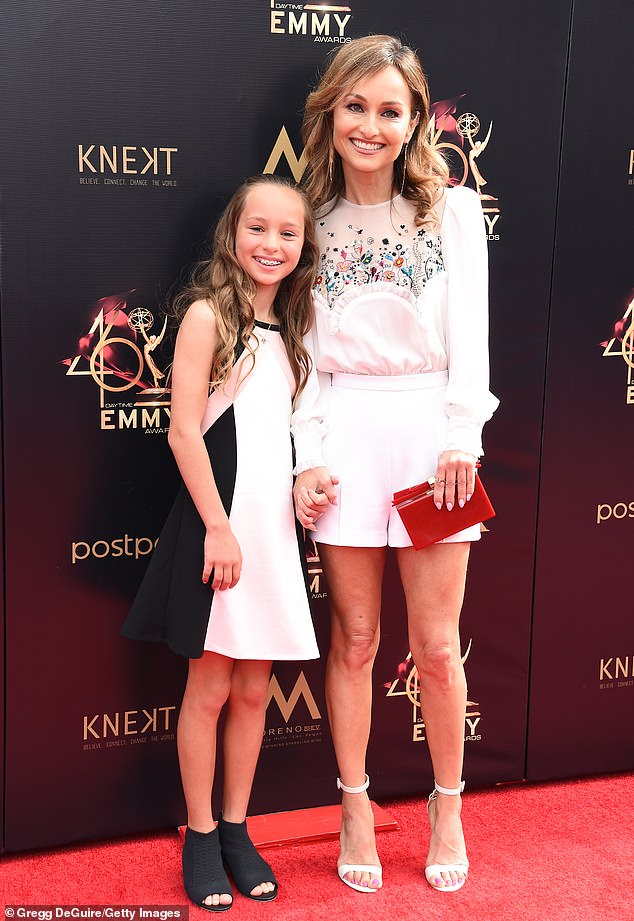 Won’t take a ‘no’: The stalker continued to message Giada and her investigator, asking to meet in Las Vegas, or offering to travel to LA to see her

The chef claimed the last time the man messaged her investigator was February 22.

‘It would mean a lot to me to see her again and I think she feels the same way,’ he wrote at the time. ‘So if you want to make G happy — let us see each other and talk.’

In court filings, Giada summed up her case for the judge: ‘Given the fact Respondent continued to send messages through my website, claims to be the father of my child, showed up to confront me while working in a public place demanding to speak with me alone, it became apparent that he was stalking me.’

In December of 2014, she announced they had separated the previous July and would be seeking a divorce, which was finalized in September 2015.