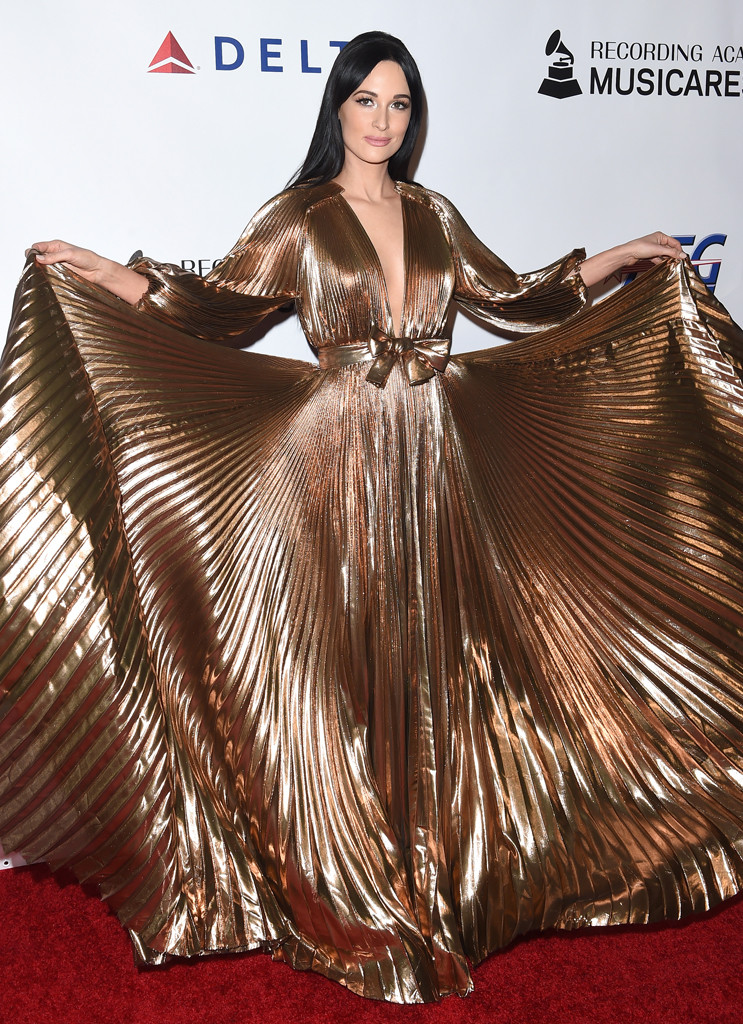 If any style icon deserves to sit atop their high horse, Kacey Musgraves is the one.

The country music star is one of the famed artists performing at the 2019 Coachella and not only are fans excited to see her perform, but there is some serious buzz surrounding her concert wardrobe. In the past, the “Velvet Elvis” singer has taken to the stage in glamorous rainbow-colored pants, fur coats and glittering onesies. However, the sun’s rays and unforgiving heat likely won’t mesh well with the pantsuits the 30-year-old is famous for wearing.

So, what do people predict she will be wearing? Well, E! News took a look back at the dozens of breathtaking outfits the artist has sported over the years and there’s one thing that’s for sure: it will be a stunner.

No doubt the showstopping ensemble will be added to the hall of fame of Kacey’s best looks.

To find out which of Kacey’s outfits have already reached icon status, check out the gallery below!

Kacey oozed confidence and power in this Brandon Maxwell suit and skirt at the Billboard Women in Music awards.

The woman of the hour dons a Versace drape dress for the highly exclusive Vanity Fair after party.

At first glance, you would think the Golden Hour singer had this tulle Valentino gown custom made in honor of the album cover, but it turns out it wasn’t.

At the 2019 Grammys Kacey took home the gold for both Best Country Album and Album of the Year, plus she totally won for the best look of the night in this short red silk Valentino gown.

Kacey proves that all that glitters is gold in this goddess-like dress designed by J Mendel.

Versace came through with this stunning gown and an even more stunning slit for Kacey to show off her lean legs.

Kacey had the ultimate diva moment in a Rachel Comey suit with fluffy cuffs.

It will be pretty hard for the country singer to top this Giambattista Valli Haute Couture look.

While most people wear a dazzling gown on the red carpet, Kacey went for a glamorous power suit with gold detailing.

Kacey pays homage to her love for ’70s fashion by wearing a glam coat and pointed heels for a C2C event in England.

During their tour together, the singer matched the One Direction singer’s funky vibe in a glittering romper.

Christian Siriano is to thank for creating what Kacey calls a “cotton candy dream of a dress.”

The singer dons her finest Armani gown for a night among the stars.

Never afraid to go for a bold look, the country star performs in a glittering multi-colored jumpsuit that had everyone applauding her style choices.

Kacey took home her first two Grammys in 2014 for her song “Merry Go ‘Round.”

For her first-ever Grammy Awards, the country girl ditches the cowboy boots for a shimmering pink gown designed by Armani.

Her country roots are truly reflected in this cowgirl inspired ensemble.

These boots are made for walking and Kacey does that and more on the stage of the 49th Annual CMA Awards.

Kacey shows off her country roots in the red and white dress, with a bejeweled belt.

We weren’t “Blowin’ Smoke” when we said Kacey is a total style icon.