Justin Theroux has battled with a neighbor in his West Village apartment building for years with new domestic violence accusations reaching quite the boiling point.

The 47-year-old ex-husband of actress Jennifer Aniston was seen riding his bicycle in the city on Monday as a Page Six report detailed his years-long legal tangle over building renovations with a neighbor, where the bold allegations stem from. 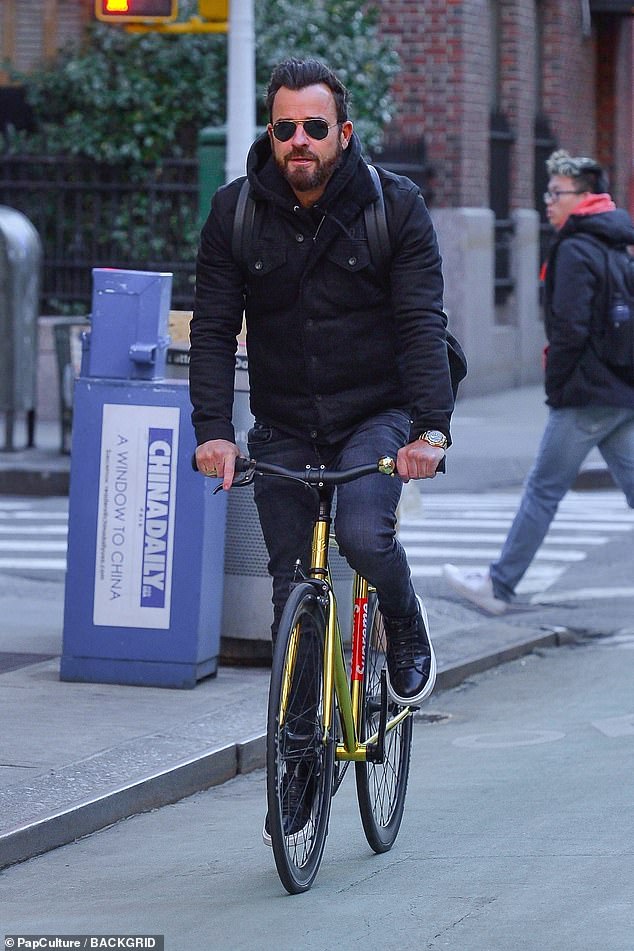 The latest: Justin Theroux, 47, was seen riding his bicycle in the city on Monday amid reports he’s accusing a neighbor in New York City’s West Village of beating his wife

The Leftovers star said in documents submitted to a Manhattan civil court that he’s seen and heard alarming things coming from his downstairs neighbors – an attorney named Norman Resnicow and his wife Barbara – that point to domestic violence.

‘Because my apartment is directly above the Resnicows’ apartment, I have had the misfortune over the years of personally overhearing Mr. Resnicow frequently scream at and berate Mrs. Resnicow, with some of those instances resulting in calls to 911,’ The Girl on the Train actor said.

‘Although I cannot know for certain that Mrs. Resnicow’s injury stems from the Sunday night altercation 2½ days earlier,’ Theroux said, ‘I am bringing this to the Court’s attention because, by all outward appearances, earlier attempts to go through the police have not been effective.’ 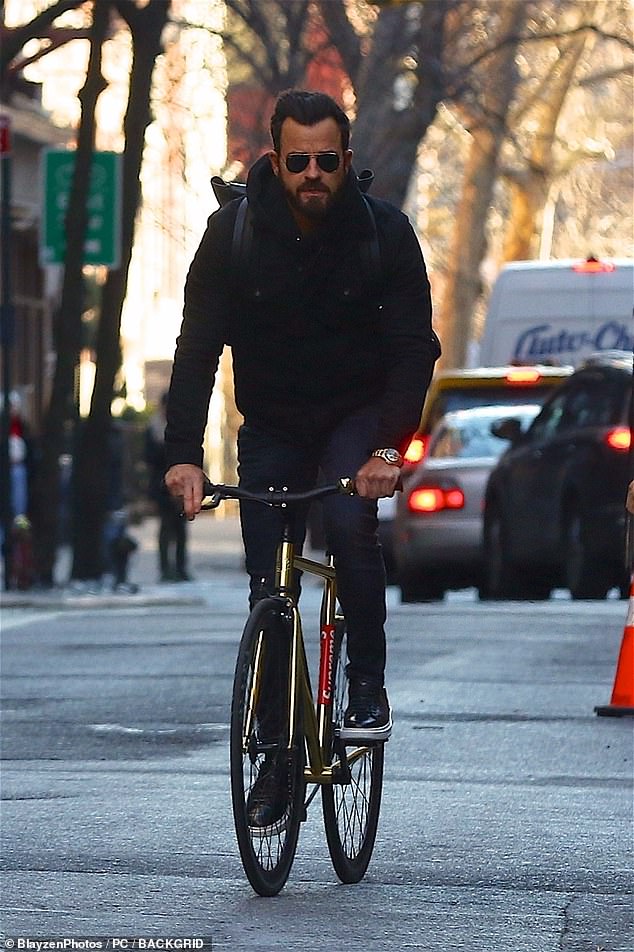 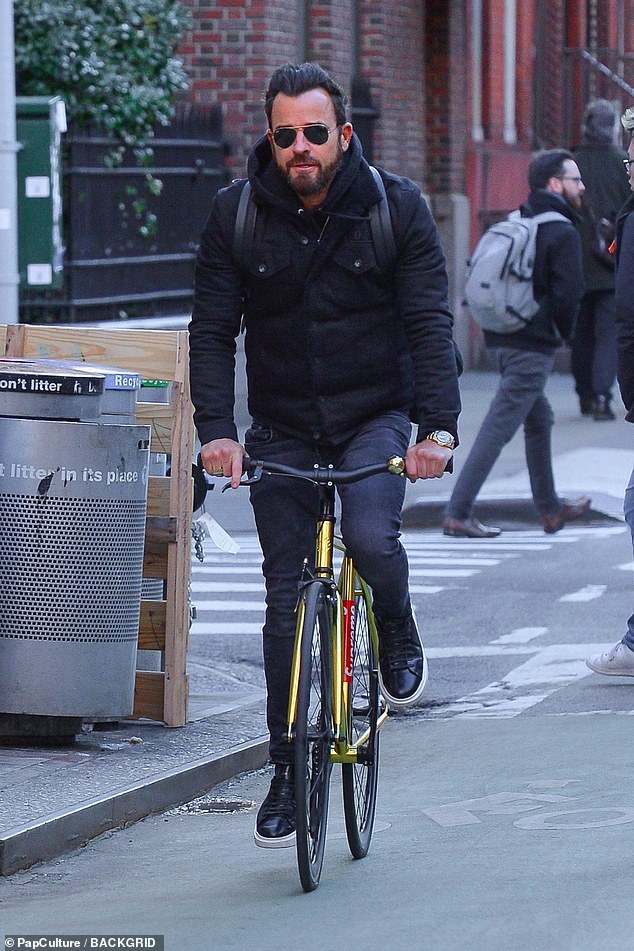 Midas touch: The American Psycho actor’s bike and watch were both golden in color

Both of the Resnicows deny Theroux’s accusations in their court statements with Barbara claiming she tripped and fell on a sidewalk.

‘This resulted in a bruise below my left eye,’ she said – two days before Theroux initially contacted police, in addition to text messages communicating the news to her husband.

‘On the preceding Friday, Feb. 8, while returning to my office from the gym at lunchtime, I tripped and hit the side of my face on the sidewalk while admiring a cute toddler,’ she said in court docs.

Barbara has ‘never feared for [her] safety while alone with Norman’ and believes the domestic violence allegations are ‘Theroux’s attempt to gain an advantage’ in the renovation rift.

Norman said that he often has to raise his voice so his wife can hear him, as she has hearing problems. 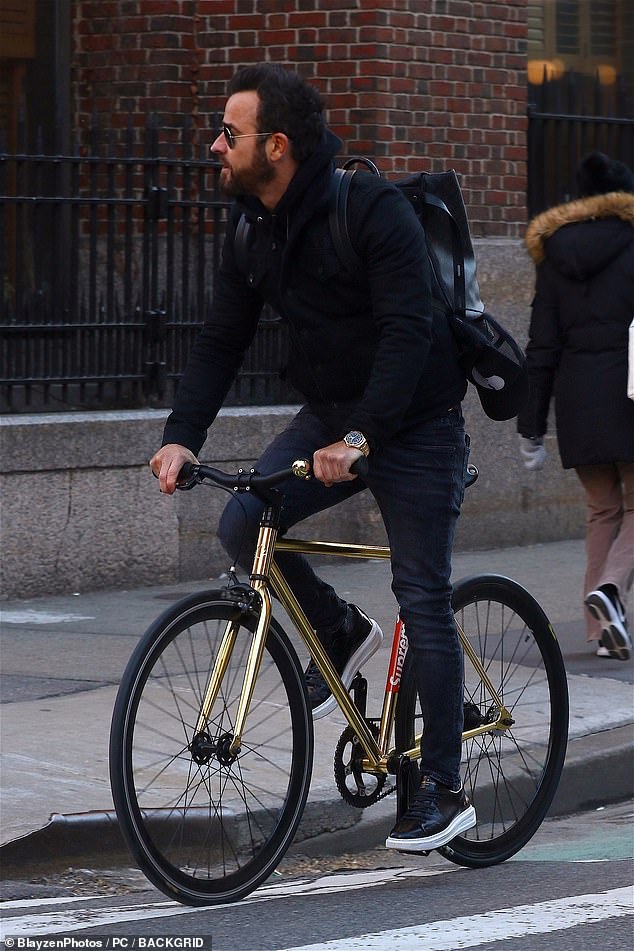 Focused: The actor seemed attentive as he turned a corner in the busy street 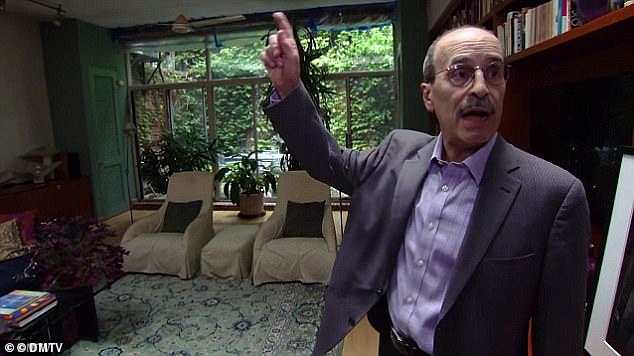 No love lost: Norman Resnicow told DailyMailTV last year that he and Theroux were friendly at one time, until the actor ceased to care ‘about the people who live downstairs’

Theroux, who appeared in last year’s Ruth Bader Ginsburg biopic On the Basis of Sex, has been in litigation with Resnicow for years, filing a harassment suit in 2017 about renovations he was making to his home, according to the paper. Theroux has past accused Resnicow of trespassing and spying on him.

Resnicow told DailyMailTV last year that he and Theroux were friendly at one time, until the actor ceased to care ‘about the people who live downstairs.’

Theroux split with Jennifer Aniston a year ago after more than two years of marriage.