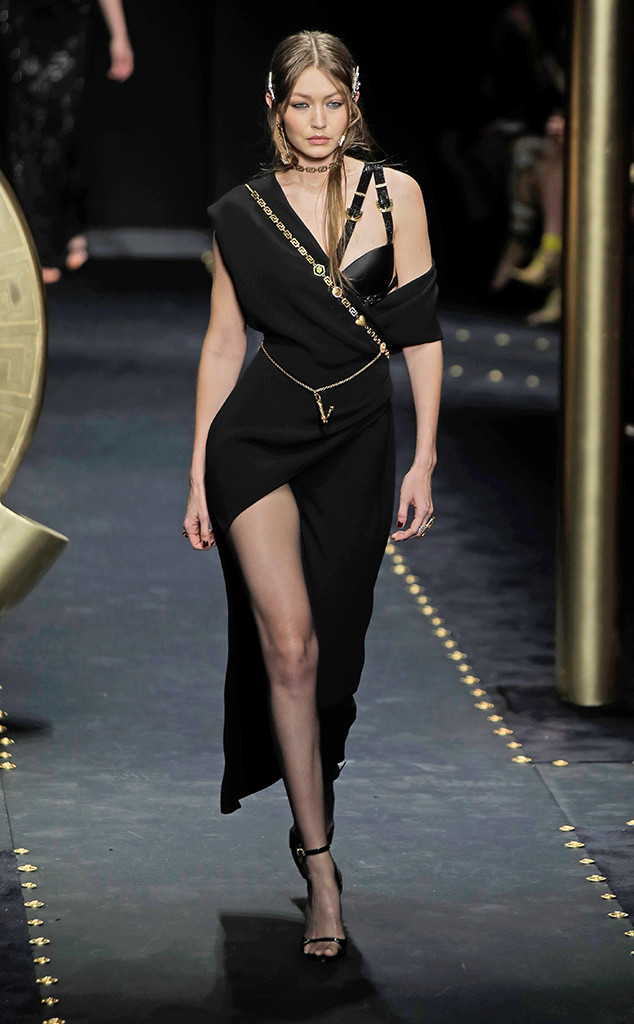 Milan Fashion Week is heating up!

Kendall Jenner, Gigi Hadid and Bella Hadid all made their way down the catwalk at the Fall 2019 Versace fashion show during Milan Fashion Week on Friday.

The supermodels also showed off all their backstage fun on Instagram. They were seen hanging together sporting matching jackets with their names adorned on the back as they prepared to walk the catwalk.

But, they were not the only celebrities bringing the star power to the iconic brand’s fashion show.

Liam Payne, who is rumored to be romancing Naomi Campbell, made a solo appearance at the show. Idris Elba was accompanied by his fiancé, Sabrina Dhowre.

See all the celebs who attended the star-studded fashion show below.

The model had all eyes on her as she made her way down the runway in an orange and gray coat with coordinating boots.

The Keeping Up with the Kardashians star rocked a black ensemble with lace detailing to walk the runway.

The model looked gorgeous in a long-shimmering gown at the show.

The Russian model rocked an all black floor-length gown for the fashion show.

The fashion icon made a statement in leather and lace for her turn down the catwalk.

The model sizzled in a black dress as she walked down the runway at the Versace show.

The daughter of Cindy Crawford and Rande Gerber was runway ready in a black skirt and matching jacket. She finished off the look with pink turtleneck sweater and matching boots.

The actress and model looked radiant in her orange form-fitting dress.

The Avengers: Infinity War actor arrived in style to the show with his fiancé.

The former One Direction star kept in simple in all black.

The singer and actor struck a pose at the Versace show.

The stars took in the Versace fashion show from the front row.

The models showed off their matching jackets backstage at the show.