By David Lawrance For Dailymail.com and Eve Buckland For Mailonline and Associated Press

Kevin Spacey has delivered another holiday message to his fans.

In the bizarre one minute long video, posted to the controversial actor’s YouTube account on Tuesday, Spacey once again seemingly adopts the Southern accent of his former House of Cards character, the villainous Frank Underwood.

‘You didn’t really think I was gonna miss the opportunity to wish you a Merry Christmas did you?’ began the 60-year-old, addressing the camera while sitting by a fireplace. 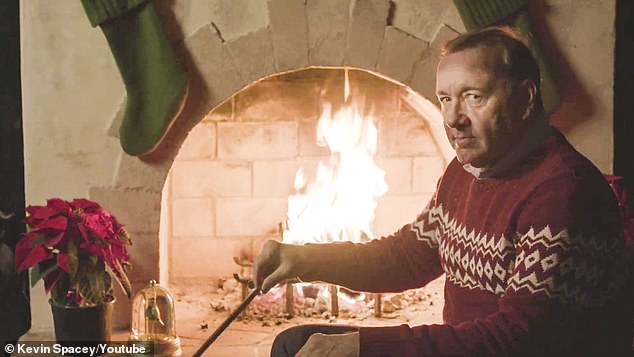 Another one: Kevin Spacey has delivered another holiday message to his fans in a video posted to his YouTube account on Christmas Eve

‘It’s been a pretty good year, and I’m grateful to have my health back,’ continued the Academy Award winning actor.

‘In light of that, I’ve made some changes in my life and I’d like to invite you to join me.’

‘As we walk into 2020, I want to cast my vote for more good in this world. Ah yes, I know what you’re thinking. Can he be serious? I’m dead serious. And it’s not that hard. Trust me.’

‘The next time someone does something you don’t like, you can go on the attack. But you can also hold your fire, and do the unexpected. You can…kill them with kindness,’ he finishes, before an ominous musical sting plays to close out the video. 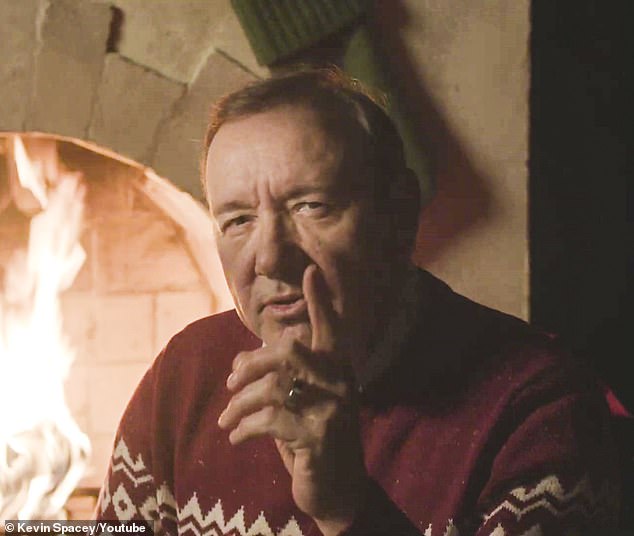 The video comes a year to the day after the American Beauty star released his now-infamous ‘Let Me Be Frank’ holiday message.

The 3-minute video opened on a defiant Spacey washing his hands in the kitchen while wearing a Santa Claus-themed apron.

Just as he had done in the show while playing the ruthless and conniving President Underwood, Spacey stared head-on into the camera and directly addressed the viewers.

‘I know what you want,’ Spacey-as-Underwood uttered with his character’s unmistakable cadence and southern accent. ‘Oh, sure, they may have tried to separate us, but what we have is too strong, is too powerful.’ 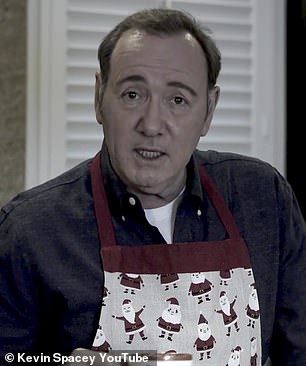 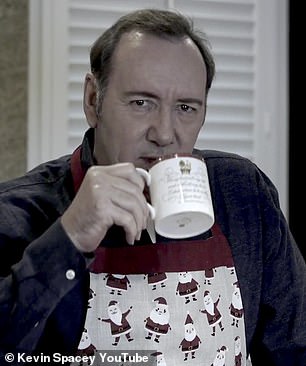 His last effort: The video comes a year to the day after the American Beauty star released his now-infamous ‘Let Me Be Frank’ holiday message

Spacey acknowledged the charges that had been made against him and suggested he would overcome them and revive his career.

‘We’re not done, no matter what anyone says,’ he said. ‘Some believed everything and they’ve just been waiting with bated breath for him to confess it all. They’re just dying to have me declare that everything said is true and that I got what I deserved. Wouldn’t it be easy if it was all so simple?

‘Only you and I both know it’s never that simple. Not in politics and not in life, but you wouldn’t believe the worst without evidence, would you? You wouldn’t rush to judgement without facts, would you?’

Spacey then closed out the video by stating: ‘I feel surprisingly good and my confidence grows each day that soon enough you will know the full truth.

‘Wait a minute, now that I think of it, you never actually saw me die, did you? Conclusions can be so deceiving. Miss me?’

Under fire: A slew of sexual assault accusations against Spacey led to his firing from House of Cards and his removal from the completed movie All the Money in the World, which was reshot with actor Christopher Plummer. Spacey seen here in Rome back in August 2019

A slew of sexual assault accusations against Spacey led to his firing from House of Cards and his removal from the completed movie All the Money in the World, which was reshot with actor Christopher Plummer.

One accuser passed away in October, leading to Los Angeles prosecutors rejecting a sexual battery case against the actor.

The case stemmed from a masseur’s allegations that Spacey inappropriately touched him during a massage session at a home in Malibu, California, in October 2016.

The decision stated that the allegations against Spacey could not be proven without the masseur’s participation.

The groping allegation was first brought in 2017, days after Spacey’s first accuser, actor Anthony Rapp, said Spacey climbed on top of him on a bed when Rapp was 14 and Spacey 26.

Spacey said he did not remember such an encounter with Rapp but apologised if the allegations were true.

Spacey also used the statement to disclose he is gay. 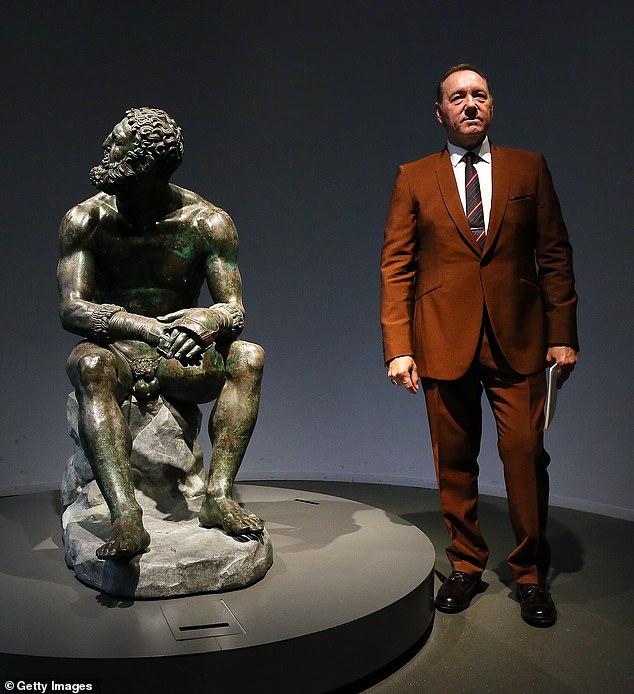 Accusations: One accuser passed away in October, leading to Los Angeles prosecutors rejecting a sexual battery case against the actor

Meanwhile, on July 17, prosecutors announced they were dropping an indecent assault and battery charge brought against the star last year.

Spacey was accused of groping an 18-year-old man at a bar on the resort island of Nantucket in 2016.

William Little, 18, accused Spacey of reaching his hand down his pants at The Club Car, a claim he said could be corroborated by text messages he exchanged with an group of friends and his then-girlfriend.

Little, who worked at the establishment where the alleged incident took place, told Spacey he was 23 at the time.

It was revealed however the texts on the accuser’s phone had been deleted by his mother prior to handing it over to authorities – and the phone had been lost at some point in the past year.

The case unraveled after the accuser invoked his Fifth Amendment right not to testify about text messages from the night of the alleged groping that the defence claimed were deleted. 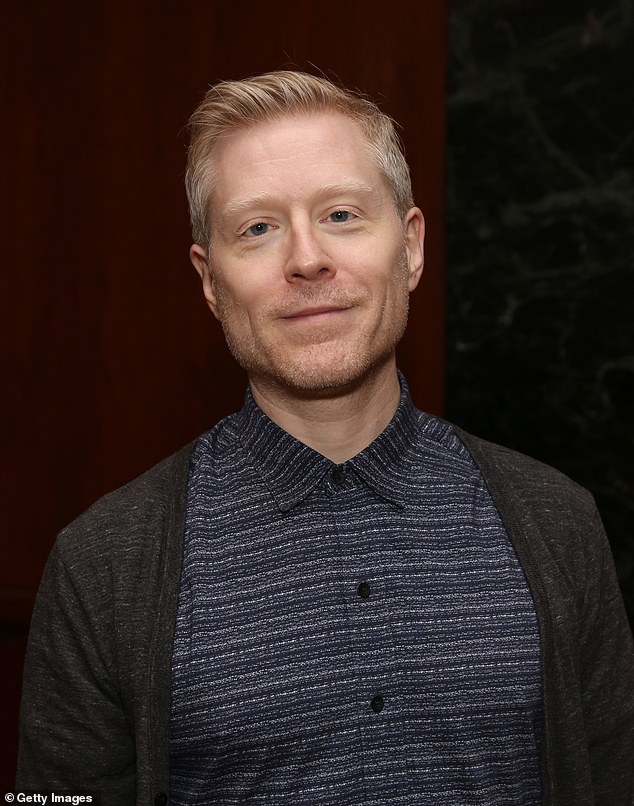 Accuser: The groping allegation was first brought in 2017, days after Spacey’s first accuser, actor Anthony Rapp [pictured January 2019], said Spacey climbed on top of him on a bed when Rapp was 14 and Spacey 26