By Heidi Parker and Ciara Farmer For Mailonline

Kim Kardashian and Kanye West have welcomed their fourth child via surrogate.

‘He’s here and he’s perfect,’ the beauty tweeted. Minutes later she added, ‘He’s also Chicago’s twin lol I’m sure he will change a lot but now he looks just like her.’

The baby was born on Thursday evening and weighed in at 6 lbs, 9 ozs, according to TMZ.

This comes after Kim’s sister Kourtney, 40, surprised their mother Kris, 63, with the news that the surrogate was in labor with the child during an appearance on The Ellen Show on Thursday, much to the delight of the family matriarch. 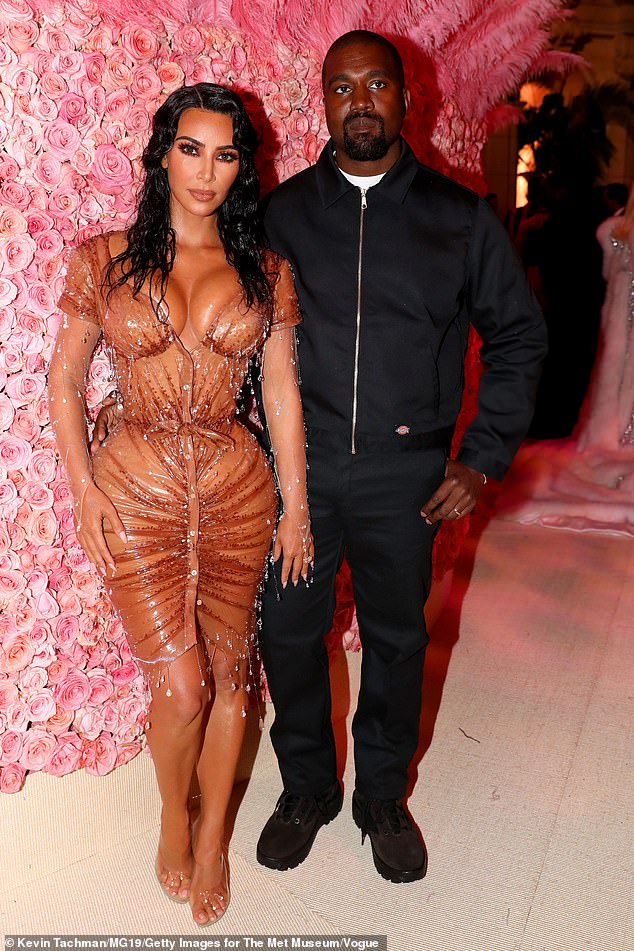 Great news! Kim Kardashian and Kanye West have welcomed their fourth child via surrogate on Friday; here they are seen at the Met Gala on Monday in NYC

Keep up with Kim in a dress by Thierry Mugler

Kim Kardashian looked nothing short of perfection as she walked the red carpet at this year’s Met Gala.

Flaunting her incredible figure in a custom made dress by Mugler, the nude latex number features a belted waist, ruched front and button down design. Not forgetting those teardrop jewels, which create a dripping, waterfall effect to match her wet-look hair.

The dress was made just for Kim, and it was Thierry Mugler’s first design in twenty years. Of course that means it can’t be bought but if a similar mini is what’s missing from your wardrobe, then the edit below is for you.

We’ve handpicked lookalikes ranging from Nasty Gal to Dolce & Gabbana that will do just the trick! 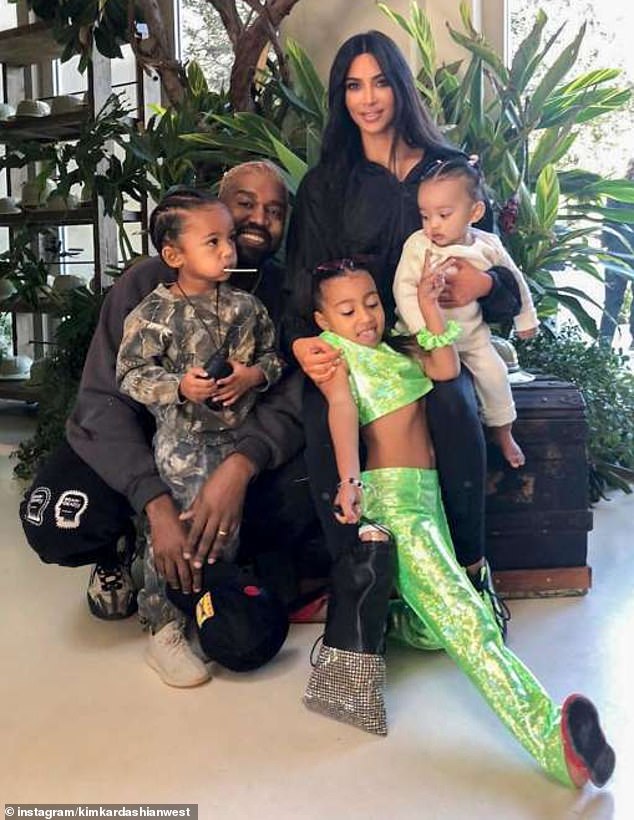 She was brief and to the point: The siren, 38, said on Friday morning, ‘He’s here and he’s perfect!’

More on #4: Minutes later she added, ‘He’s also Chicago’s twin lol I’m sure he will change a lot but now he looks just like her’

Back in January, Kim confirmed that they were expecting their fourth child during an appearance on Watch What Happens Live.

Though she also confessed to spilling the beans when she had too much to drink at their star-studded Christmas Eve party.

She told Andy Cohen: ‘I got drunk at our Christmas Eve party and told some people. I can’t remember who I told because I never get drunk.’ 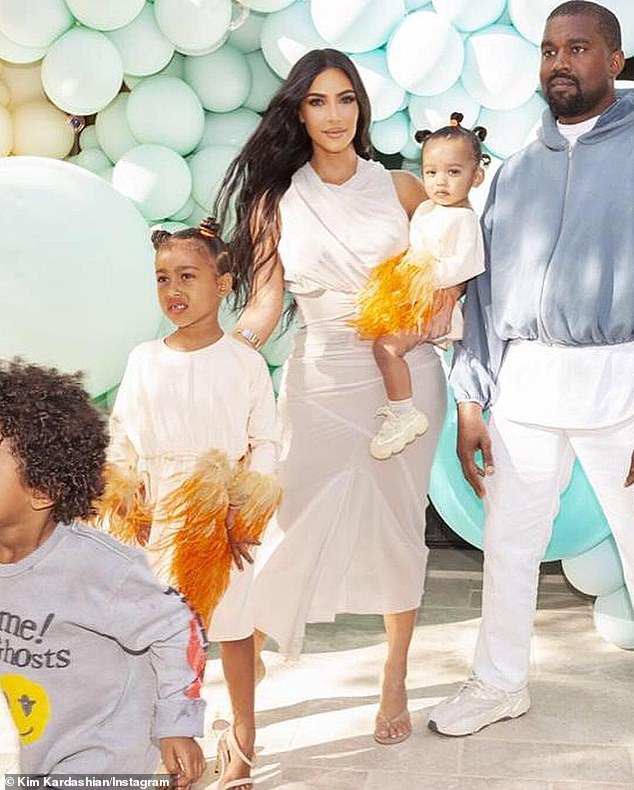 Birthday time: Here Kim and Kanye are seen with their first three children as Khloe’s daughter True turned aged one

She battled with life-threatening condition placenta accreta during her two pregnancies and has been warned by her doctor to not carry her own baby again.

The condition occurs when all or part of the placenta remains attached to the uterine wall after childbirth.

During a November 2016 episode of Keeping Up With The Kardashians, Kim explored the possibility of carrying her third child. 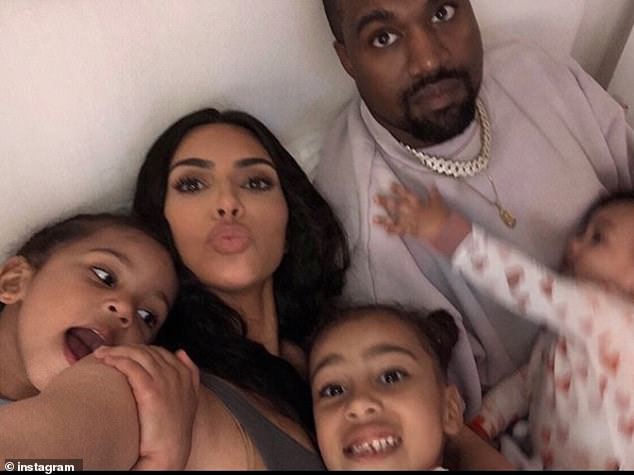 Family shot: The power couple cuddled up as they posed with their three kids at home in Hidden Hills, California

Yet she was left bereft when doctors told her that there are too many risks if she gets pregnant and that it would be life-threatening.

Kim said on the show: ‘If the two doctors that I trust have told me it wouldn’t be safe for me to get pregnant again, I have to listen to that.’

Speaking in April, Kim made it clear that she wanted to have another child. She said on the reality show: ‘I’d love nothing more than to expand my family and just know that I have this world at home that’s safe.

‘And if for some reason I left this earth sooner than I really wanted to, then my kids would have a support system at home — so that I know that they would be okay if I wasn’t here.’ 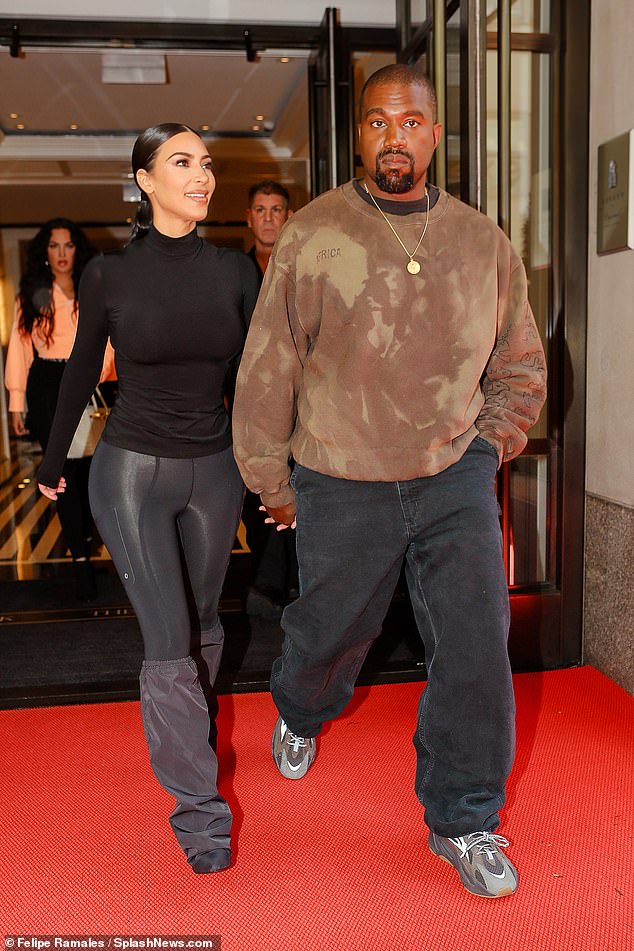 Day after: On Tuesday they were hand in hand as they left their hotel in NYC

She later explained: ‘I can’t carry anymore kids… it’s the worst. I give up.’ Discussing the prospect of surrogacy, she added: ‘Kanye was really nervous about the surgery… but I know he would want to have more kids.

‘I feel like surrogacy is the only option for me. Kanye and I are going to look into other options and see what we are comfortable with … but I’m definitely leaning towards [surrogacy].

‘I always knew surrogacy was an option – now it’s my reality. Whatever is meant to be will be.’

The reality starlet, previously revealed that her sisters Khloe and Kourtney and her best friend Chrissy Teigen had offered to be her surrogate in the past following her health concerns.

As well as being a risk to her health, Kim has admitted that she found pregnancy ‘the worst experience of her life!’

Writing on her website, she explained: ‘I’m gonna keep it real: For me, pregnancy is the worst experience of my life!’

FIRST LOOK AT THEIR  BABIES

Kim has had a habit of waiting a while before sharing a first photo of her newborn children. So don’t expect a photo of her fourth child right away.

Here is a roundup of the first time the TV star and her rapper husband shared photos of North, Saint and Chicago. 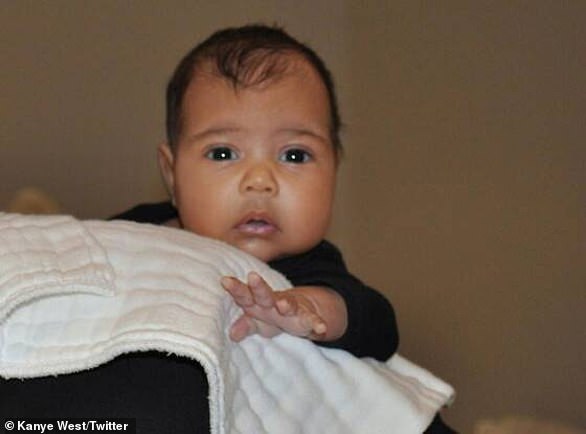 When she welcomed North in 2013, Kim waited months before presenting the world with a first look

When she welcomed North in 2013, Kim waited months before presenting the world with a first look.

And it was Kanye who did the honors.

North was already two months old when the musician shared a first image of North while on Kris Jenner’s now-defunct talk show in late August 2013.

Little Nori was in a black top while on a shoulder in the photo which was just flashed on the screen for a short moment.

‘When my daughter was first born, people ask me how do you feel is everything different?’ he told Kris.

‘No, not yet. It takes time to understand and you met a brand new person…and the thing I think about as a dad is just protection.’ 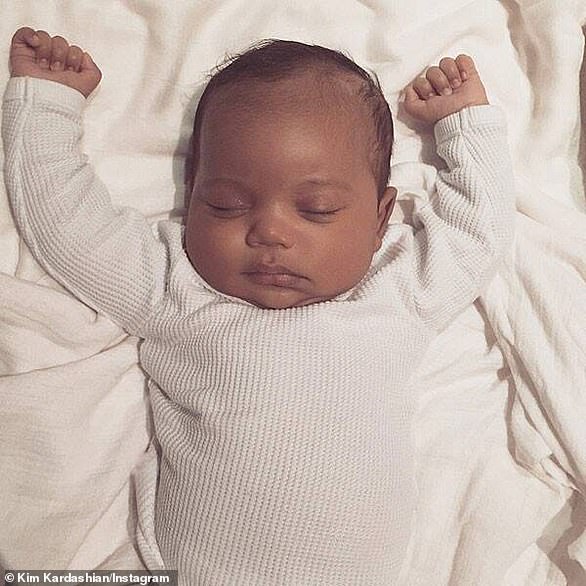 When Kim and Kanye welcomed Saint in December 2015, they waited too. The Keeping Up With The Kardashians star shared a photo of her first son on February 22

When Kim and Kanye welcomed Saint in December 2015, they waited too.

The Keeping Up With The Kardashians star shared a photo of her first son on February 22, 2016.

His eyes were closed while laying back down on a bed in his off-white onesie.

‘Today is my dad’s birthday,’ began the Selfish author.

‘I know there’s nothing more in the world he would have wanted than to meet his grandchildren. So I wanted to share this pic of Saint with you all.’

Her father Robert Kardashian died in 2003 of cancer. 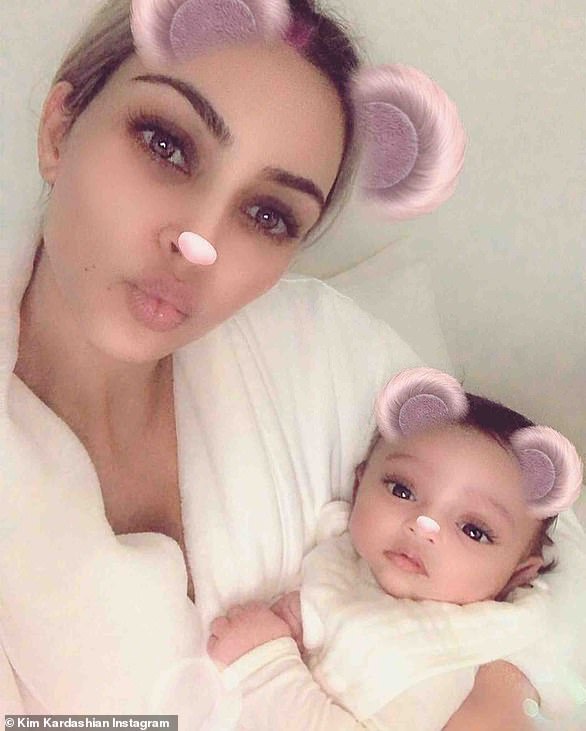 Chicago was born on January 15, but the first photo of the little darling was not shared until February 26

Chicago was born on January 15, but the first photo of her was not shared until February 26.

Kim was holding her little mini me baby in her arms while in a white bathrobe and her hair pulled back for a social media post.

Both had little pink ear and nose filters.

Right away fans noticed that Chi had her mother’s long eyelashes.