Kim Kardashian, Khloe Kardashian and Kourtney Kardashian have traded in primetime for late night—just for tonight.

The three sisters appeared on Monday night’s episode of Jimmy Kimmel Live! one day after their show Keeping Up With the Kardashians aired its season 16 premiere. The E! show’s first episode of the season featured some pretty big occasions, such as Kim sharing an ultrasound picture of baby no. 4 with her sister Kylie Jenneras well as Scott Disick going on a high tea date with MJ and so, so much more.

Jimmy Kimmel is filming his show in his hometown of Las Vegas for the week, which he called “a dream come true for us.” The late night host began his show by poking a bit of fun at Nicolas Cage‘s recent 4-day-long marriage to girlfriend Erika Koike as well as other April Fools’ Day jokes.

Kimmel first complimented the sisters by saying they “look like the Avengers coming out.” The three of them argued about who had the best playlists while taking road trips to Palm Springs or vacations to Vegas with their late father, Robert Kardashian.

The host asked Kim about her upcoming baby and how she goes about picking baby names.

Kimmel asked if Kim’s husband Kanye West comes up with the names on his own, but Kim said they “all weigh in.”

“I definitely take a family survey. But it’s usually after the baby’s born or we’re trying to figure out what the baby looks like,” she said. “I usually go about three or four days nameless until I feel that it really connects.”

It turns out that Kourtney did something similar.

“I did a week the last time,” she chimed in. Kourtney told a short story about her son, Reign Disickand how she disagreed on her son’s name with Scott Disick.

She concluded, “So I was like fine, let’s call him Preston for a day. And it didn’t work out.” Clearly not!

Kim revealed that she has recently been doing research on Armenian names, but there was one in particular that really stuck out. “I was truthfully thinking about just naming him Rob. My brother,” Kim said. “But then it’s kind of like North, Saint, Chicago, Rob. But I really was feeling that.”

She asserted that her brother Rob Kardashian “approved.”

During the show, one lucky fan named Jose even had the chance to take a selfie with the famous sisters. What a lucky day!

Kourtney has a big birthday coming up and the three of them shared with the late night host a few rules for the birthday bashes: “no speeches, Mom is not allowed to cry and no balloons.” Also, don’t even think about getting Kourtney printed napkins because she “thinks it’s cheesy.”

It has been both an exciting and emotional time in the KarJenner family. E! News confirmed in January that the KKW Beauty owner and her husband are expecting their fourth child together—the second one born via surrogate. The two of them are parents to North West, 5, Saint West, 3, andChicago West, 1 and they will soon welcome a baby boy sometime soon, likely in May. Imagine if it had the same birthday as Meghan Markle and Prince Harry‘s future royal baby!

Kim confirmed the baby news herself a few days later on an episode of Watch What Happens Live with Andy Cohen. Andy Cohen asked if he was “working on another child” and she replied, “We are.” The 38-year-old later admitted that alcohol played a bit of a role in her telling people about it. “I got drunk at our Christmas Eve party and I told some people. I can’t remember who I told because I never get drunk,” she told Cohen.

A source told E! News that Kim and the Yeezy designer are “thrilled” about the new addition to their family. “Kim always wanted four kids and having two boys and two girls feels perfect. They were very happy with the entire experience the first time and are so grateful to have one more baby,” the source said.

Kim shared a sweet family photo of the five of them on Saturday and provided a bit of a glimpse into how the famous family spends their mornings. 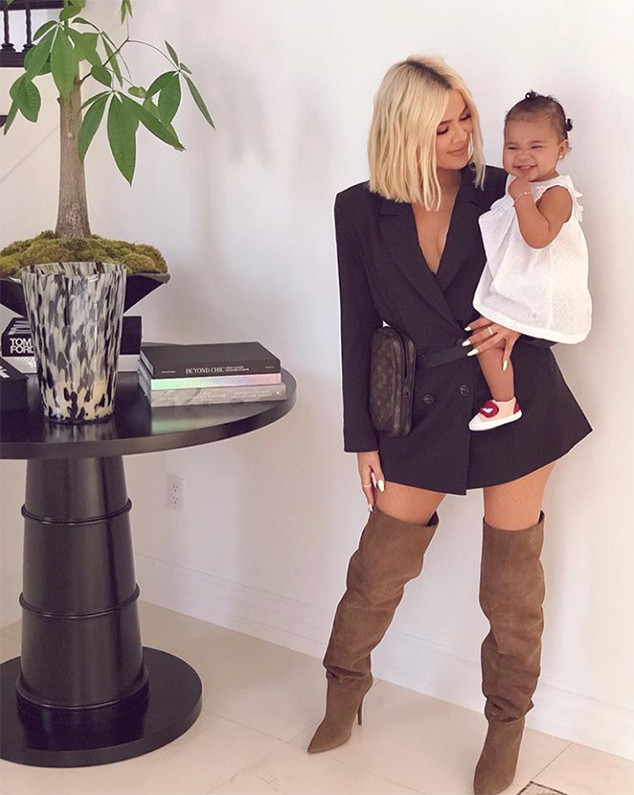 Meanwhile, Khloe and the family have been dealing with their  fair share of personal heartache and Kimmel briefly brought it up on the show tonight.

“Is it time to stop dating basketball players?” Kimmel asked.

The crowd erupted in cheers and she replied, “I like what I like. What can I say?”

Khloe’s ex-boyfriend—and father of their 11-month old daughter True Thompson—Tristan Thompson was embroiled in an alleged cheating scandal that occurred in February. E! News confirmed on Feb. 19 that they officially split up. Thompson supposedly cheated on Khloe with Kylie’s best friend, Jordyn Woods.

Woods spoke out about the incident on Jada Pinkett Smith’s Red Table Talk but the Good American founder accused the 21-year-old of lying.

“Tristan is equally to blame but Tristan is the father of my child. Regardless of what he does to me I won’t do that to my daughter. He has been addressing this situation PRIVATELY,” Khloe tweeted on March 1. “If Tristan were to lie publicly about what conspired,then yes I would address him publicly as well.”

Khloe will address the rumors later on in the KUWTK season. A teaser for the season showed Khloe saying tearfully, “It just sucks it has to be so public. I’m not just a TV show. Like, this is my life.”

For her part, though, Khloe has emerged from the breakup stronger and with some important life outlooks. She tweeted on March 2, “I have to move on with my life & count my blessings, my family, my health, & my beautiful baby True.”

Other topics that the family and Kimmel discussed on Monday included their popular Sunday Service (which are coming to Coachella) as well as Kanye’s announcement that he wanted to move back to Chicago.

“We have so many friends that maybe feel a little too judgmental when they go to church or something like that. When they come here they feel so free and safe,” Kim said of the services. “It’s a beautiful way to start your week.”

Be sure to catch Kim Kardashian West, Khloe Kardashian, and Kourtney Kardashian of Keeping Up With the Kardashians on Jimmy Kimmel Live! TONIGHT, at 11:35 PM ET/PT on ABC!

Check out our new Keeping Up With the Kardashians channel on YouTube for show clips, recap videos and more.

Watch a new episode of Keeping Up With the Kardashians Sunday at 9 p.m., only on E!