He was freed last year after being incarcerated for increasingly convoluted firearms charges.

But Meek Mill was prevented from entering a concert Saturday at Las Vegas‘ Cosmopolitan Hotel and Casino by security guards who threatened to have him arrested if he entered the premises, according to TMZ.

The 32-year-old rapper was apparently attempting to see a DJ Mustard show, but the venues security made it clear that someone higher up didn’t want him anywhere near the show. 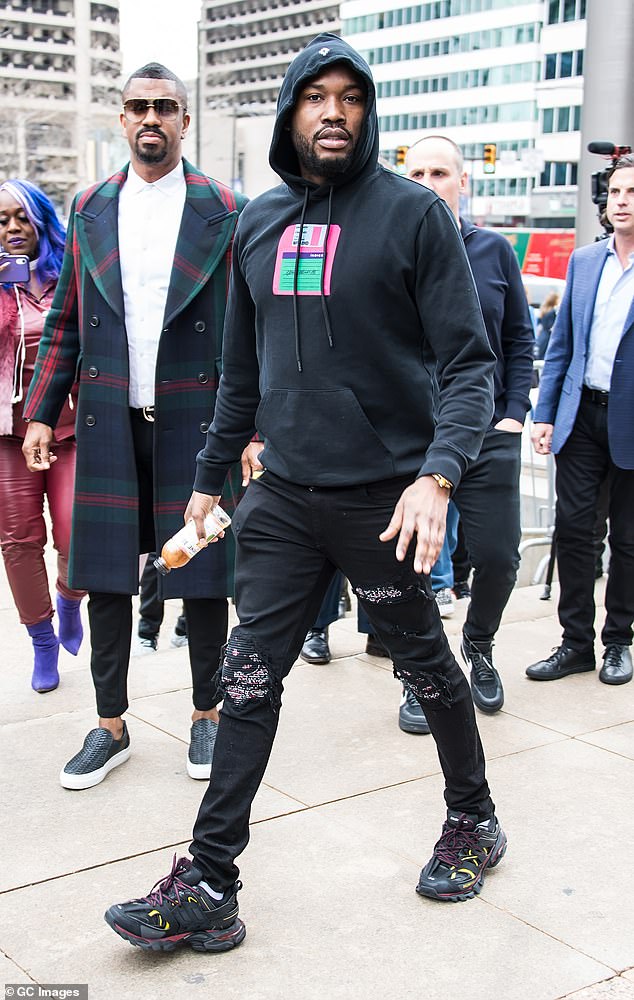 Turned away: Rapper Meek Mill, 32, was stopped from entering a concert Saturday at Vegas’ Cosmopolitan Hotel and Casino by security guards who threatened to have him arrested; pictured April 2

In a video shared by TMZ and to the rapper’s own Twitter, he can be seen speaking through the window of his vehicle with casino security members.

The first part of the conversation is cut-off by the security guard seems to be alleging that Meek was involved in some kind of physical altercation during a previous visit to the casino, something he claims is ‘impossible.’

The Ima Boss rapper (real name: Robert Rihmeek Williams) claimed he’d visited the casino once before when he accompanied fellow rapper and former girlfriend Nicki Minaj to a Jay-Z show.

When he and his own security pressed the employee for details about the alleged altercation, he punted, claiming he didn’t know the details and that they’d need to contact the casino’s vice-president.

‘This comes from way higher up than me,’ one guard allegedly said, according to Meek’s lawyer Joe Tacopina. 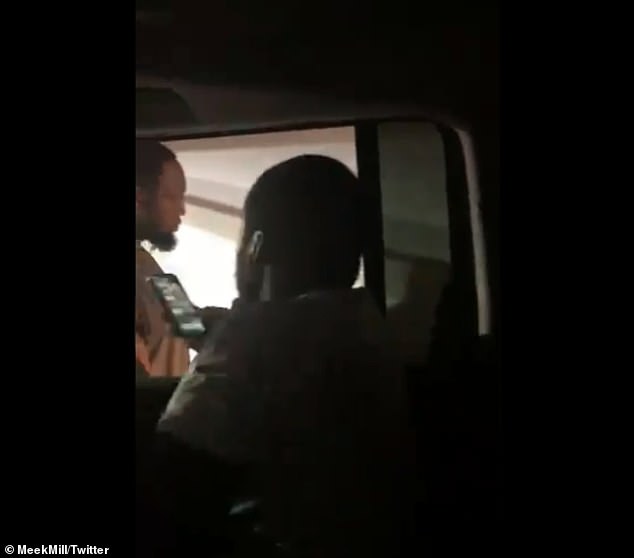 Altercation: In videos shared by TMZ and to the rapper’s own Twitter, he can be seen speaking through the window of his vehicle with casino security members 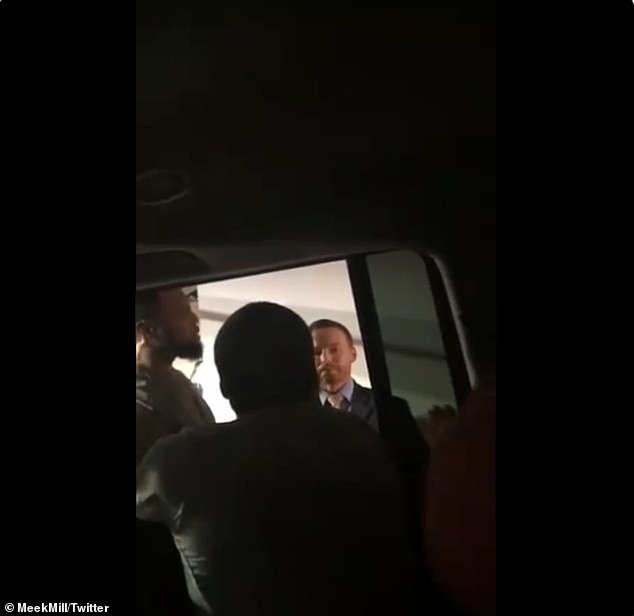 Accusations: The security guard claimed that Meek was involved in some kind of previous altercation at the casino, though Meek later denied that, saying he’d only visited the casino once with Nicki Minaj for a Jay-Z show 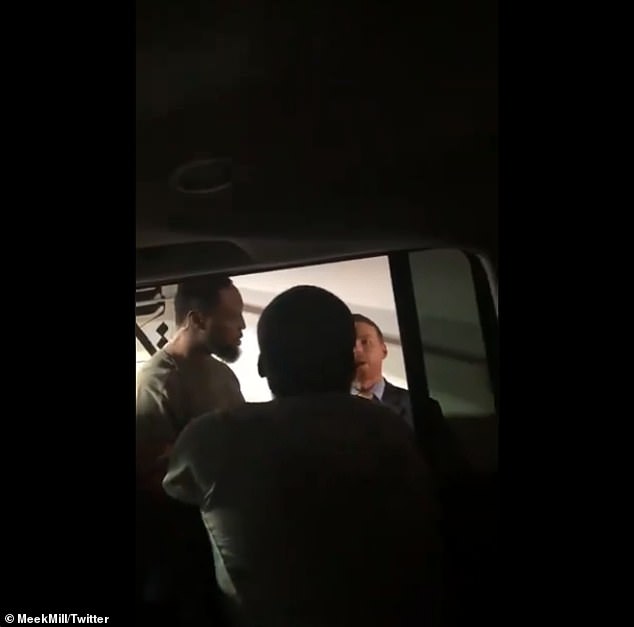 Passing the buck: The guard told the rapper and his entourage that they were trespassing and that they’d need to contact the organization’s vice-president for more information

The rapper took to social media to accuse the casino of racially profiling him.

‘If you come from our culture you should never step foot in the cosmopolitan hotel they just really racist as hell,’ he wrote. ‘Something really has to be done in Las Vegas what they doing to black people!’

‘They telling black rappers they are banned from properties they own without incident … they just told me I was trespassing and I will be arrested I stepped in that hotel once at a jayz party without incident!’ he added in a subsequent tweet.

He followed up his outraged posts with a legal threat.

‘I needs lawyers ASAP y’all not gone treat me like I’m just a rapper and expect me to be quiet.’

Not holding back: The rapper took to social media to accuse the casino of racially profiling him

Furious: Meek claimed that the hotel was banning black rappers from it’s property

Strong accusation: Joe Tacopina, Meek’s lawyer, claimed he spoke with ‘a well-placed person inside the hotel’ who told him that a group of Vegas hotels have been attempting to keep rappers off their premises

Tacopina, Meek’s lawyer, claimed he spoke with ‘a well-placed person inside the hotel’ who told him that a group of Vegas hotels have been attempting to keep rappers off their premises.

On Instagram, Meek accused the cabal of casinos of taking black artists’ money when it suited them.

‘Some of these casinos have a bunch of Tatics to keep the level of blacks down …. but love to take our money!!!! This happens to a lot of black entertainers not just me either!! I felt crazy being put out by these white men for no reason!’ 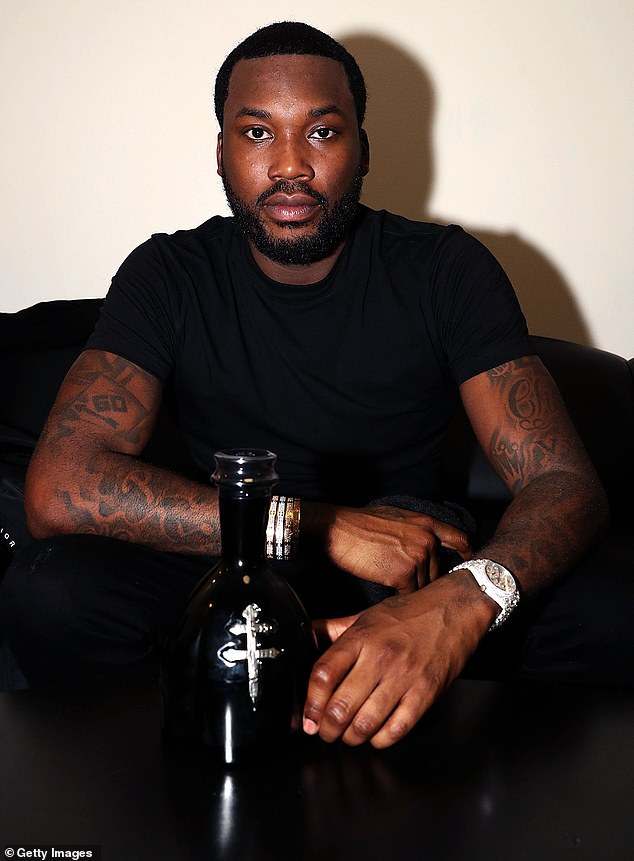 Profiling: ‘Some of these casinos have a bunch of Tatics to keep the level of blacks down …. but love to take our money!!!! This happens to a lot of black entertainers not just me either!!’ wrote Meek on Instagram; shown March 13 in New York City

Later on Saturday, TMZ obtained a letter written by Mill’s lawyer officially accusing the Cosmopolitan of racially profiling his client.

‘… we have learned that the Cosmopolitan maintains a list of African American recording artists who should be denied access for no other reason than than their culture and skin color. Such course of conduct constitutes discrimination per se, in violation of state and federal law, and exposes you to significant monetary damages,’ he wrote.’

‘…we urge you to promptly issue an apology to Mr. Williams and grant him immediate access. In the event you fail to heed this one and only warning, we intend to pursue all legal recourse against you.’ 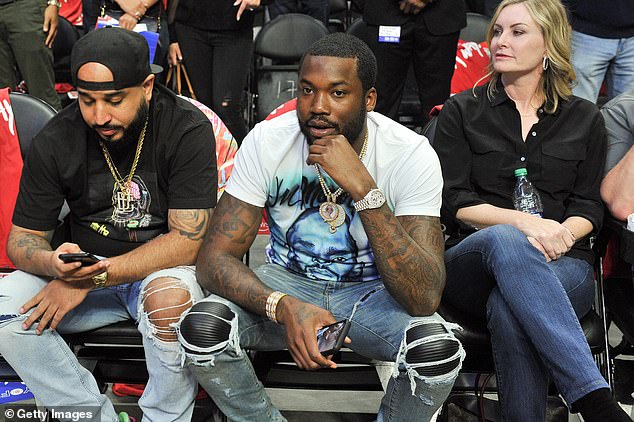 Legal miscarriage: Meek was in and out of court (and jail) in a serious of interactions with Judge Genece Brinkley, who was alleged investigated by the FBI for her conduct in his trial, according to Page Six; pictured April 18 in Los Angeles

Though Meek claimed not to have had any previous negative experiences at the Cosmopolitan, he was involved in a long legal saga that started when he was arrested for possessing a firearm and assaulting a police officer when he was 18.

Mill was in and out of court, and also behind bars, due to later alleged parole violations, though Brinkley was criticized for her judicial conduct, and an FBI investigation was allegedly launched into her participation in Mill’s case, according to Page Six.

Last year, the Philadelphia District Attorney’s office petitioned Brinkley to release Mill from jail due to potential mishandling of his initial arrest in 2007.

She refused, though the Pennsylvania Supreme Court ordered him to be released in April of last year.