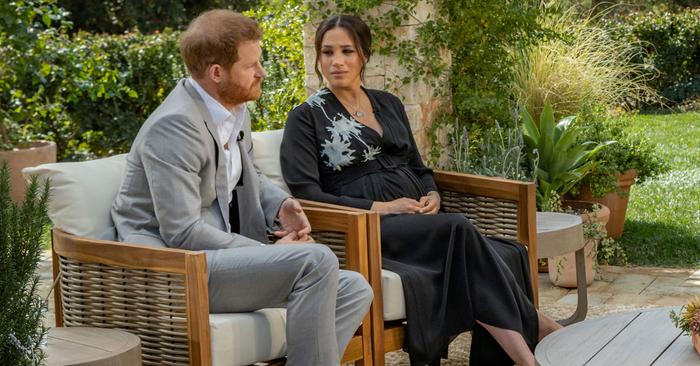 Mark your calendars: Oprah’s highly-anticipated interview with Prince Harry and Meghan Markle is set to air on CBS on Sunday, March 7 at 8 p.m. EST/PST. It comes hot on the heels of other major news from the Duke and Duchess of Sussex just two weeks ago: their adorable baby #2 announcement. While we’re currently six days out from the interview, the network has kindly shared a short preview to whet our appetite.

In the preview, Markle is wearing a dress by Armani embellished with a lotus flower, earrings by Canadian brand Birks (which she’s worn numerous times), and a necklace by British designer Pippa Small. She is also wearing a bracelet that belonged to the late Princess Diana because the couple wanted to include her in the interview. How sweet is that?

Don’t overlook the details of her outfit: The lotus is a symbol of rebirth and revival, paralleling the couple’s reemergence in their brand-new post-royal life.  Markle also included jewelry brands from both Canada and Britain, which are the two Commonwealth countries she’s lived in. And lastly, wearing Princess Diana’s bracelet is such a thoughtful and personal gesture.

In a press release, CBS explained what to expect from the program. “In the two-hour special, Oprah speaks with Meghan, The Duchess of Sussex, in a wide-ranging interview, covering everything from stepping into life as a royal, marriage, motherhood, and philanthropic work, to how she is handling life under intense public pressure,” the statement said. “Later, the two are joined by Prince Harry as they speak about their move to the United States and their future hopes and dreams for their expanding family.”

While we wait for March 7, scroll down to watch the trailer and revisit Prince Harry and Meghan Markle’s cutest family moments.