Nyle DiMarco shames United for bringing him a WHEELCHAIR

EXCLUSIVE: ‘Ooh a deaf person, give him a wheelchair’: America’s Next Top Model winner and deaf activist Nyle DiMarco shames United for bringing him a WHEELCHAIR at LA airport

By Jenny Stanton For Dailymail.com 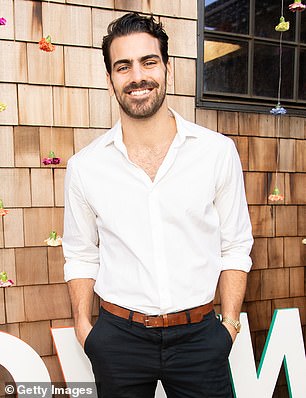 America’s Next Top Model’s first deaf winner Nyle DiMarco has publicly shamed United Airlines for linking deafness with ‘the inability to walk’ and bringing him a wheelchair when he stepped off a flight.

DiMarco told DailyMail.com he flew from from Denver to Los Angeles on Sunday and saw his name and the United logo on a screen on top of a wheelchair as he walked up the bridge linking the plane and the airport.

‘I honestly wanted to sit on it and document the entire wheelchair trip, but I didn’t want to take that away from others in need,’ he said. ‘This has happened multiple times. I’ve tweeted to United several times before.

‘This time I found their ignorance funny. How hearing people associate deaf with inability to walk astounds me.

‘Of course not to say that all deaf people do not need a wheelchair or some sort of assistance. But it is just that I never requested one.’ 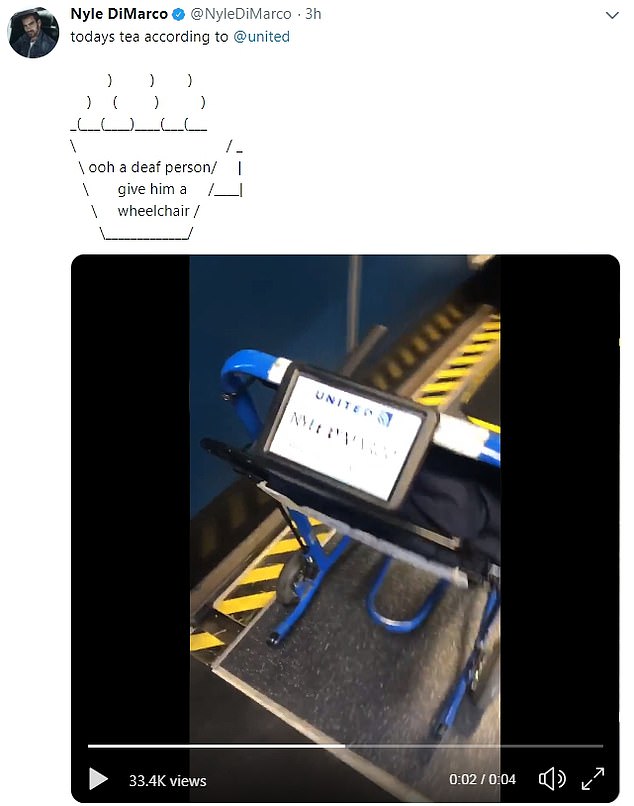 Steve Benjamin replied to DiMarco’s tweet: ‘@united Why do deaf people keep getting given wheelchairs at airports?’

The activist, who runs The Nyle DiMarco Foundation which aims to make the world a better place for deaf people and their families, added: ‘When it happened the first few times I felt frustrated because the airlines have acknowledged and apologized, but it is clear that they’ve never pushed for change, nor have they trained their employees.’

DiMarco says he’s had the same experience in the past and he is aware of this happening to other members of the deaf community with United and other airlines.

In December he revealed the same thing had happened on a Delta flight and the airline apologized.

The winner of Cycle 22 of America’s Next Top Model and Dancing with the Stars  2016 first tweeted United Airlines on Sunday, writing: ‘Ooh a deaf person, give him a wheelchair,’ alongside a video of him walking past the wheelchair adorned with his name.

Steve Benjamin replied to the tweet: ‘@united Why do deaf people keep getting given wheelchairs at airports? I know it’s your job but why? I can walk. Stop doing that! I always ignore it when I see my name on the wheelchair. I walk past it. It fails to follow me.’

It came less than a day after deaf activist and model Chella Man tweeted that the same thing happened to him when he flew with United.

He wrote on Twitter: ‘Love when @united thinks I need a wheelchair because I am Deaf,’ alongside a video of the wheelchair with his name on the top.

In a response on Twitter, United wrote: ‘We can understand your concern, Chella. Anytime a reservation is noted with a special service request, a wheelchair may accompany our agents in the event that the passenger before or after you needs assistance. It is intended to be more efficient in assisting our passengers.’ 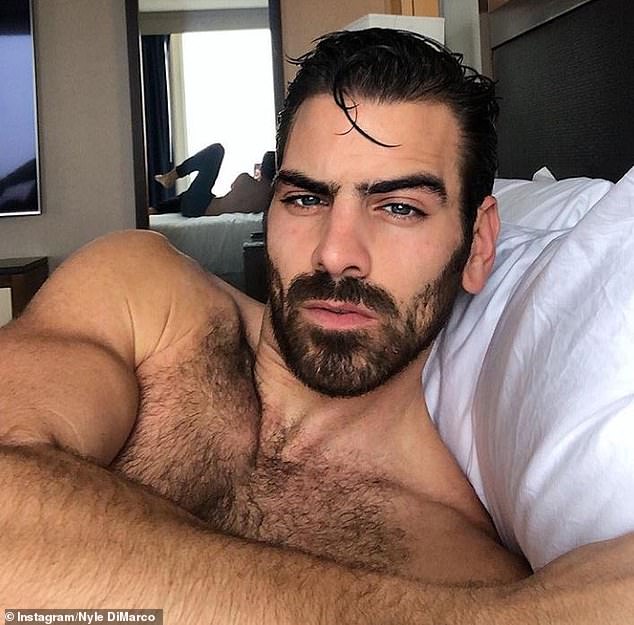 Twitter user Miles reacted to Chella Man’s experience, writing: ‘Please ask beforehand what kind of ‘special service’ someone needs, because things like this can have a huge impact.

‘Deaf people don’t need wheelchairs just because they’re deaf, so don’t being them a wheelchair! It’s a matter of respect, really. Start showing people you care.’

Other Twitter users have raised the issue with airlines in the past.

Meghan Moratz, from Iowa, wrote in September: ‘So I got off my United flight in LA to be greeted by a guy with a sign with my name and a wheelchair…um I’m only Deaf (and I have it noted on my account) not sure how this is going to help me.

‘I appreciate the thought, but actual services for the Deaf and hard of hearing in the airport would be a million times better. It’d be nice to know when I need to board and be able to read the pilot’s and flight attendants announcements on the plane.’

JJ Ray tweeted in May: ‘Dear United, being deaf means ears dont work, legs are just fine. No need for a wheelchair!”

In a statement to DailyMail.com, United Airlines said: ‘United is dedicated to providing convenient and comfortable service to all of our customers. 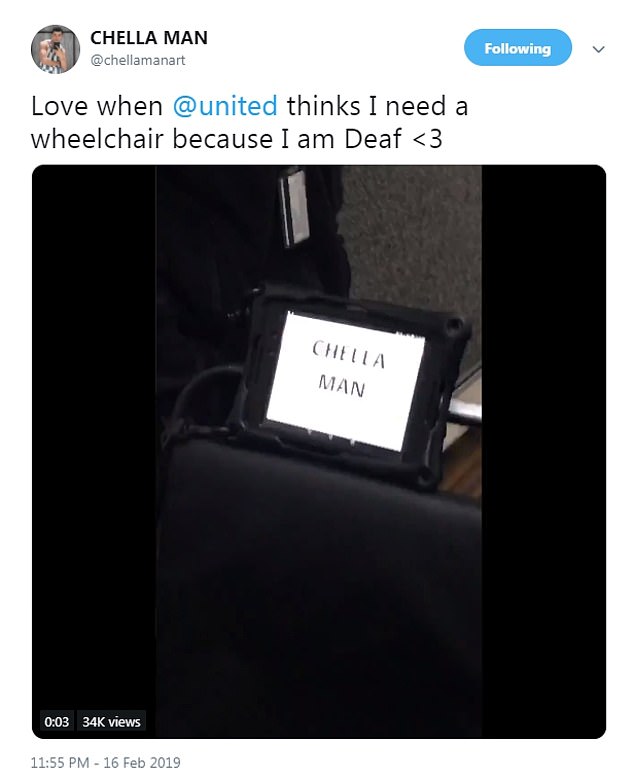 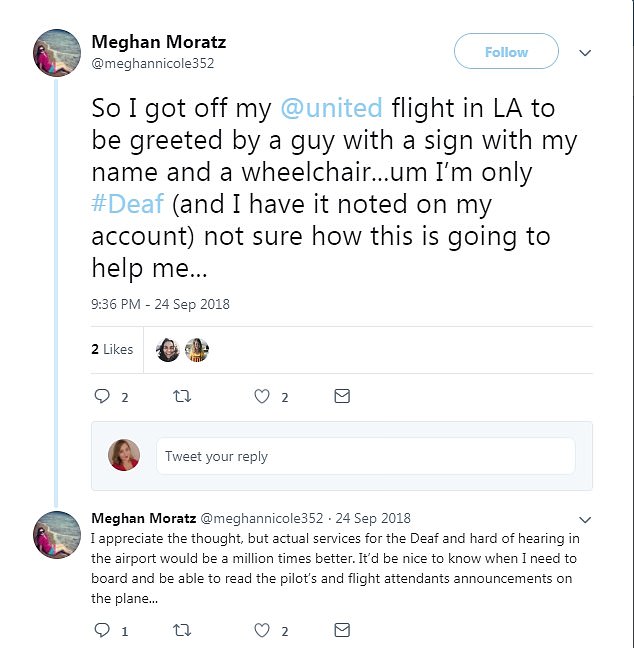 ‘Customers who need additional assistance can contact our Accessibility Help Desk to add information to their reservation.

‘We do not require information concerning the extent of a disability, however, the more information we have, the better prepared we are to meet our customers’ needs.

‘Depending on the extent of information provided, we may provide a wheelchair in case it is needed as we would prefer to be over prepared to assist than under prepared. We are reaching out to these customers to understand how we can better assist them in the future.’