Olivia Newton-John has been pictured in good spirits after hitting back at claims she is ‘clinging to life’ and has ‘just weeks’ to live.

The 70-year-old Grease star, who has been battling breast cancer, was spotted near her home in Santa Barbara on Wednesday.

Earlier this week, reports surfaced that painted a dire picture of the star’s life and suggested she might not make it much longer. 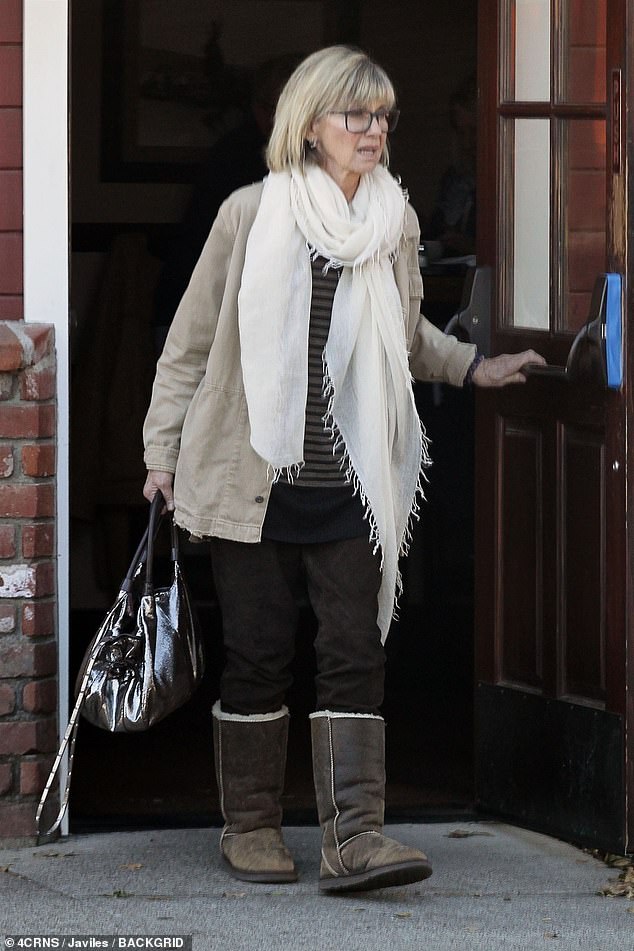 Looking well: Olivia Newton-John was spotted near her home in Santa Barbara on Wednesday following reports her ‘bodily functions appear to be shutting down’

Cameras spotted the Physical singer stepping out with her husband John Easterling to grab a bite to eat in California.

The actress looked well in a comfortable pair of shearling boots, brown pants, a striped sweater and a cozy cream scarf.

Olivia’s blonde bob was blown out straight with bangs and she wore a pair of eye glasses.

She and her husband hopped in the car together and headed out for a lunch date at a local spot. 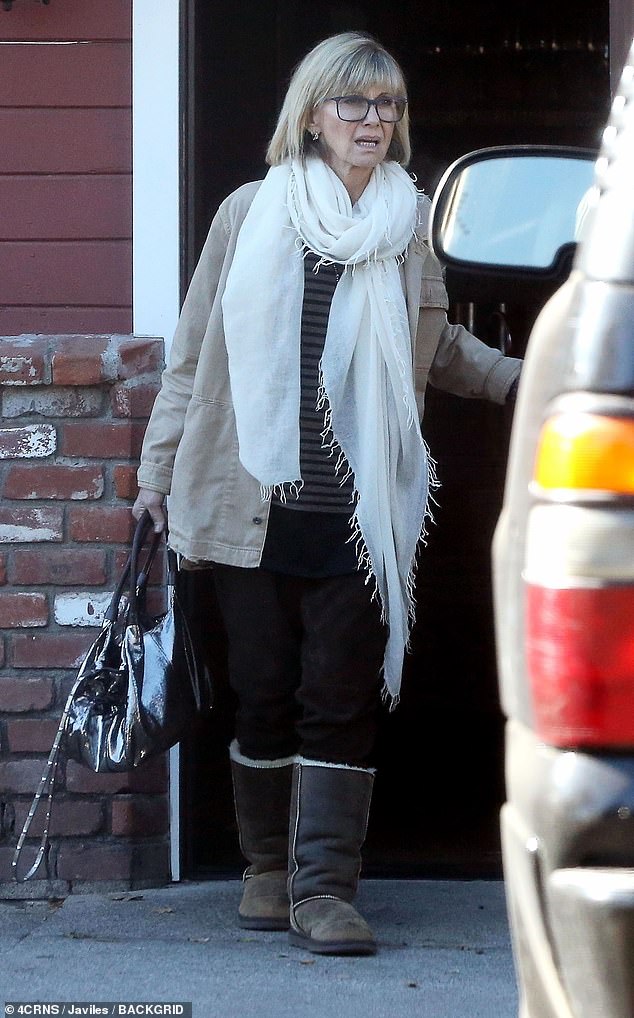 Health scare: A second report from an Australian website claimed the actress had only weeks to live 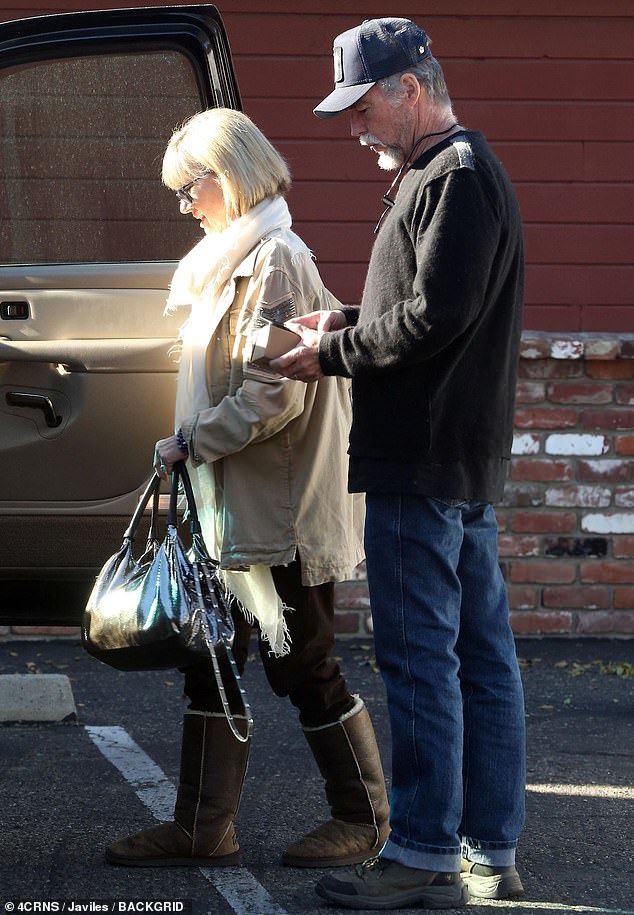 Not true: Following two reports about her failing health, a rep for the star and Olivia herself spoke out about the rumors 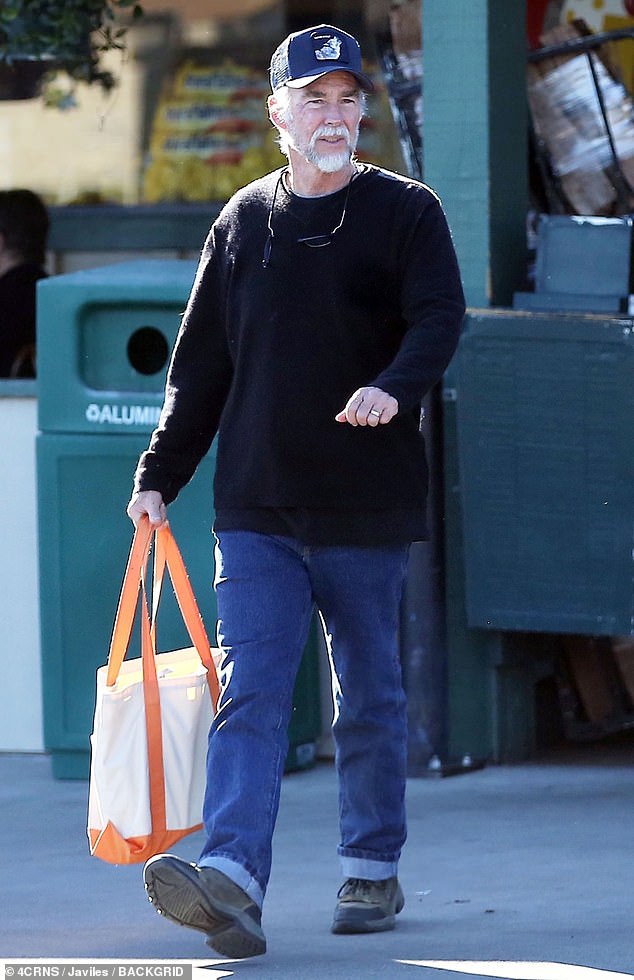 Business as usual: Despite the rumors, Olivia and her husband seemed to have an average day together getting lunch and running errands

The actress appeared in good spirits while out with for an hour-long lunch.

Following the meal, the couple ran errands at the grocery store and filled up the car with gasoline.

Erroneous reports were given by a source who had spoken out about Olivia’s condition to RadarOnline earlier this week. 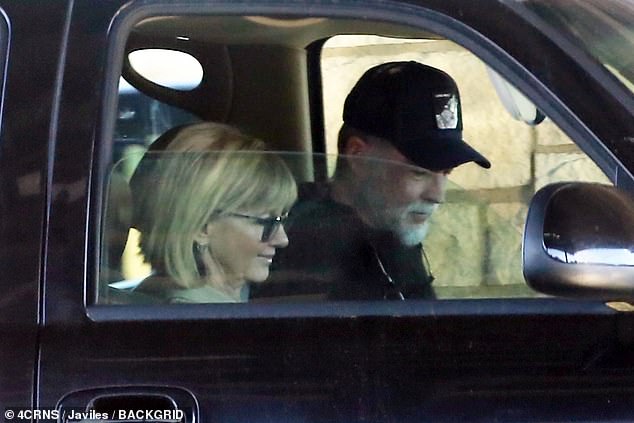 Happy: The Xanadu star smiled in the car with her husband as they enjoyed a day out together 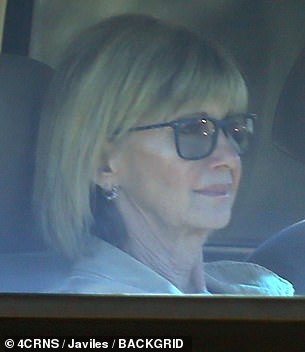 ‘Olivia’s bodily functions appear to be shutting down but she refuses to let go until she makes it through Chloe’s wedding day,’ a source told RadarOnline

‘Olivia’s bodily functions appear to be shutting down but she refuses to let go until she makes it through Chloe’s wedding day,’ the source said.

The Xanadu star’s daughter Chloe Lattanzi is set to wed in 2019.

This was followed by a similar report from Australian entertainment website Now to Love, which claimed she had a ‘prognosis [of] weeks not months’ to live. 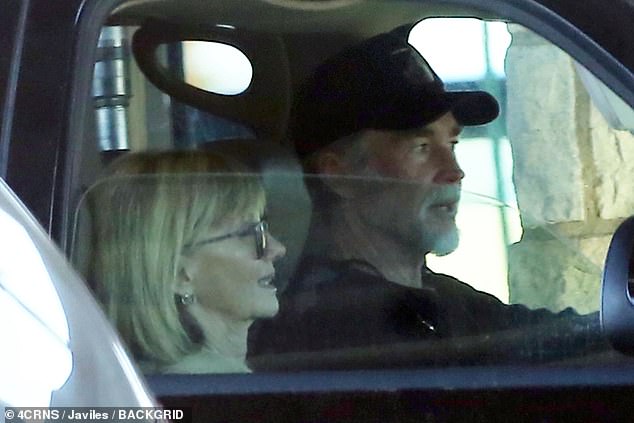 False: A representative for the eighties icon called the rumors ‘ridiculous’ and ‘crap’

A representative for the eighties icon immediately spoke out regarding the rumors about Olivia’s failing health calling them ‘ridiculous’ and ‘crap.’

Following her rep’s comments squashing the story, Olivia took to Facebook with a video showing that she was alive and well.

‘I just want to say that the rumors of my death have been greatly exaggerated,’ she exclaimed in the video. 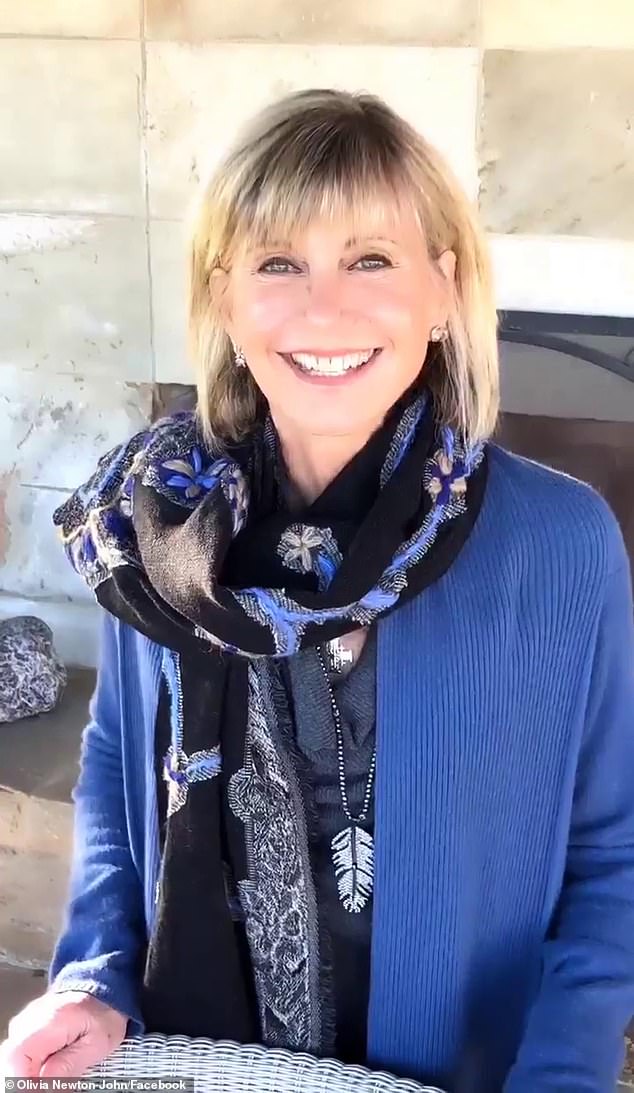 ‘I just want to say that the rumors of my death have been greatly exaggerated,’ Olivia said in a Facebook video following the rumors

‘I am doing great!’ she added. ‘I want to wish you all the happiest and healthiest 2019 that is possible. Thank you all for your incredible love and support.’

‘You can rest assured she is going nowhere,’ Tottie added, before describing the rumors of Olivia’s death as ‘sick’. 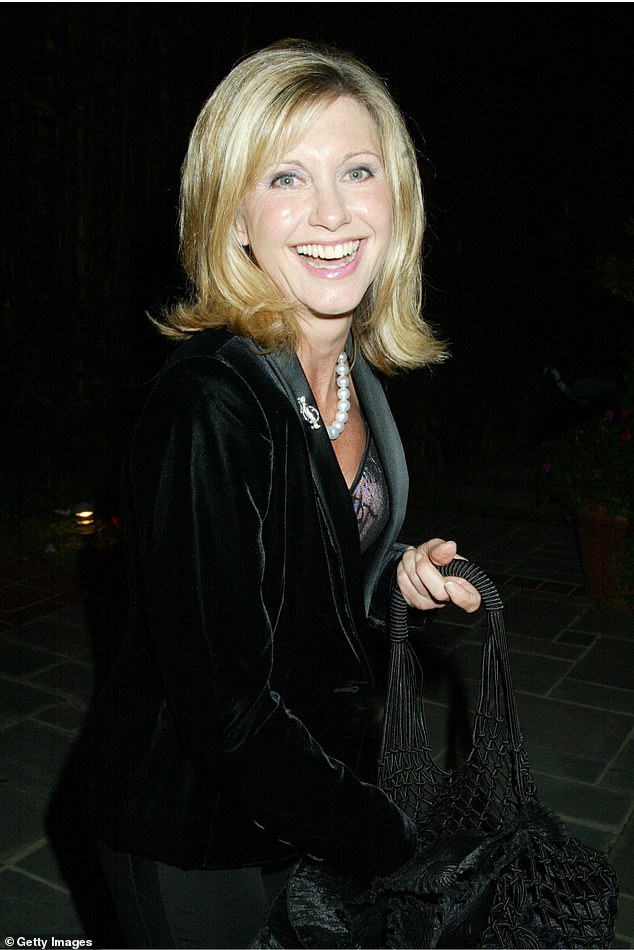 Sad: The star is currently on her third bout battling cancer

Olivia, who is battling cancer for a third time, is being treated with radiation therapy and natural remedies including cannabis oil.

In May 2017, Olivia was diagnosed with breast cancer again, more than 20 years after her first diagnosis.

She also secretly battled breast cancer for a second time back in 2013.

Newton-John came onto the scene with hits in the 1970s like I Honestly Love You. 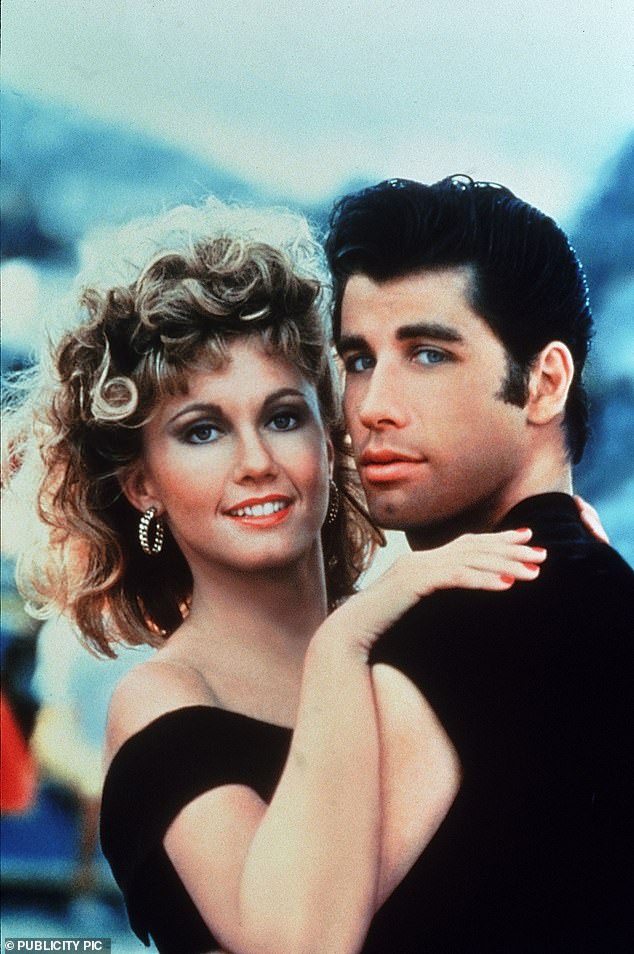 Grease is the word: Olivia Newton-John shot to stardom with the success of Grease

It wasn’t until she was cast in the film adaptation of Grease, opposite John Travolta, that she became a household name.

She was 29-years-old when she stepped into her iconic poodle skirt as goody two-shoes high school student Sandy in the musical hit.

Her career continued both on screen with films like Xanadu and off, with her music career that included the double platinum album Physical. 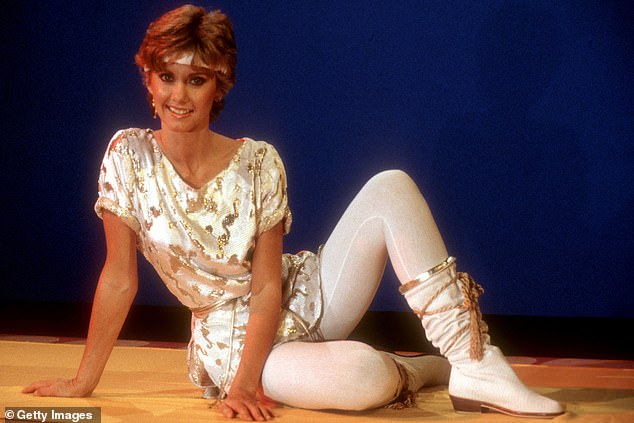