Fisher, 33, reiterated his claims that DC Films President Walter Hamada had tried to ‘destroy’ his ‘credibility,’ before implying that the new Superman movie was a ploy to distract fans from his allegations against Justice League’s replacement director Joss Whedon.

‘Do ya’ll remember that time Walter Hamada and @wbpictures tried to destroy a Black man’s credibility, and publicly delegitimize a very serious investigation, with lies in the press?’ the actor began his furious tweet. 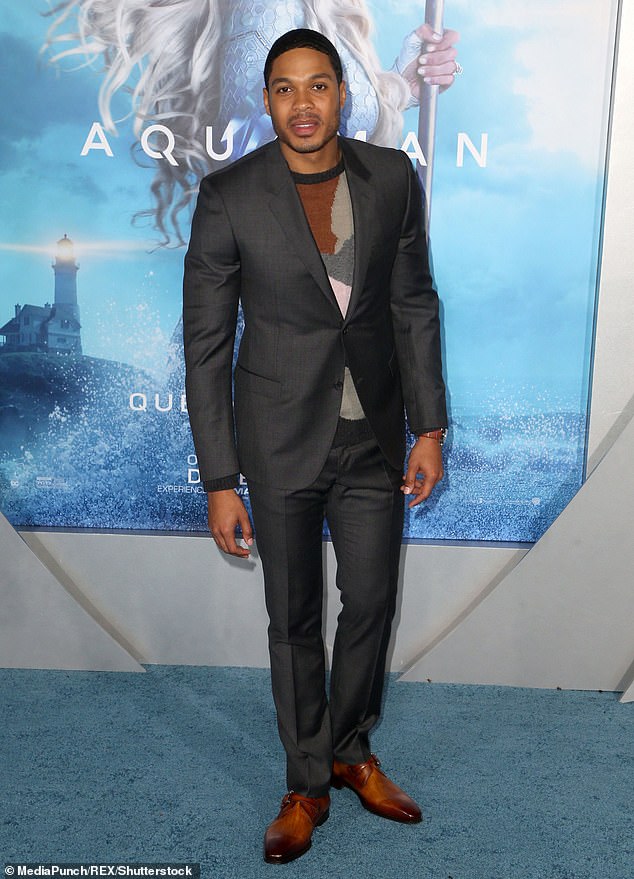 ‘But hey, Black Superman…,’ he added, suggesting fans’ attention would be diverted by the new project.

As he has in previous tweets, Fisher concluded with ‘A>E,’ meaning accountability is more important than entertainment.

On Friday, it was announced that the acclaimed essayist and novelist Ta-Nehisi Coates would be writing a new Superman film, which is rumored to feature a Black Superman.

Coates has been acclaimed for his journalism at The Atlantic, which often focused on the impact of racism on Black Americans, but in recent years he has expanded from non-fiction to writing comic books and publishing his debut novel. 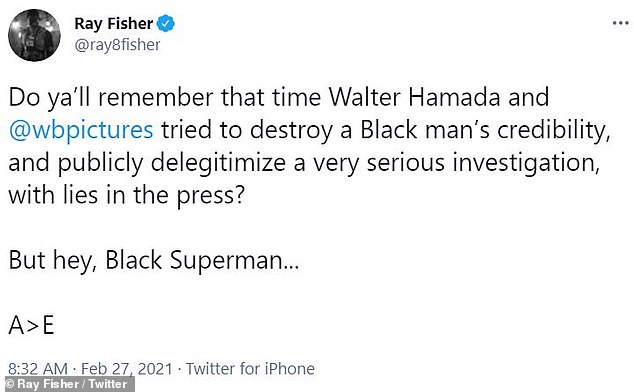 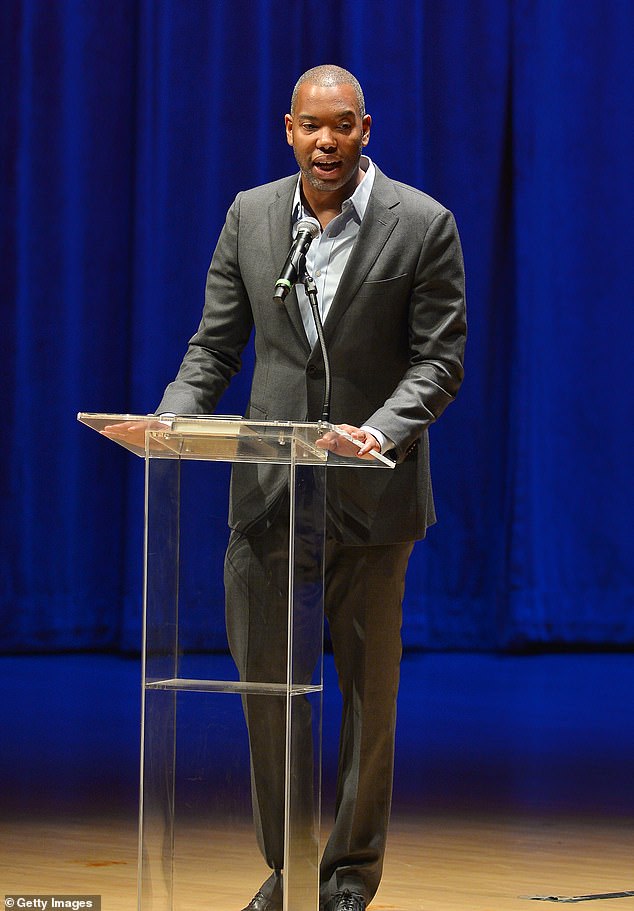 New direction: Essayist and novelist Ta-Nehisi Coates was announced Friday to be writing a new Superman film that is rumored to feature a Black Superman; seen in 2019 in Miami

Fisher had previously accused multiple executives at DC of misconduct, as well as filmmaker Joss Whedon, who was brought in to finish and revise the original version of Justice League after Snyder left the production due to a family tragedy.

‘Joss Whedon’s on-set treatment of the cast and crew of Justice League was gross, abusive, unprofessional, and completely unacceptable. He was enabled, in many ways, by Geoff Johns and Jon Berg,’ Fisher tweeted in July.

‘Once again there are false statements being made about our executives and our company surrounding the recent Justice League investigation,’ it began.

‘As we have stated before, an extensive and thorough third-party investigation was conducted. Our executives, including Walter Hamada, fully cooperated, no evidence was found of any interference whatsoever, and Warner Bros. did not lie in the press. It’s time to stop saying otherwise and move forward productively.’ 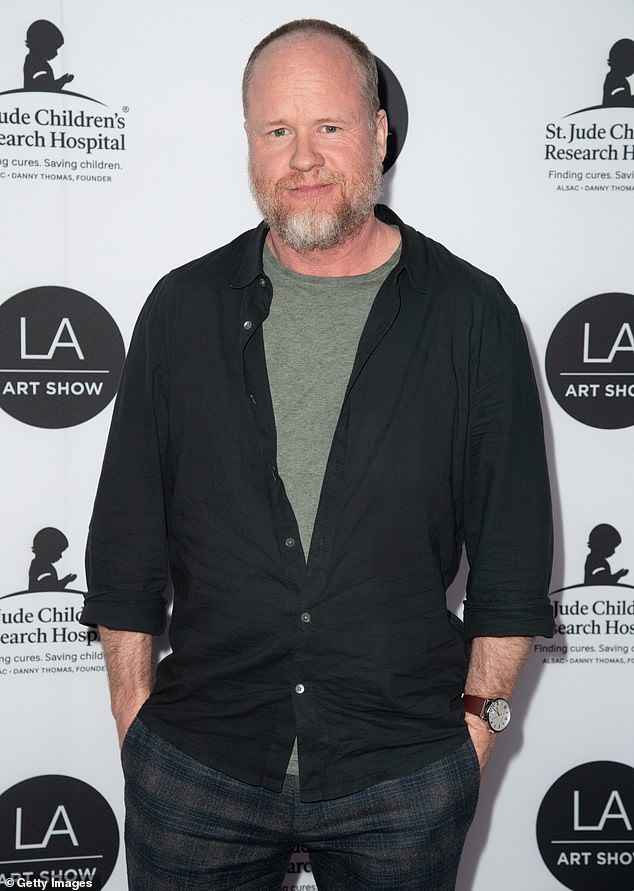 Pointing the finger: Fisher had previously accused Whedon, who was brought in to finish and revise the original version of Justice League, of misconduct; Whedon seen in 2019 in LA 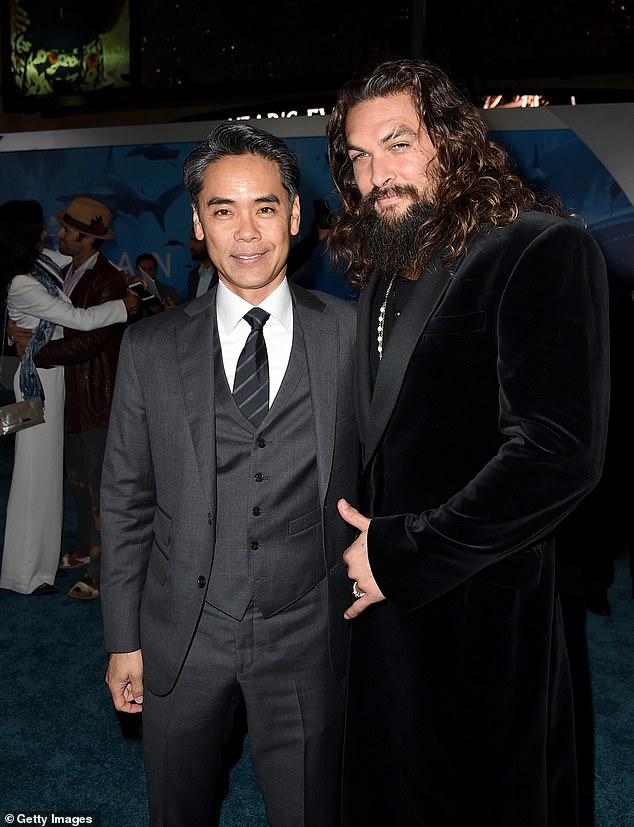 The boss: He claimed Hamada had tried to interfere with the investigation, though he claimed he had somehow prevented that; Hamada (L) seen with Jason Momoa in Hollywood in 2018

Katherine B. Forrest, a former federal judge who investigated Fisher’s complaints, also shared her own statement with WarnerMedia’s.

‘I am disappointed by continued public statements made suggesting that Walter Hamada in any way interfered with the Justice League investigation. He did not,’ she wrote. 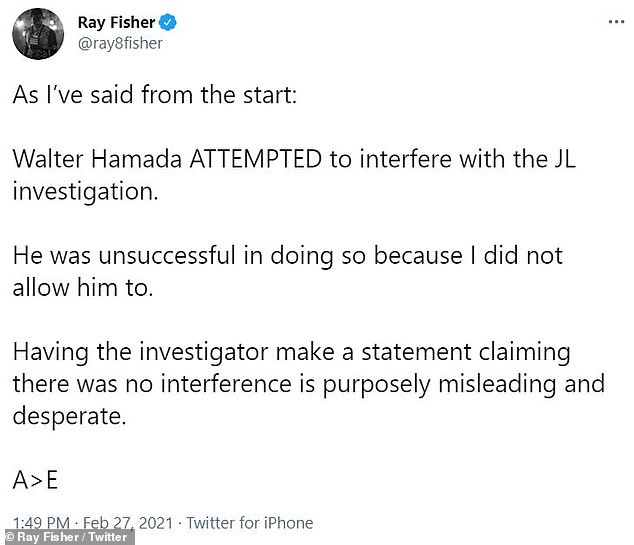 Confusing: Fisher tweeted again following a statement from WarnerMedia in which he claimed he ‘did not allow’ Hamada to interfere with the Justice League investigation 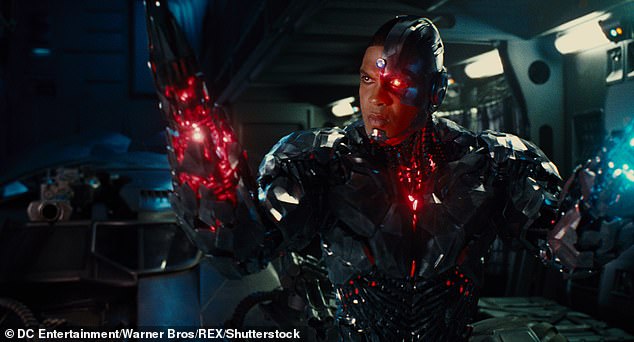 Moving up: Fisher made his feature film debut in Batman V Superman: Dawn Of Justice, before taking a lead role in Justice League

Later, Fisher tweeted again to reiterate his issues with Hamada.

‘As I’ve said from the start: Walter Hamada ATTEMPTED to interfere with the JL investigation. He was unsuccessful in doing so because I did not allow him to,’ he wrote.

‘Having the investigator make a statement claiming there was no interference is purposely misleading and desperate. A>E.’

Fisher’s complaints about Whedon may signal a pattern with the director, who was accused of fostering a toxic workplace on his series Buffy The Vampire Slayer and its spin-off series Angel.

Charisma Carpenter, who appeared for multiple seasons on both shows, claimed in a statement that Whedon belittled her once he learned she was pregnant and asked if she was ‘going to keep it,’ before firing her at the end of the season after she had given birth. 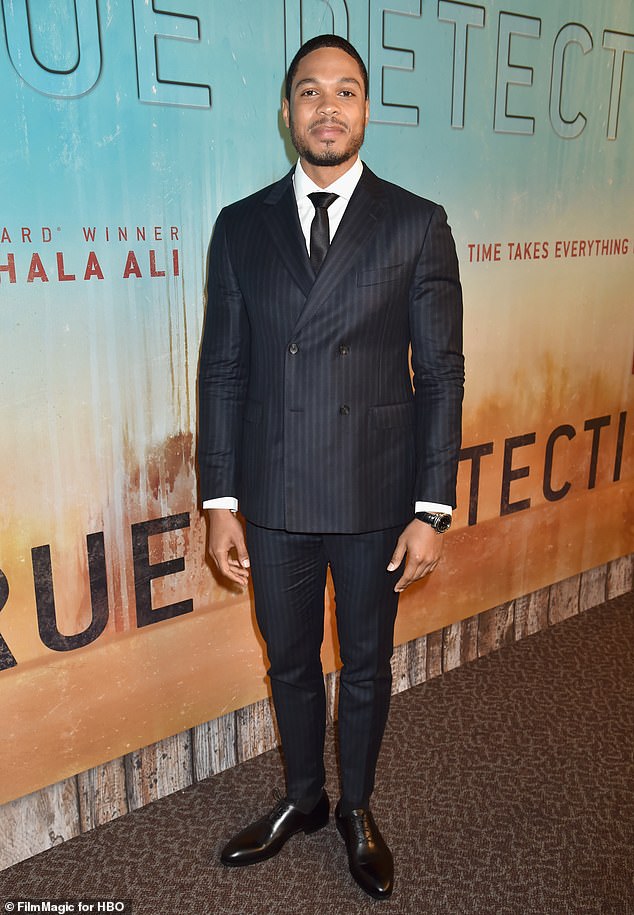 He’s out: Fisher called DC Films President Walter Hamada ‘the most dangerous kind of enabler’ in a tweet in later December announcing he wouldn’t work for DC as long as Hamada was involved; seen in January 2019

In late December, Fisher announced that his time in the DC Extended Universe had effectively come to a close in a tweet blasting Walter Hamada as ‘the most dangerous kind of enabler.’

The actor also wrote that he wouldn’t ‘participate in any production associated’ with the executive.

Following that statement, Warner Bros. announced that Fisher would no longer have a cameo role in the upcoming Flash spin-off due to his stipulations.

Fisher’s tweet arrived just days after Hamada was interview by The New York Times about his plans for DC’s upcoming comics-based films. 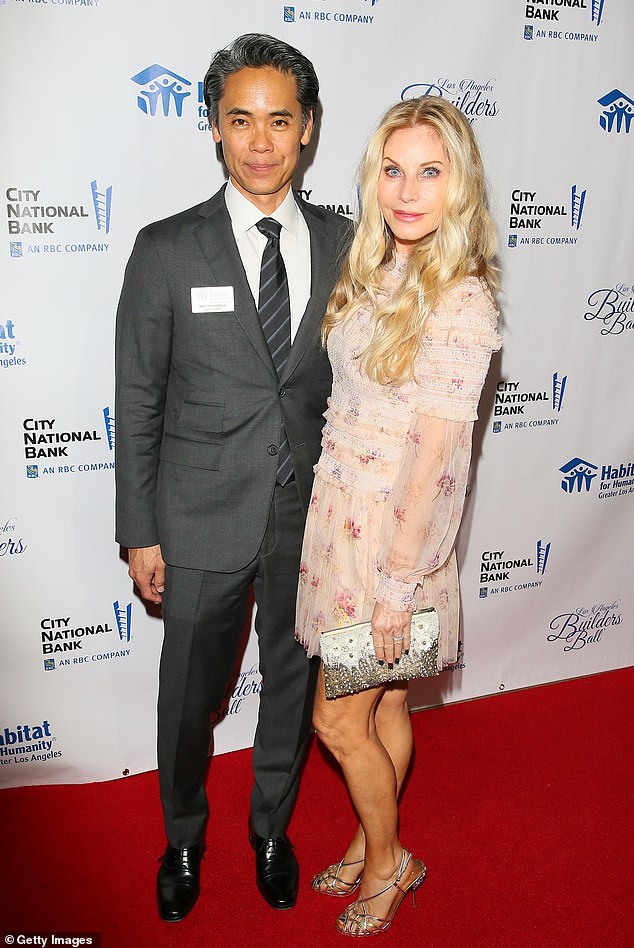 Going forward: In an interview with The New York Times, Hamada described DC’s upcoming plans and said that the new Justice League director’s cut was a ‘storytelling cul-de-sac’ with no connection to future projects; seen with Michelle Hamada in September 2019

The studio president described the upcoming Justice League director’s cut from filmmaker Zack Snyder as ‘a storytelling cul-de-sac’ that wouldn’t impact future films and TV shows, suggesting that Fisher’s connection to the studio might have already been severed.

‘Walter Hamada is the most dangerous kind of enabler. His lies, and WB PR’s failed Sept 4th hit-piece, sought to undermine the very real issues of the Justice League investigation,’ Fisher wrote on Twitter.

‘I will not participate in any production associated with him. A>E,’ he added, referring to ‘Accountability>Entertainment,’ which he has previously tweeted. 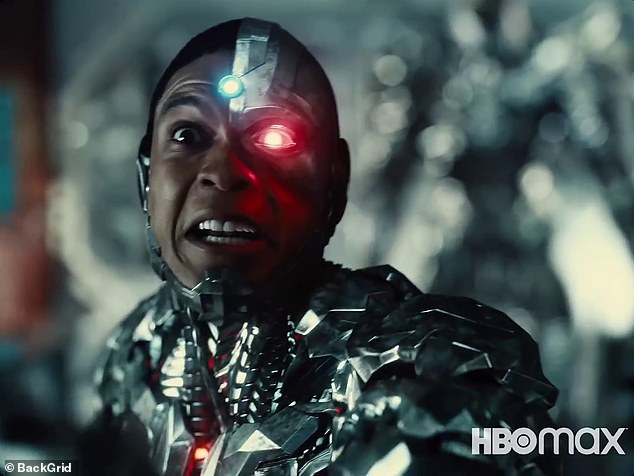 End of the road: Hamada seemed to suggest that Fisher’s time with DC could be limited if future projects ignored the events and characters of Justice League; still from  Justice League: Snyder Cut 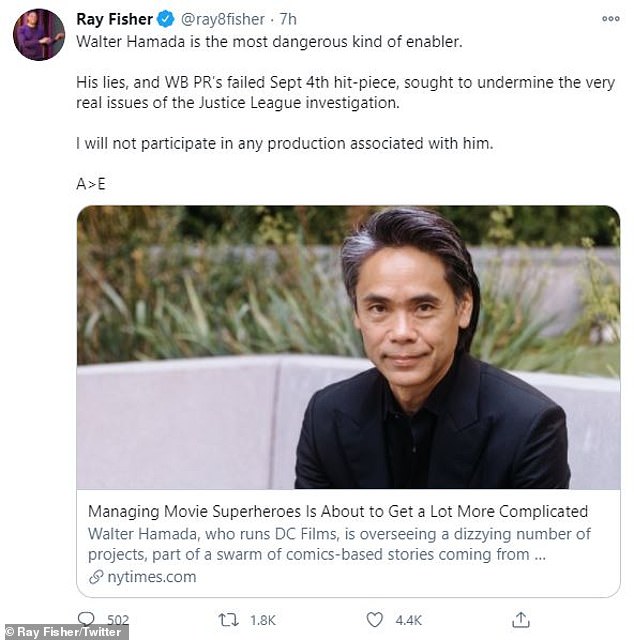 Bad blood: Fisher tweeted Wednesday that he wouldn’t work with DC as long as Hamada was involved

In his initial tweet blasting Whedon, Fisher claimed that ‘He was enabled, in many ways, by Geoff Johns and Jon Berg.’

Johns served as the President and Chief Creative Officer of DC Entertainment from 2016 to 2018, while Berg headed DC Films until late 2017, when he was replaced by Hamada.

In October, the actor detailed to Forbes his problem’s with Hamada and the WarnerMedia investigation that was launched in response to his accusations. 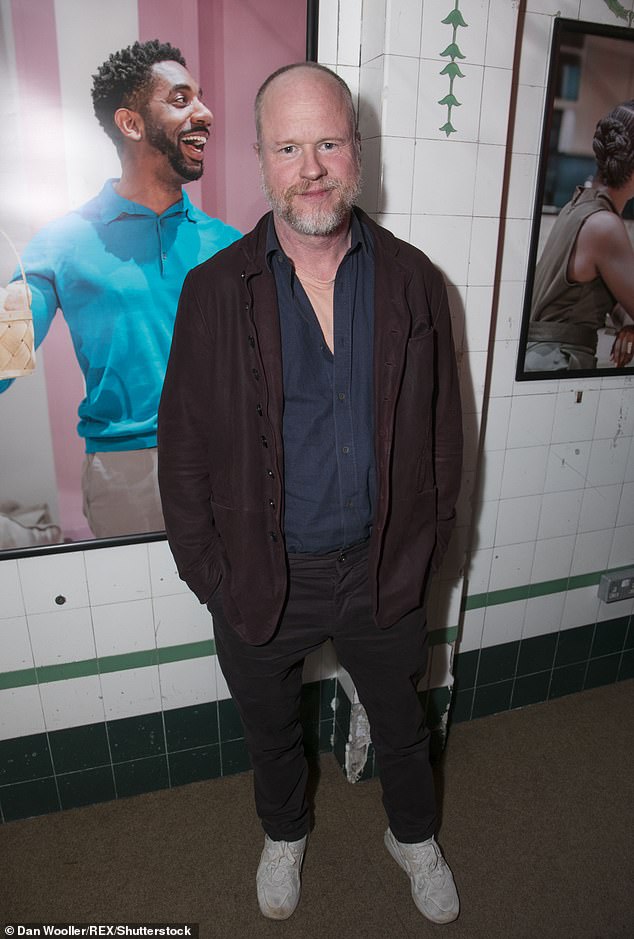 Naming names: Fisher previously accused executives at DC of misconduct, as well as director Joss Whedon, who finished the original version of Justice League after Snyder left the production due to a family tragedy; seen in December 2019 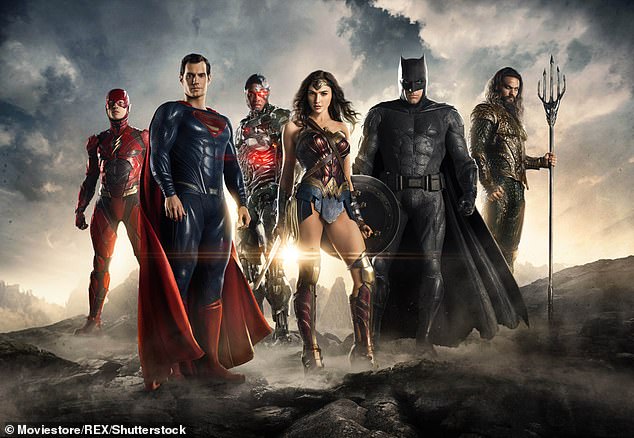 ‘I realized that the notes I ended up getting from Johns during reshoots were just a coded version of the racist things he was saying behind closed doors with the other execs.’

Fisher clarified that he learned of the alleged racist conversations after the fact from people present, and he has so far refused to provide any specifics about the discussions. Keeping quiet: Fisher clarified that he learned of the alleged racist conversations after the fact, and he has so far refused to provide any specifics about the discussions; seen in 2018

The Batman V Superman actor said in October that he was waiting until WarnerMedia’s investigation was complete, though the studio later accused him of refusing to speak to the investigator.

He claimed he had merely ended an interview early, though it’s unclear if he spoke to investigators more fully.

Fisher has said that he will speak in more detail about his accusations following the conclusion of the investigation.

Earlier in December, Wonder Woman 1984 star Gal Gadot revealed to Variety that she had also been interviewed as part of the investigation.

‘I know that they’ve done a very thorough investigation, even just by how much time I spent with them,’ she said, while adding that she was ‘curious to know what’s going to be the outcome.’ 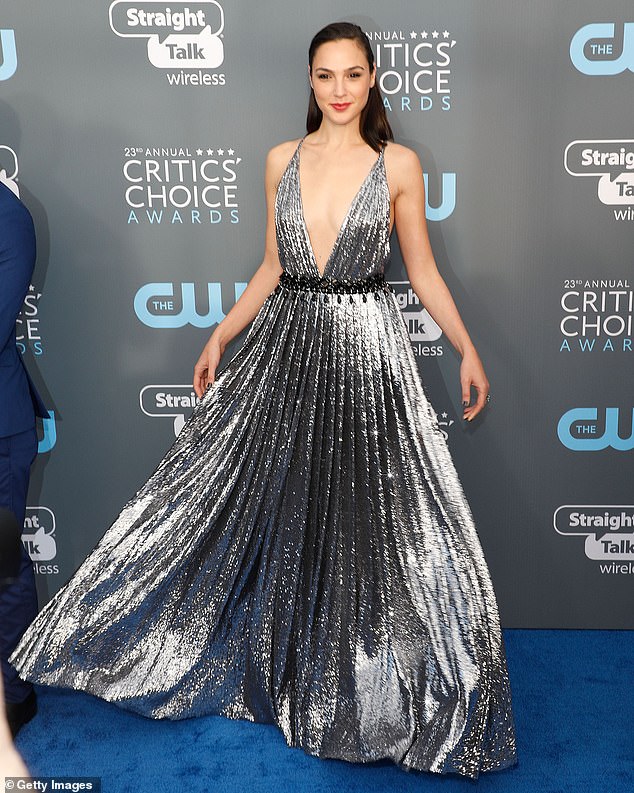 Wide reaching: Earlier in December, Wonder Woman 1984 star Gal Gadot revealed to Variety that she had also been interviewed as part of the investigation; seen in 2018