The first trailer for Dolittle dropped on Sunday starring Robert Downey Jr. as the good doctor who can talk to animals.

Set in Victorian England, the film promises to be an action packed, magical mystery tour as Dolittle and his team of animal pals embark on a perilous mission to find a cure when young Queen Victoria, played by Jessie Buckley, falls sick.

The trailer begins with a blue and yellow parrot flying across the verdant English countryside as a haunting version of What A Wonderful World plays in the background.

Scroll down for videos 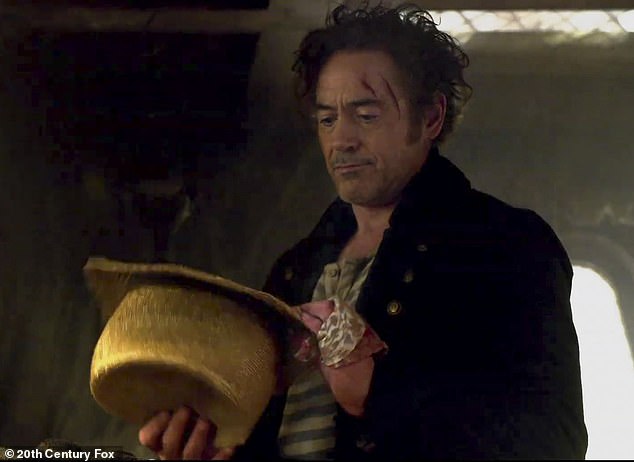 New adventure: Robert Downey Jr. stars as  the good doctor who can talk to animals in the first trailer for Dolittle, which dropped on Sunday

A little girl walks through a country mansion into an amazing study with an elevated toy railway that has creatures hanging from the rails and birds flying around.

‘Are you Dr. Dolittle?’ she asked as the man himself tips his hat onto his head.

Cut to a stagecoach pulled by galloping horses heading for London and Dolittle riding up the steps of a palace on an ostrich, voiced by Kumail Nanjiani.

There’s no indication of what happens, but a very serious Dolittle said, ‘We’ve got no choice but to embark on this perilous journey.’ 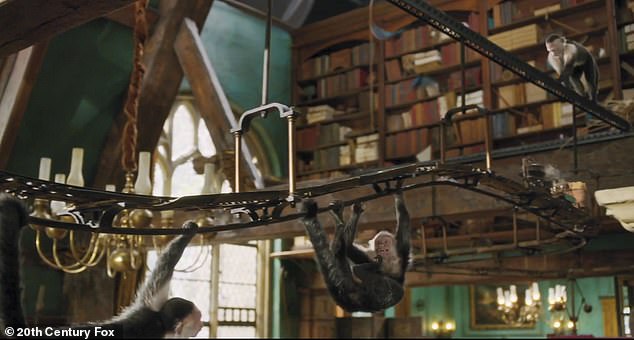 Wonderful vision: Dr. Dolittle’s study is full of fun and wonderful things besides his animal friends, including an elevated toy railway 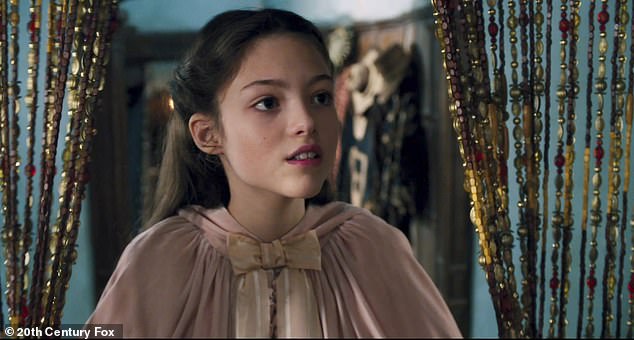 Just one question: ‘Are you Dr. Dolittle?’ asked the little girl which started the exciting adventure 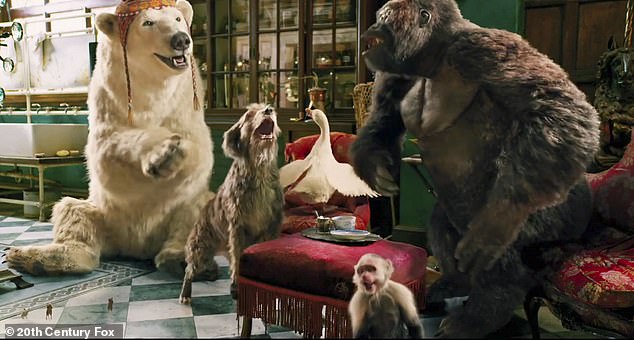 So excited: Dolittle’s animal friends, including gorilla Chee-Chee, voiced by Rami Malek, and polar bear Yoshi, voiced by John Cena, get ready for their adventure

And so the adventure begins. Dolittle headed back to his manor and with his parrot Polynesia, voiced by Emma Thomspon, on his arm as his band of animal friends pack up and are next seen sailing away.

They are attacked by pirates. ‘It’s OK to be scared,’ Dolittle told terrified gorilla Chee-Chee, voiced by Rami Malek, as canon balls smash through the ship.

Somehow they make it to a sultan’s palace on a remote island where Dolittle is imprisoned with a snarling Barry the tiger, voiced by Ralph Fiennes, who really isn’t pleased to see him. 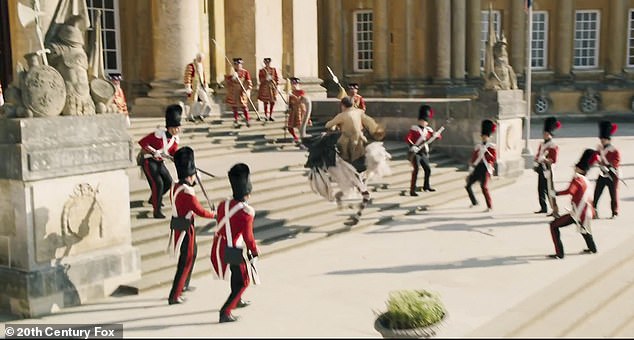 Unusual entrance: Dolittle rides up the steps of a palace on an ostrich, voiced by Kumail Nanjiani, to see the sick queen to the astonishment of the guards 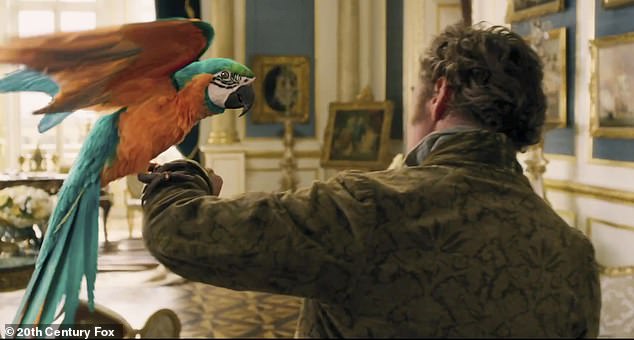 Making plans: Dolittle headed back to his manor with his parrot Polynesia, voiced by Emma Thomspon, on his arm as his band of animal friends pack up and are next seen sailing away. 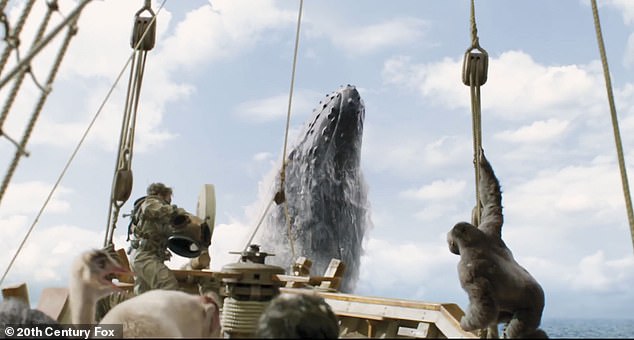 Sea voyage: A whale breached near their ship but it was gone before Dolittle could chat

His gang of animals organize an escape before a desperate attempt to return to England.

It’s Hollywood’s third version of Dr. Dolittle, which kicked off in 1967 with Rex Harrison in the starring role. Eddie Murphy took over in a reboot in 1998.

The new version, written and directed by Stephen Gaghan and previously known as The Voyage Of Doctor Dolittle, is due to open on Jan. 17. 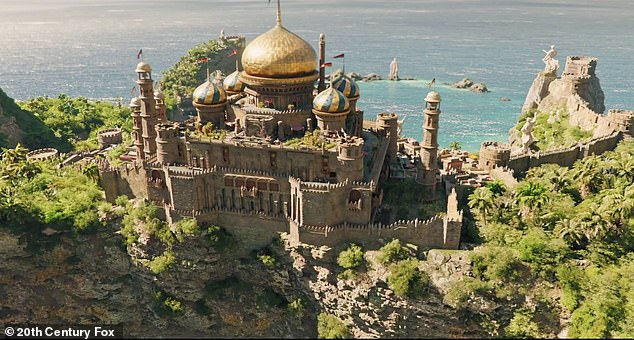 Sultan’s palace: Dolittle is sure he will find the cure for the ailing queen 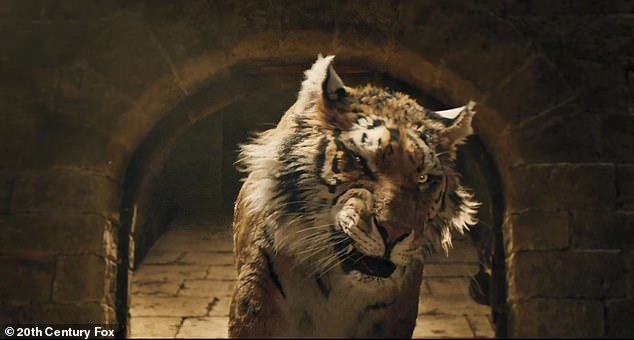 Dangerous foe: He is captured and jailed with Barry the Tiger, voiced by Ralph Fiennes, who really isn’t pleased to see him 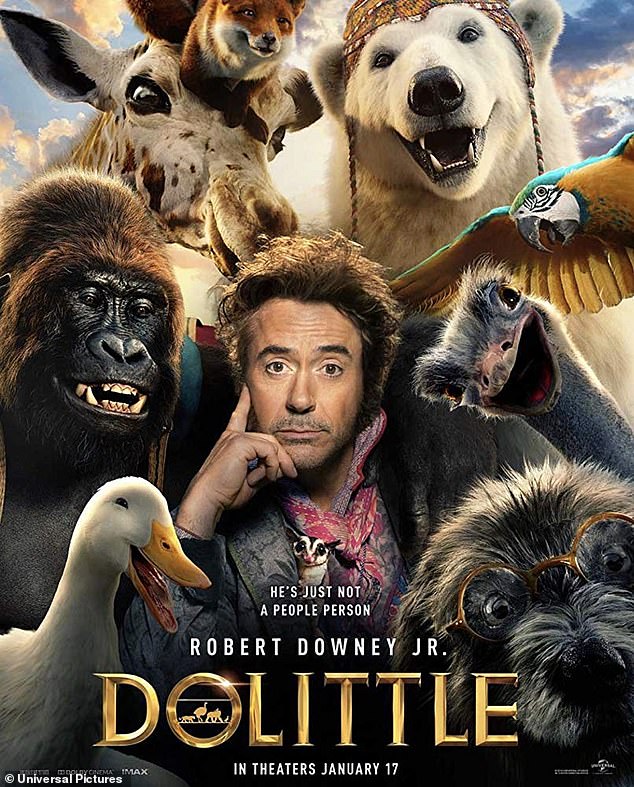 ‘He’s not just a people person’: The first poster from Dolittle also dropped on Sunday