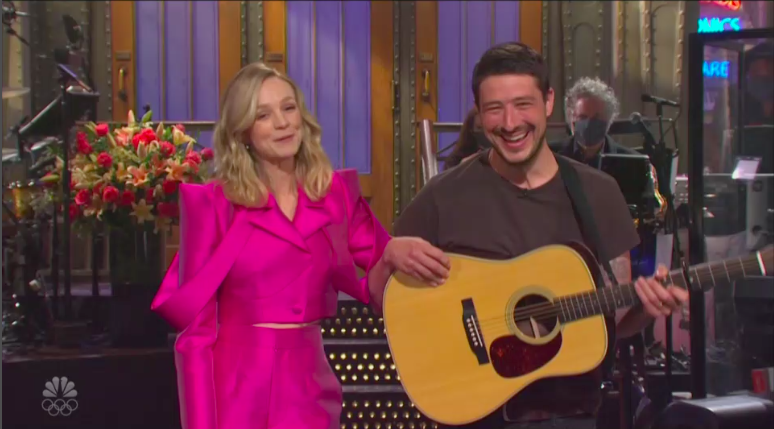 The Oscar nominated Carey Mulligan was the “Saturday Night Live” host on the April 10 episode, but she didn’t do her opening monologue alone: her husband Marcus Mumford, of Mumford & Sons, joined her in Studio 8H (and eventually on stage) of the NBC late-night sketch comedy show.

After talking about her time spent with her family during the COVID-19 lockdown (including how her children’s bedtime stories suddenly became very long and often included “recently divorced dragons and unicorns with pill problems”), she mentioned that she had left her family back home, overseas, to come to New York City for “Saturday Night Live.”

But to Mulligan’s fake surprise, her husband, Mumford, popped up in the studio audience to say hello, tell her he left their kids with “the Sons” and ask if the show booked a musical guest for the evening.

They did, of course, and it was rapper Kid Cudi, but he noted that he would be “very happy to do it,” should the show “end up needing anyone.”

He then pulled out his guitar to show that he was properly prepared, and he began playing because, as he put it, he received a “secret couple signal for when you want me to play the guitar.” Mulligan, on the other hand, was “alarmed that you think that we have that.”

Mumford’s excitement to be there was so infectious, Mulligan allowed him to come on stage with her for the end of the monologue where she told everybody to stick around.

Mumford & Sons did appear on “Saturday Night Live” as the musical guest before, most recently in December 2018.