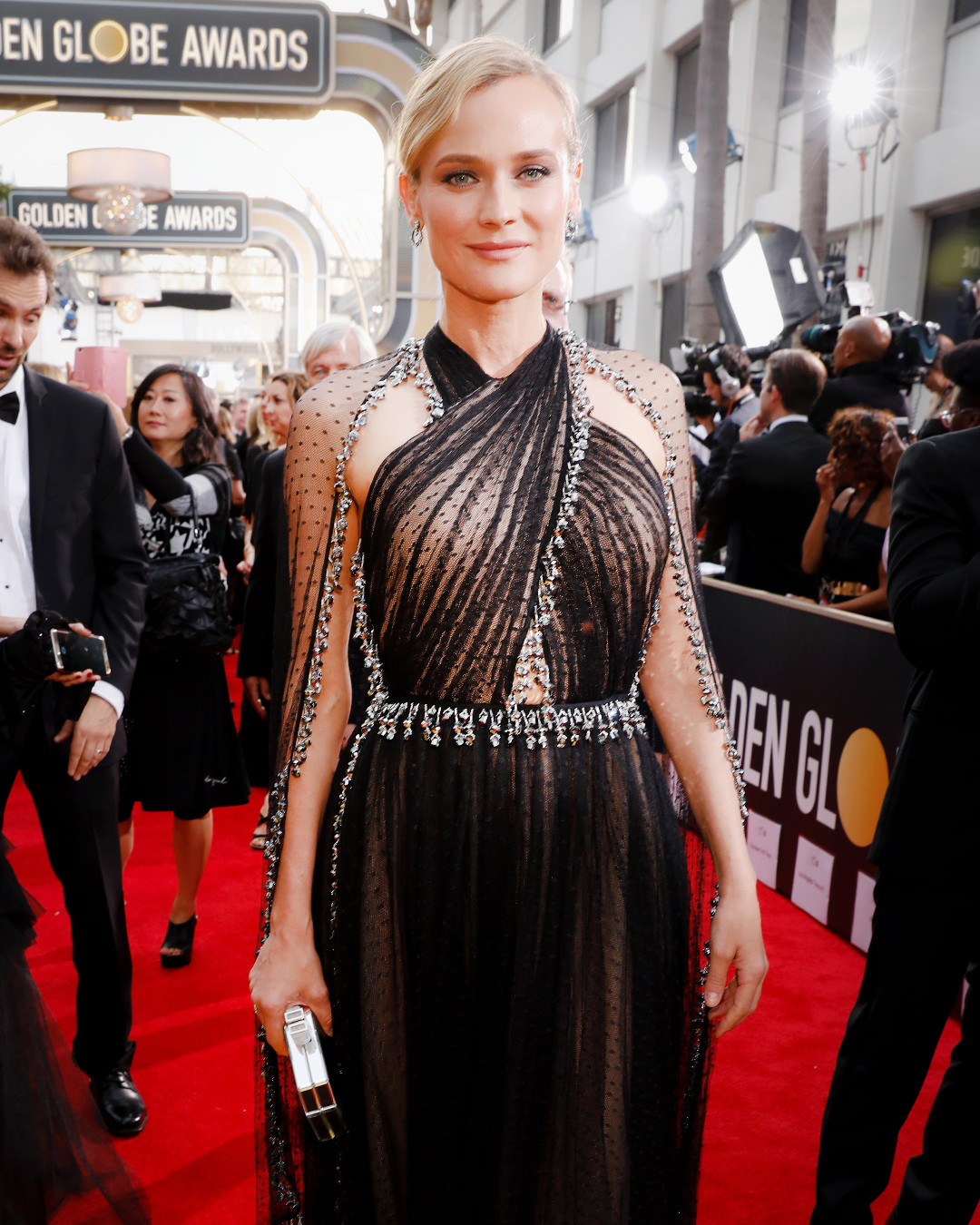 Get ready because the 2019 red carpet season is almost here!

On Sunday, award season commences with the Golden Globes 2019, and you know what that means—epic, stop-and-stare red carpet fashion. Golden Globes regulars like Nicole Kidman, Amy Adams and Regina King are sure to continue their year-over-year fashion streak of awing looks. However, this year, Constance Wu and SZA, who received their first nominations, will appear on the carpet in statement-making fashion. It’s going to be an fashion event you don’t want to miss.

As the anticipation increases, we’re revisiting past years and getting more excited about what’s to come. Last year, the vast majority of celebrities wore black in support of the Time’s Up movement, an initiative to fight sexual harassment, assault and inequality across all industries. It was a “black sea of luxury labels.” However ,knowing that everyone would wear the same hue, celebs stepped out of the box in terms of fabric choice, dress silhouettes and accessories (See: Diane Kruger‘s sheer cape). The result was epic.

While 2018 was different from previous years, we’ve never been disappointed by the annual event’s red carpet fashion. Awing gowns, beautiful bags, shoes that would make Carrie Bradshaw scramble from her credit card—this award show reveals the Hollywood glamour that everyone loves.

Prepare to be mesmerized by the best Golden Globes looks of all time below!

In Tom Ford, the Wonder Woman actress was a sight to see, wearing a ruched dress and cropped tuxedo jacket at the 2018 Golden Globes.

Penelope brought glam to the 2018 Golden Globes red carpet with an lace and embellished gown from Ralph & Russo.

The Maleficent star stuns in a Atelier Versace black dress under a sheer layer with feather-trimmed cuffs for the 2018 award show.

The Shape of Water actress is a shining star on the 2018 carpet, thanks to an embellished black dress from Tadashi Shoji.

Not only did the Blackish star win a spot on the best dressed list in her stunning, sparkly Zuhair Murad calf-length dress, but she won the night winning Best Performance by an Actress in a Television Series, Musical or Comedy.

It was a modern-day princess moment at the 2017 award show. The actress was adorned in Zuhair Murad Couture, featuring romantic, rose-hued lace.

It was a show-stopping moment for Justin Timberlake‘s other half, who arrived on the 2017 red carpet wearing a plunging, embellished Elie Saab gown, which is a change from the star’s typical style.

The Westworld star proved you don’t need to wear a glam gown to make the Best Dressed list. Her mens-inspired Altuzarra ensemble, seen at the 2017 Globes, was tailored to perfection.

The blonde beauty made mouths drop at the 2015 Golden Globes in this stunning Gucci gown accessorized by an eye-catching serpent necklace.

From the 2013 Golden Globes red carpet, we daresay this is coral Oscar de la Renta gown paired with blinding Harry Winston jewels is Jessica’s most brilliant look to date.

The Bridge actress was a total winner in this sleeveless, silver Emily Wickstead dress at the 2015 Golden Globes.

Talk about va-va voom! No stranger to the if-you’ve-got-it-flaunt-it approach to dressing, the bombshell played up her covetable curves in a form-fitting strapless Vera Wang gown at the 2012 Golden Globes. Aside from perfectly hugging every curve on her body in the right place, the dress helped balance the star’s hourglass figure with its fabulously flared mermaid tail.

Stunning! She’s not afraid to play with bold colors in this peachy Calvin Klein number at the 2011 show.

In a word: Angelic. Keira is breathtaking back at the 2006 awards show wearing a delicate Valentino dress with vintage Cartier earrings.

The star was way ahead of the winter white trend in this stunning strapless Dior gown at the 2009 Golden Globe Awards. The dress’ otherwise straightforward silhouette stood out thanks to the unique folded bustle at the waistline, which added an unexpected wow factor. A turquoise Van Cleef & Arpels statement necklace—and the actress’ perfectly tanned skin!—popped perfectly against the dress.

Also at the 2013 show, the actress masters edge and elegance in the form of this Alexander McQueen design.

For the 2012 Golden Globes, the star embraced a high-fashion look from Atelier Versace with a one-shoulder dress with a red accent along the neckline.

No amount of rain could put a damper on the Spanish stunner’s look at the soggy 2010 Golden Globes. Intricate detailing like a bead-embellished neckline and a tiered lace fishtail added gorgeous visual interest to her gown. She accessorized with Chopard diamonds—and a fab umbrella.

The globes weren’t the only things that were golden at the 2011 award show! The Les Misérables star glittered in a gorgeous Armani Privé Fall 2010 gown bedecked with shiny Swarovski crystals.

With its beautifully blush shade and delicate tulle overlay, the star’s darling Dolce & Gabbana gown wowed us with its whimsically romantic design. She complemented her fabulously feminine look with filigreed Lorraine Schwartz cuffs.

In a nod to old-school Hollywood glamour, the petite actress opted for a classically chic style with a red-hot Reem Acra strapless with a mermaid tail. A scalloped sweetheart neckline added a modern twist to her look at the 2009 award show.

The star turned heads in a chocolate brown princess dress by Marchesa embellished with dazzling gold sequins at the 2011 Golden Globe awards. She smartly styled her hair in a casual down ‘do to balance out her dramatic dress.

The red-headed beauty added edge to her two-tone Lanvin gown by cinching it with an eye-catching eagle belt at the 2012 Golden Globes.