Sophie Turner PIC EXCL: Star cradles her dog Porky days after her pet Waldo was killed by a car

Sophie Turner PICTURE EXCLUSIVE: Star holds back tears as she cradles her surviving dog Porky on a video shoot with husband Joe Jonas… days after her beloved pet Waldo was killed by a car

By Laura Fox For Mailonline

Sophie Turner couldn’t contain her emotions as she cradled her beloved dog Porky while on a video shoot with her husband Joe Jonas on Friday.

The Game Of Thrones star, 23, looked close to tears as she stepped out in New York City with the Alaskan Klee Kai, just two days after his brother Waldo was killed in a road accident.

Sophie and Joe were left devastated after their pet Waldo broke free and ran into the street during an outing on Wednesday. He was subsequently struck by a car and later died, according to TMZ. 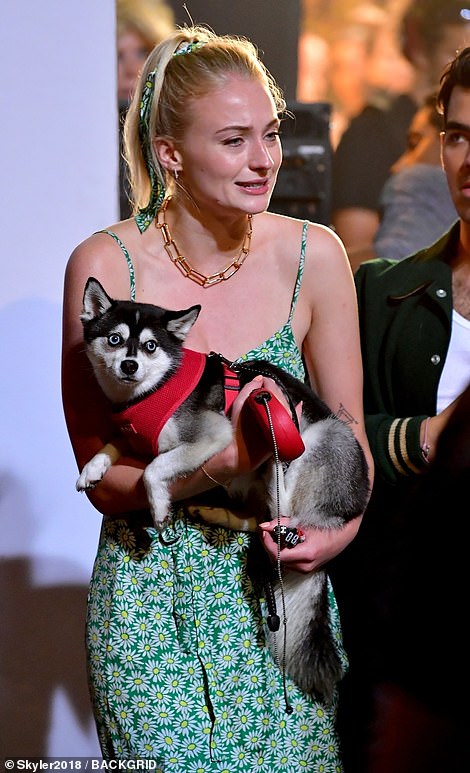 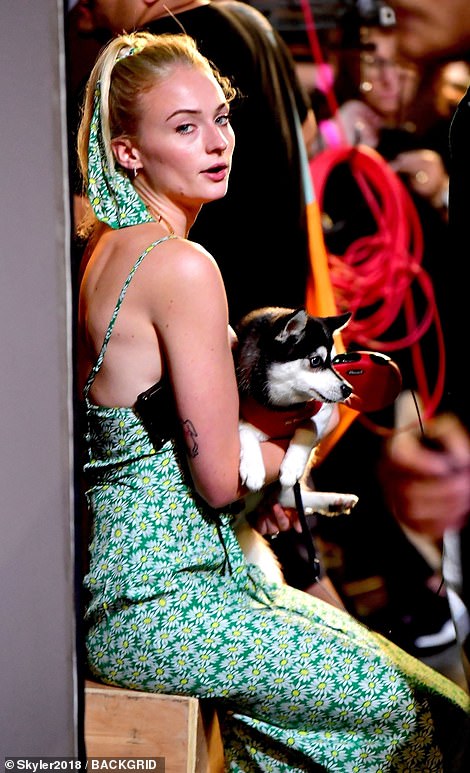 Sad: Sophie Turner couldn’t contain her emotions as she cradled her beloved dog Porky while on a video shoot, just days after her beloved pet Waldo was killed 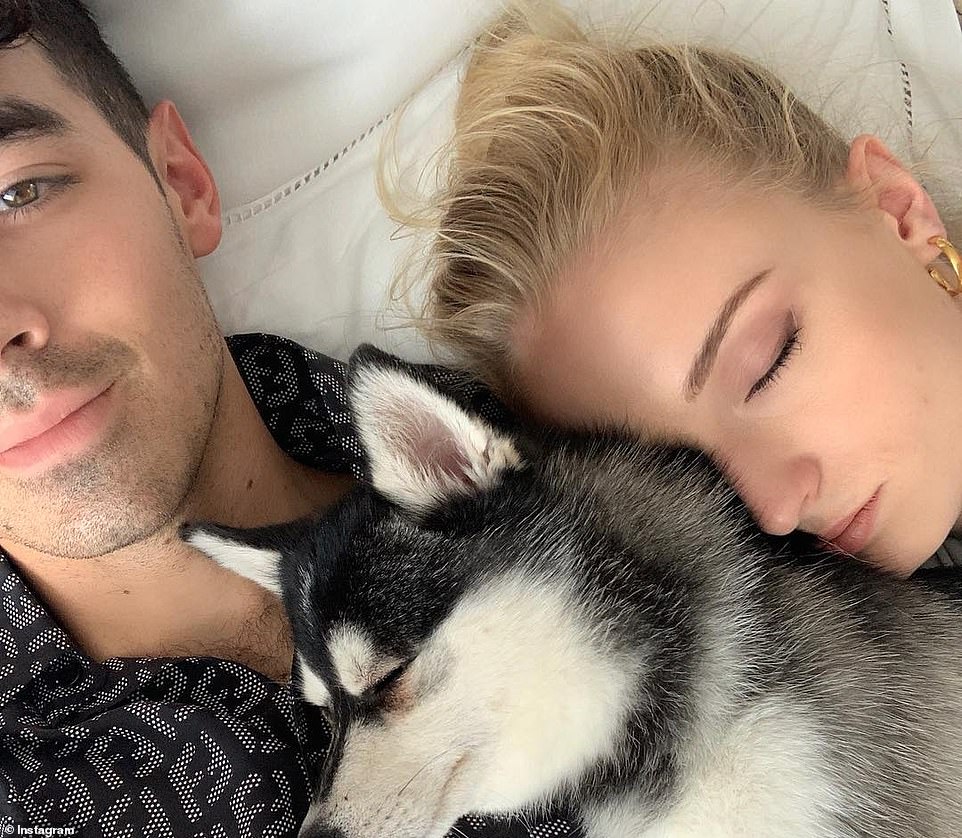 Upsetting: Sophie and Joe were left devastated on Wednesday when their dog was struck by a car, after he escaped his lead while on an outing with his dog walker

Sophie displayed her figure in a fitted green floral dress as she headed to the shoot hand-in-hand with her husband Joe, emotionally cradling her pet in between takes while Joe – in a red shirt covered in a stereo print – openly supported her.

The couple were seen walking hand-in-hand to a park with Porky, as they comforted one another.

Sophie and Joe – who married in Las Vegas in May followed by a second ceremony in France last month – were left devastated when they learned that their pet had been killed on Wednesday.

According to TMZ, the tragedy took place while Waldo was on a walk with their dog walker, when he broke free of his lead after being spooked by a pedestrian. 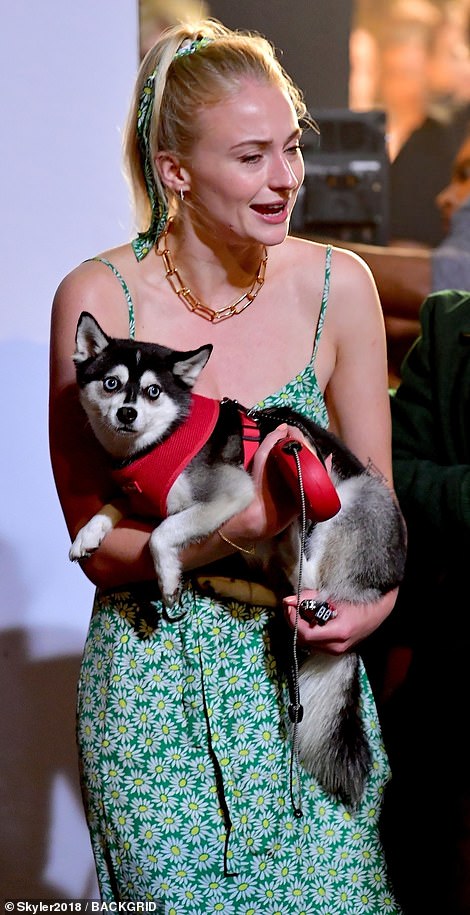 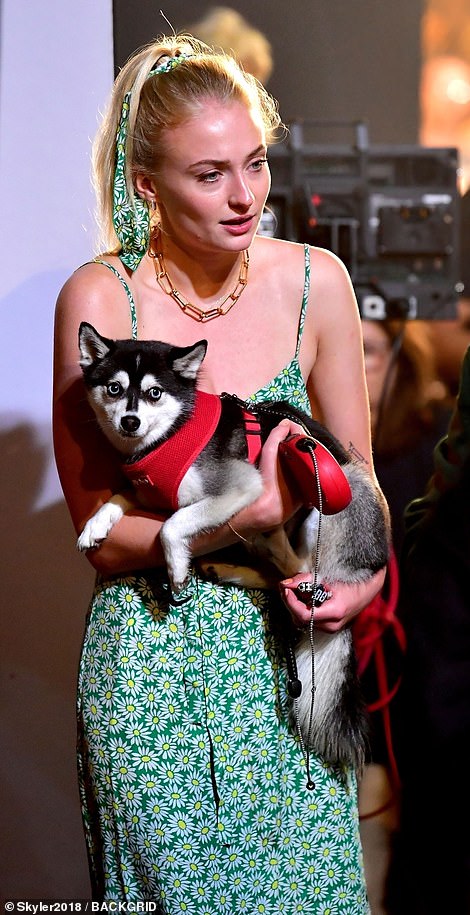 She loves him! The outing seemed to be difficult for Sophie as she stepped out in New York, emotionally cradling her second dog in her arms

Emotional: Sophie kept her other pet dog close after his brother’s death earlier this week, and couldn’t hold back her tears as she brought him out following the tragedy

The dog was then struck by a car and later died, but Sophie and Joe are not blaming their dog walker for the tragedy.

But the couple did report the incident to the police on Friday, reportedly telling the authorities that they were late in filing the report because the emotional distress from Waldo’s death prompted an emergency trip to the therapist.

Sophie and Joe originally adopted Waldo back in April 2018, and also still have their surviving dog Porky from the same litter.

Joe originally bought Porky as a surprise for Sophie and the couple adopted Waldo later when they wanted to add to their brood.

Mourning: Sophie displayed her slender figure in a fitted green floral dress and trainers as she stepped out in the city for the video shoot with her surviving dog 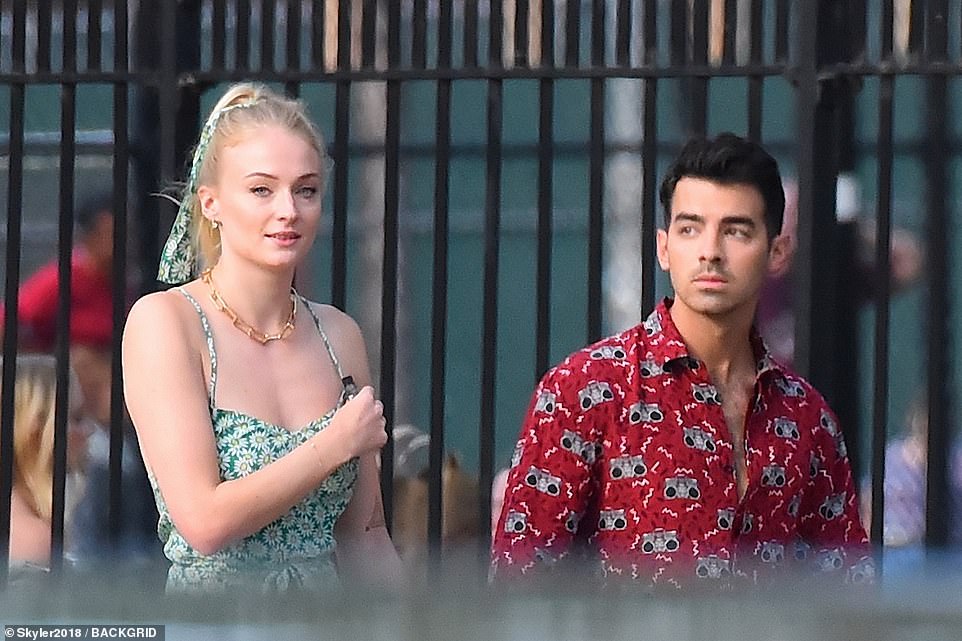 Staying strong: It was reported that Sophie and Joe visited an emergency therapist to cope with the aftermath of their dog’s death, and used this as the reason why they delayed reporting the incident to police 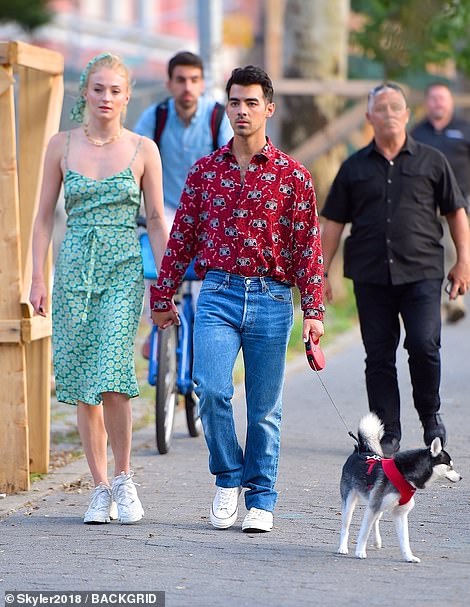 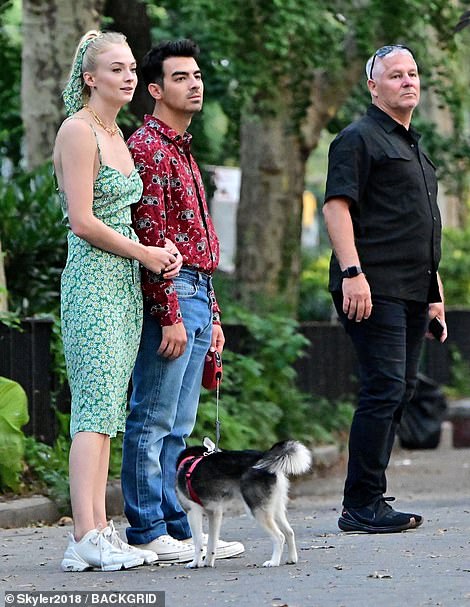 United: The couple married in May 2018 in a surprise Vegas ceremony, before tying the knot again in a lavish ceremony in France last month with their friends and family in attendance

Devastated by the loss, the DNCE singer was also seen walking Porky around their NYC neighbourhood on Thursday, after the incident.

Sophie and Joe said their second ‘I do’s’ at lavish Château du Martinet in the South of France in a sunset ceremony last month.

The wedding marks their first official ceremony after getting married in Las Vegas after the Billboard Music Awards in May. 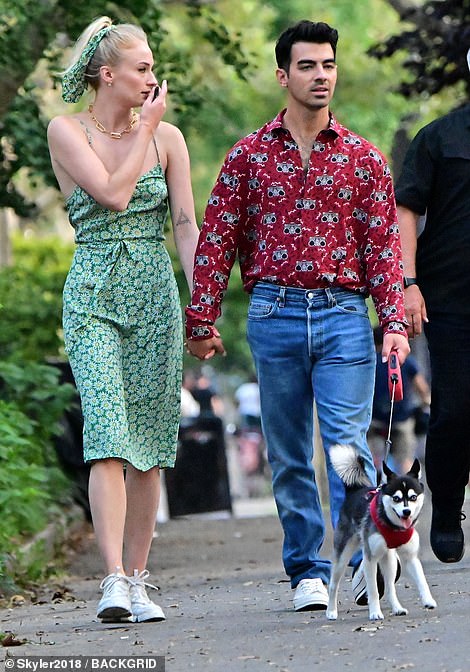 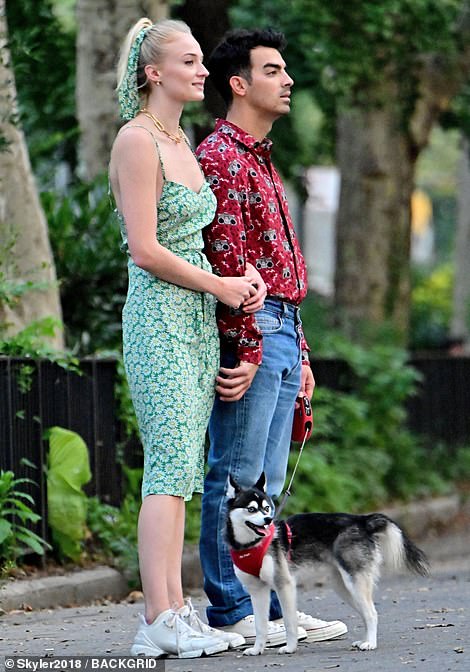 Pet parents: Joe originally bought Porky (pictured above) as a surprise for Sophie and the couple adopted Waldo from the same litter when they wanted to add to their brood 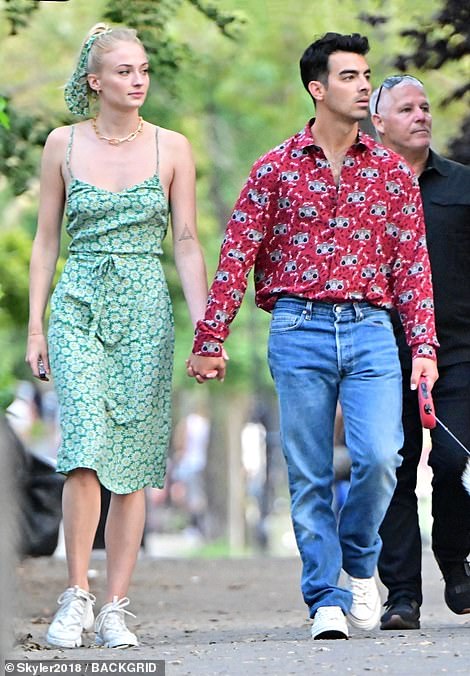 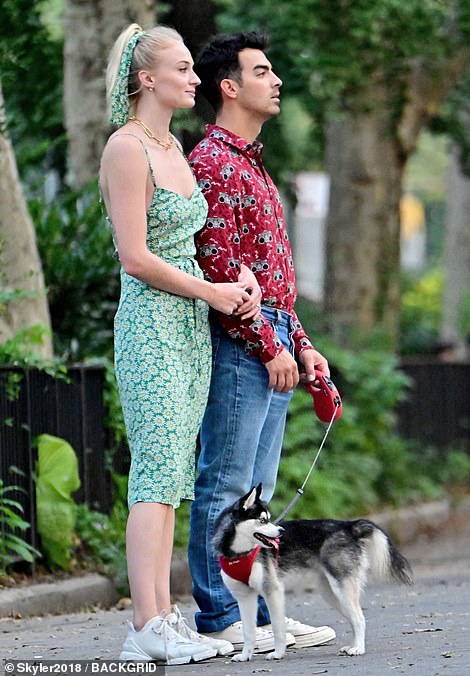 Reflecting: Sophie and Joe filed a police report for Waldo’s death on Friday, telling police they decided to delay contacted the authorities

Sophie and Joe have been together since late 2016; the pair met through mutual friends and kicked things off by DMing each other. They got engaged in 2017, a year after their first date.

The star later told Harper’s Bazaar: ‘We had a lot of mutual friends and they’d been trying to introduce us for a long time.

‘We were following each other on Instagram and he direct messaged me one fine day, out of the blue.’

Rumours that they were an item first swirled when they were seen cosying up at the MTV EMAs in November 2016, pictured on several occasions afterwards at various other events. 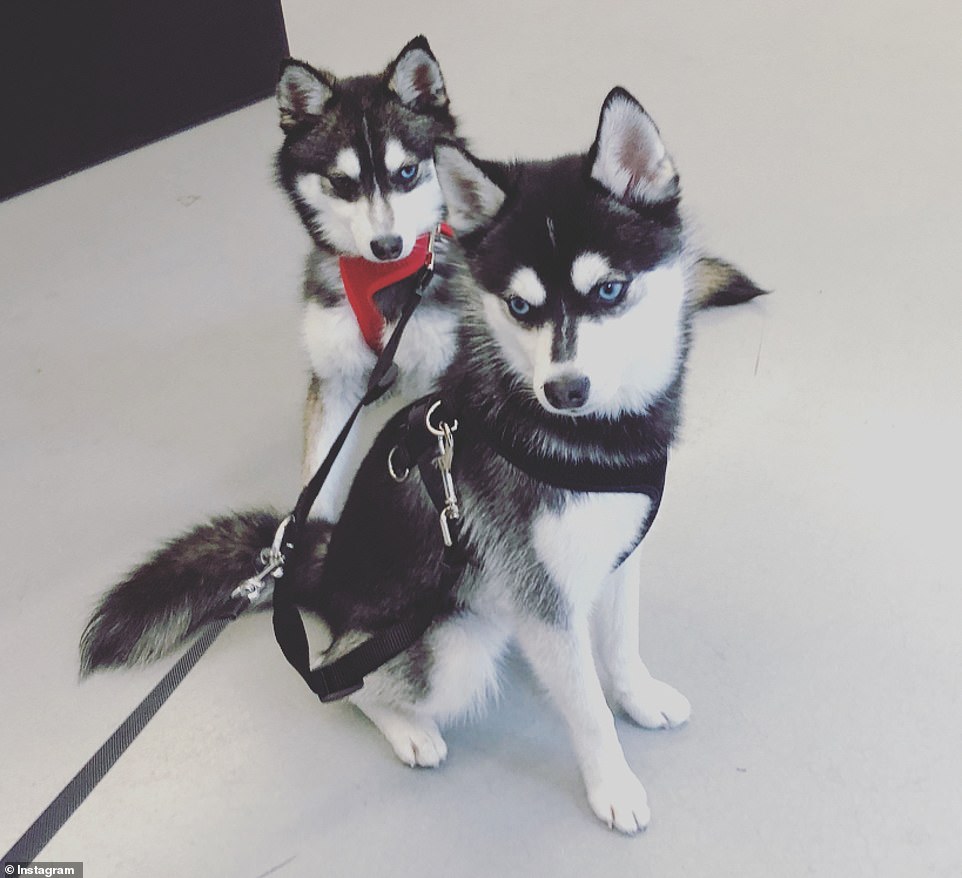 Pets: Sophie and Joe originally adopted Waldo back in April 2018, and also still have their surviving dog Porky from the same litter 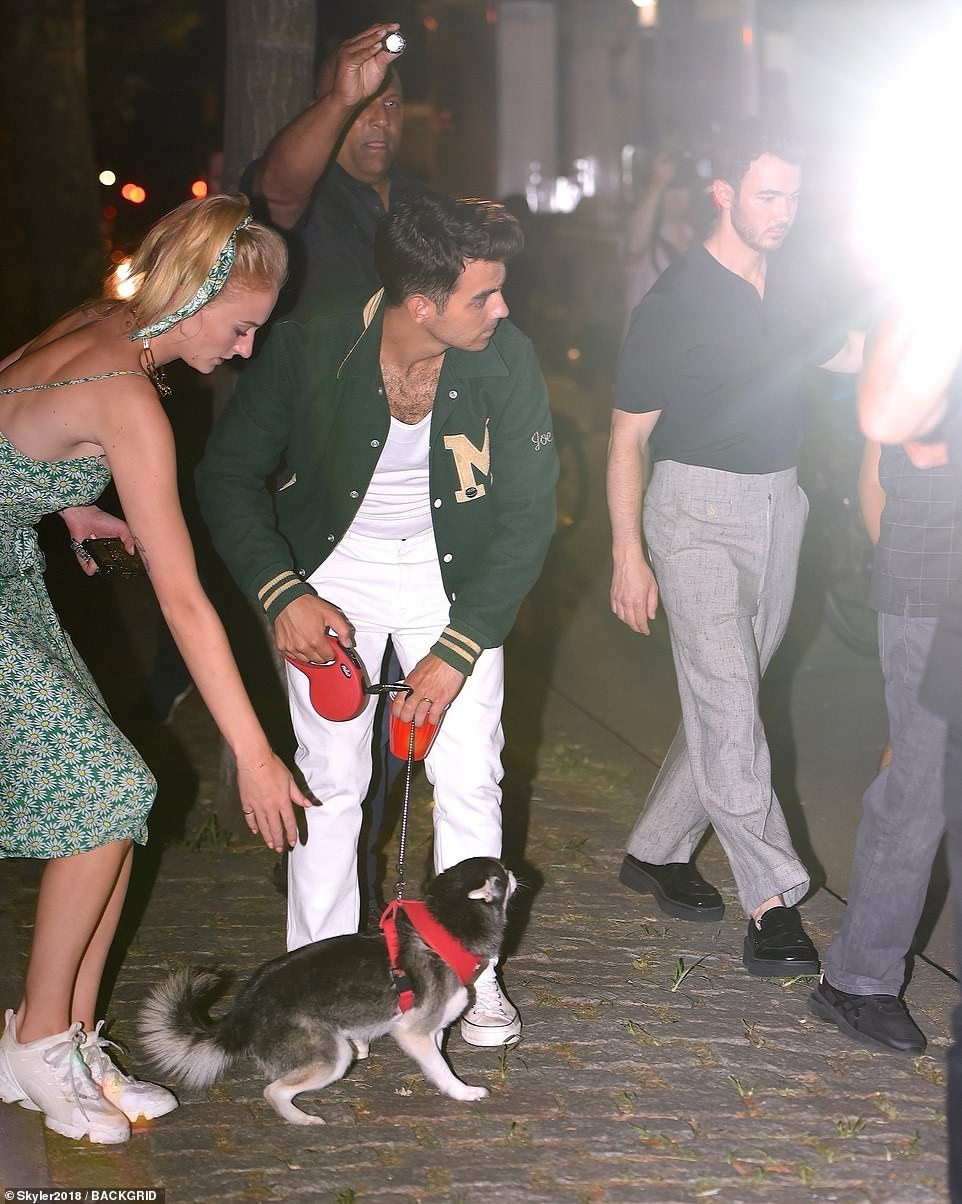 Family support: Later and Sophie were also seen out and about with brother Kevin as they stepped out after Waldo’s death