Style Alert: Vote for Your Favorite Look From the 2019 SAG Awards 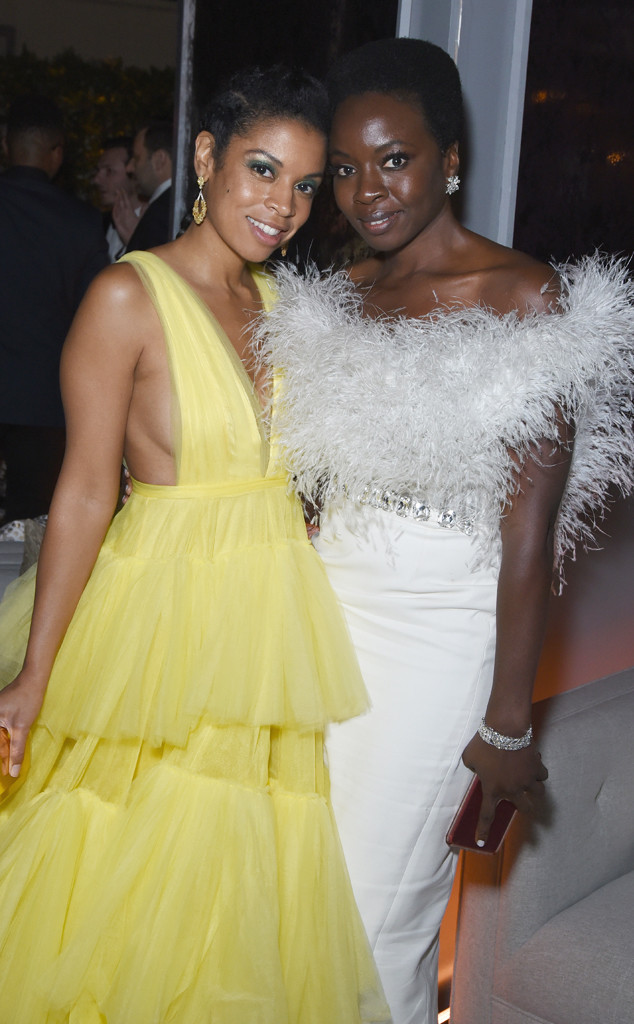 When it comes to award shows we always hope celebrities will bring their fashion A-game, and when it came to the 2019 Screen Actors Guild Awards the stars did just that.

On Sunday, celebrities arrived in Los Angeles to celebrate the 25th Annual SAG Awards and their style was on point. In addition to celebrating big wins for The Marvelous Mrs. Maisel, This Is Us and Black Panther, fans tuned in to see what their favorite actors and actresses were rocking on the carpet and we were not disappointed.

Who slayed the red carpet this year you ask? Well, there were 10 serious style standouts to us and we’re still in awe of some of their gorgeous looks.

This Is Us stars Mandy Moore and Susan Kelechi Watson for starters were absolute bombshells. Moore donned a black Jason Wu gown with silver shimmer on top while Watson wore a custom yellow tiered gown by Christian Siriano, which we are still oohing and aahing over.

Danai Gurira was another standout for us with her Ralph & Russo white, feathered gown and Bulgari jewelry.

The GLOW star showed up in a black Miu Miu gown complete with bow wings and the A Star Is Born actresses donned a Dior Haute Couture white dress that we can’t help but love.

Yara Shahidi was stunning as well in a pink sequin jumpsuit and sheer overlay dress by Fendi Couture that was to die for. It was youthful and sassy and so fierce.

SAG Awards host Megan Mullally made a statement in a chic black gown with gold embellishment while Crazy Rich Asians star Fiona Xie went for a pastel look that makes us wish it was spring already.

The boys also dressed to impress on the red carpet this year with both Anthony Ramos and Chris Pine stealing the show.

The A Star Is Born actor wore a David Hart tuxedo with Noah Waxman shoes to create the vintage look of our dreams. Pine on the other hand rocked a white suit by Zegna with Christian Louboutin loafers that screamed old Hollywood.

To see all of the best looks from the 2019 SAG Awards keep scrolling.

Don’t forget to vote for which of the top 10 looks you think deserved an award of its own below!

For more style and entertainment news from the SAG Awards tune into E! News tonight at 7 p.m. on E!

Jason Wu outdid himself with this sexy and sleek number and of course Mandy Moore looked flawless wearing it.

The Black Panther star dazzled in this feather-filled white gown by Ralph & Russo with Bulgari jewels and we’re not worthy.

The This Is Us star donned a gorgeous yellow, tulle tiered ballgown fit for a queen on the red carpet.

The Grace and Frankie star made us do a double take with this saucy red, sequinned frock.

Who doesn’t love a good bow? We sure do, especially paired with this sleek Miu Miu dress silhouette and pulled-back ‘do.

The SAG Awards nominee really took the show’s silver anniversary to heart with his jacket choice and we salute him.

A style star has definitely been born with Lady Gaga who slayed the red carpet in Dior Haute Couture and Tiffany Blue Book Collection accessories.

Look who’s all grown up! We are in awe of Yara Shahidi in this Fendi Couture pink, sparkle jumpsuit and sheer tulle overlay. PS: We see those Cartier jewels and we love them.

The 2019 SAG Awards host was dressed to kill in this black number with gold embellishment.

The star is already a winner at the 2019 SAG Awards thanks to this dapper black tuxedo with green, vintage-printed design by David Hart with Noah Waxman shoes.

Tiered perfection and silver glow brought to you by Liberty Belle, err, we mean Betty Gilpin.

The Crazy Rich Asians star wore a beautiful tulle gown with pastel colors and flowers on the bodice that we can’t help but love.

The GLOW star stunned in a feminine and fierce red gown from Sandra Mansour’s Fall 2018 collection. Plus, her crystal-adorned pony clutch was to die for.