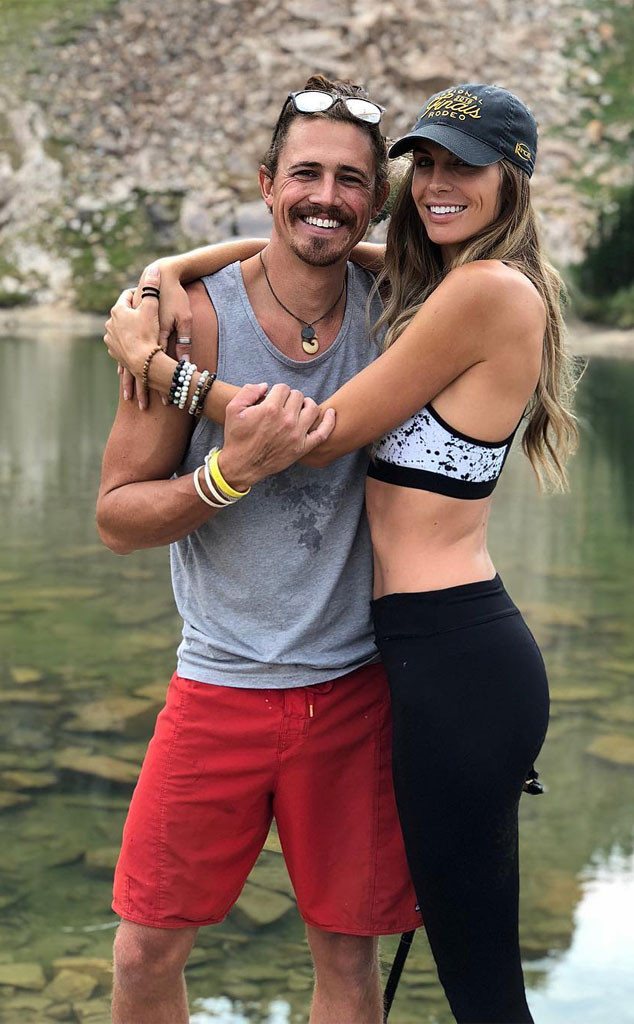 Outwit. Outplay. Outlast. Out I do.

Survivor competitors Joe Anglim and Sierra Dawn Thomas announced their engagement on Tuesday. These two CBS all-stars go way back to 2014 when they first locked eyes on the sandy beaches of Nicaragua during Survivor: Worlds Apart, although they didn’t start dating immediately after the show.

Both Anglim and Thomas posted about the joyous news on social media. Thomas’ photo showed the beautiful teardrop diamond on her perfectly painted yellow fingernails.

“Forever and ever, amen,” she captioned it.

Anglim’s snapshot showed him and his signature man bun kissing his newly minted fiancée’s hand with the ring on full display.

According to People, the proposal was a complete and total surprise.

32-year-old Thomas explained to the magazine that they were on their way back from Anglim’s sister’s wedding in Arizona and made a pit-stop in Utah to camp for the evening.

“We pulled in just as the sun was setting, and we decided to go for a little walk. We found the perfect swinging chair facing the mountains and the most beautiful sunset. There were even some deer running across a dirt road!” she told People.

After sitting down and popping open a bottle of bottle of rosé, Anglim apparently started professing his love nonstop but she didn’t think anything of it.

“He was explaining his love for me, and I would say, ‘Yeah, baby. I love you too!'” Thomas said.

She continued, “But then he got off the swing, reached into his coat, and got on one knee. It finally hit me what he was doing. I started crying, and he started crying! We were both crying.” Thus, she was given a teardrop sparkler and accepted his romantic proposal.

Thomas told the magazine that she had “no idea” he would propose but that they’re “going to live happily ever after!”

Both Thomas and Anglim have competed on multiple seasons of the reality show, which is now in its 38th season. This moment is a bit meta for Survivor fans. Anglim vied for the win on Survivor: Cambodia—Second Chance in 2015, and he’s also on the current season of Edge of Extinction.

Thomas made her strategic moves on Survivor: Game Changers as well.

Neith Anglim nor Thomas won their respective seasons (well, Edge of Extinction is TBD), but it’s clear that their love has outlived any competition.

Check out the gallery below to see a status check on some of your favorite Survivor couples.

These Survivor: Ghost Island contestants are so intertwined they started a vlog and a couples Instagram account: Tarzan and Jen.

Parvati Shallow, a participant on multiple iterations of Survivor, started dating John Fincher of Survivor: Samoa in 2014. They married in 2017 and welcomed a daughter in 2018.

This pair from 2011’s Survivor: South Pacific had almost instant sparks. Their relationship took them on The Amazing Race together, and they wed in 2014.

After production on Survivor: Vanuatu wrapped, Probst, the longtime host of the CBS series, reached out to Berry. The two started dating, but kept the relationship a secret until after Berry’s season aired. They were together for a few years, but eventually split.

Oh, Boston Rob and Amber. These two took showmance to the next level. They met in 2003 while on Survivor: All-Stars, got engaged in 2004, and had a TV wedding in 2005. They competed on The Amazing Race in season seven and returned for The Amazing Race: All-Stars in 2007. They have three kids.

The couple were introduced by Johnny Fairplay and were engaged, but the relationship didn’t last.

Todd Herzog, the winner of Survivor: China, met Survivor: Tocantins contestant Spencer Duhm in 2009. The couple eventually split, and Herzog later appeared on Dr. Phil for an intervention with his alcohol addiction.

Courtney Yates of Survivor: China and Stephen Fishbach of Survivor: Tocantins never competed on the series together, but met in 2009 and struck up a romantic relationship, but it didn’t last. Fishbach got married in 2018.

These two Survivor winners met during the finale of Survivor: The Amazon. They started dating in 2003 and were together for 10 years, even appearing on The Amazing Race.

“It is with much consideration and a heavy heart that we are announcing that after 10 years of a loving relationship, the decision was made to move on without each other,” a rep for the couple told E! News in 2013. “We will carry with us the memories of a relationship grounded in love, laughter, support and friendship.”

“We have experienced some of life’s greatest joys and toughest challenges together, and our decision to be apart can never diminish that. We want to thank everyone for their support and we ask that our privacy be respected as we move forward.” Ethan Zohn is now married.

The Survivor: China contestants met on the show in 2007 during the competition. They married two years later.

After competing on Season 37 or Survivor: David vs. Goliah, the two contestants formed a romantic relationship that continues today in San Diego, Calif. “We shared so much chemistry and friendship on the island,” Kara explained to E! News. “And then we got home and we both knew.”

These two Survivor lovebirds met in 2014 during Worlds Apart. Although they didn’t start dating immediately after the show, they became a couple a few years later and announced their engagement on April 9, 2019.

This Survivor couple has formed an alliance that is going all the way to the end.