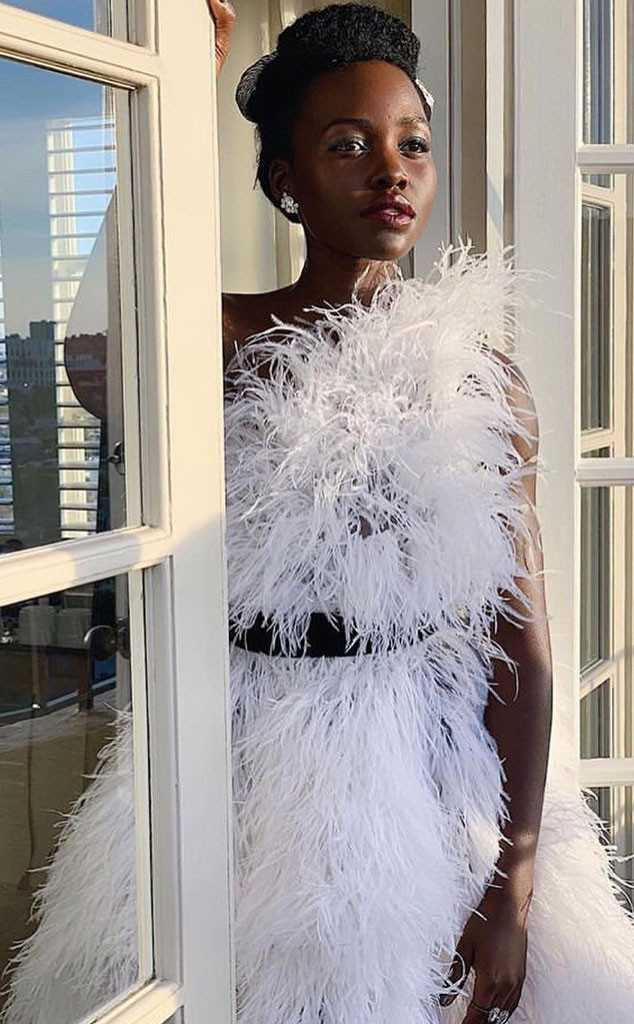 The Black Panther star turns 36 years old today and we love a good reason to grab some bubbly and eat some cake, so why not do both to celebrate Nyong’o’s day? It sounds like a win-win to us.

Over the years, we’ve grown accustomed to seeing the Us star on red carpets wearing glamorous and stylish ensembles and that’s why we wanted to shine a light on the actress’s style on her birthday. It seems fitting, right?

With so much style and grace no matter where she’s going, Nyong’o has become a fashion “It Girl” in addition to a mega star over the past decade or so and we bow down to her fashionable wardrobe choices today and every day.

She had some stunning costumes in Black Panther, but her red carpet looks really go above and beyond, not to mention her Fashion Week looks that she dawns from year to year.

The 12 Years a Slave actress knows what looks good on her and she isn’t afraid to work a red carpet every now and then.

No matter what she puts on she looks fierce and fabulous and that’s why she is our go-to muse for fun and fancy wardrobe inspiration.

Even if you don’t have a Hollywood party to attend anytime soon, Nyong’o’s style will give you life and that’s exactly what we all need to make our Friday brighter.

Now that she’s about to appear in Jordan Peele’s Us, which comes out this month, we’re going to be getting a lot more ensemble power moments, which is so exciting.

Until she hits another carpet or premiere, we will honor of her and the fact that she made it another year around the sun with our favorite photos of the star.

Prepare for some serious fashion envy as we raise a glass to the birthday girl while scrolling through her best looks of all time below.

Lupita Nyong’o was light as a feather as she attended the 2019 Vanity Fair Oscars party wearing this Oscar de la Renta one-shoulder gown.

The Kenyan-Mexican actress donned a golden power suit-inspired dress by Chanel as she partied ahead of the Oscars.

The 36-year-old star was pretty in pink while attending a pre-Oscars bash with Vanity Fair and Lancome.

The Us actress gave major boss-vibes in this Versace gold puffer jacket.

Lupita wears a custom Vera Wang ensemble, pairing a structured blazer with a sheer jeweled skirt. She completes the look with feathered braids.

Black Panther‘s Lupita stuns on the red carpet in a Calvin Klein dress. This shining star never ceases to amaze us!

Lupita pays homage to the Roaring Twenties in a fringed Tom Ford gown and teardrop earrings.

For the Versace Fall 2019 fashion show, the Black Panther star goes bold and bright with a T-shirt, cardigan, skirt and heels of the same pop art-inspired print.

The actress dons the popular power suit, but opts for an all-white look with silver shoes to stand out.

The actress was fierce in a glamorous see-though Prada number, paired with a brown bodycon dress.

Pretty as A Peach

The actress stuns in this timeless Giorgio Armani gown embellished with sparkling jewels and plunging neckline.

Lupita shows off a little skin in a gorgeous Dior Haute Couture gown.

It’s definitely not every day you see someone wearing a dress covered in bananas, but Lupita makes the Prada dress look timeless.

The Black Panther star wore a show-stopping purple Atelier Versace dress with an embellished bodice for the world premiere of Black Panther.

The actress looks strikingly similar to the Oscar Statuette in a golden Atelier Versace for the 90th Annual Academy Awards.

Light as a Feather

The Black Panther actress sauntered down the red carpet at the 2018 SAG Awards in a Ralph and Russo gown.

The stunning actress turned heads in a glittering green Halpern dress at the premiere of Star Wars: The Last Jedi.

This striped jumpsuit the actress wore while promoting Star Wars: The Force Awakens flatters her in every way. The vertical stripes elongate her legs while the horizontal ones give her more shape up top.

The 12 Years a Slave star proved a simple satin dress will go far, especially when a few ruffle details flow down.

Orange may be a hard color to pull off, but the Star Wars actress can do no wrong in the hue. See: her 2017 Met Gala Prada dress for evidence.

Lupita turned heads in purple Elie Saab and a matching head wrap on a Queen of Katwe red carpet.

This fresh ensemble is ready for any daytime occasion. Just throw on a white pleated dress, a red lip and some super-cool, black-out Dior sunglasses.

The A-list actress looked like a glam mermaid in Calvin Klein at the 2016 Met Gala.

Look at Her Glow

Lupita is a glowing goddess in this silver, light-reflecting sequin Prada dress.

All eyes were on Lupita as she donned a bright green Gucci gown at the premiere of La Tete Haute during the 68th annual Cannes Film Festival.

The actress looked statuesque in this classic gold Calvin Klein dress as she attended the 2015 Vanity Fair Oscar Party.

Lupita looks like a million bucks in a form-fitting sequin, white Calvin Klein dress for the Oscars.

Vibrant colors and a train, this Elie Saab piece looks stunning on the star as she attended the 21st Annual Screen Actors Guild Awards.

Lupita looked pretty as a flower in this floral statement Giambattista Valli piece at the 72nd Annual Golden Globes Awards.

Lupita looking classic chic in this sophisticated Kurt Geiger dress for the Glamour 2014 Women of the Year Awards.

The star looked like a piece of art in this statement Chanel piece for the 2014 MTV Movie Awards.

The Academy Award winner went for a princess look in this blue Prada gown as she accepts an Academy Award for Best Supporting Actress. 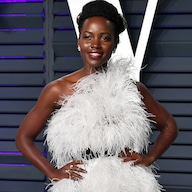