The 2019 Golden Globes Red Carpet Was on Fire: Which Celeb Earned Your Best Dressed Vote?

On Sunday, stars from both the film and television industries descended upon the Beverly Hilton Hotel for the 2019 Golden Globe Awards and proved that 2019 is going to be a year to remember.

As celebrities and fans gathered to watch Brooklyn Nine-Nine’s Andy Samberg and Killing Eve’s Sandra Oh host this year’s show, who took home the night’s biggest awards wasn’t all that was on their minds. Sure, Bohemian Rhapsody winning Best Motion Picture — Drama and Oh taking home the trophy for Best Performance by an Actress in a Television Series — Drama was a very exciting thing to see, but there was one other big thing we were all talking about…fashion.

Every year fans watch with baited breath to see which stars slay the red carpet at award shows and the Golden Globes really took the heat up a notch when it came to style and jaw-dropping looks.

Celebrities including, Saoirse Ronan in a shimmering Gucci gown and Chopard jewels and Timothée Chalamet in head-to-toe Versace (complete with a harness) and Cartier accessories for example, caught our attention from the moment they hit the carpet.

Halle Berry (in a wine colored Zuhair Murad gown) and Lady Gaga (in custom lavender Valentino) also made us stop and stare, because let’s be honest they looked so freaking stunning.

Julia Roberts on the other hand was wearing a show-stopping number we won’t soon forget. The Homecoming actress rocked a nude top with a long train and sleek black pants (and Chopard jewels) for a chic ensemble we’re still obsessing over.

Mary Poppins Returns star Emily Blunt donned a silver lace gown, while Crazy Rich Asians star Gemma Chan rocked a dress that actually had shorts underneath that were exposed when she moved throughout the night and added to her edgy look with Essie’s Wicked polish. It was ah-mazing. 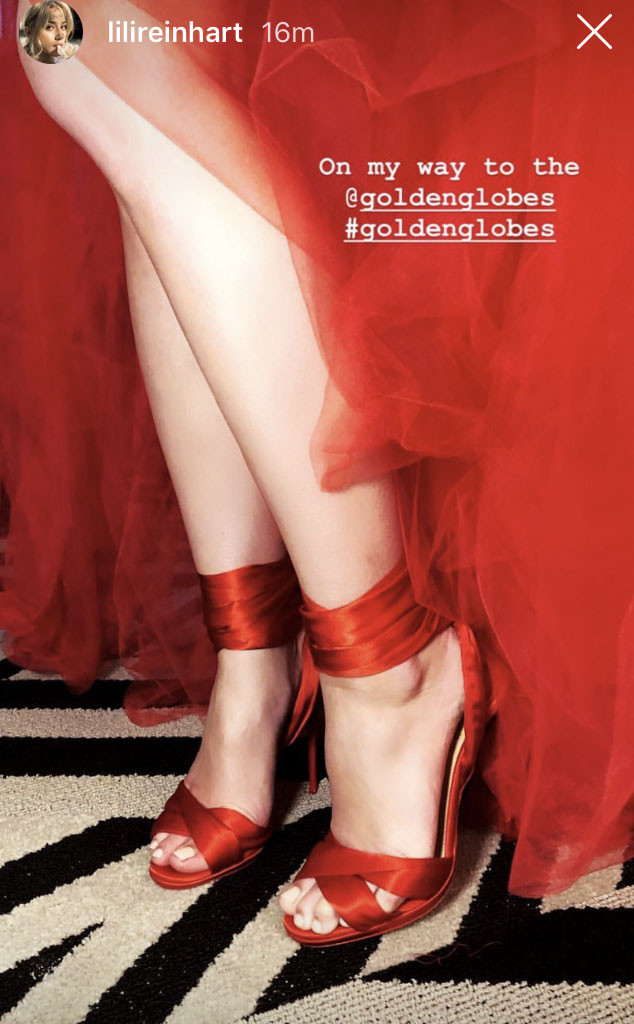 Of course we can’t forget Emmy Rossum, who wore a gorgeous pink tulle Monique Lhuillier gown that was fit for a princess. Golden Globes winner Regina King also caught our eye when she donned a sparkly, form-fitting pink frock by Alberta Ferretti that was to die for.

There were a lot more impeccably dressed stars that showed up at the 2019 Golden Globes, but these nine women and one dapper dude were definitely our favorites.

The question is, which one has your vote for best dressed?

Sound off in our poll below on which gorgeous gown or ensemble still stands out in your mind from last night’s award show. Then, start pinning things to your mood board on how to recreate the epic look and somehow incorporate it into your daily style ASAP. You know you want to!

For more fashion and celebrity news from the 2019 Golden Globes make sure to tune into E! News tonight at 7 p.m. on E!

(E! and NBC are both part of the NBCUniversal family).

The star is stunning in Gucci dress and Chopard jewelry.

The actor is winning with a Louis Vuitton all-black ensemble, featuring a harness that we couldn’t stop talking about.

The star’s Michael Kors Collection dress is amazing, but the actress takes it to the next level with a silver circular purse.

The Black Panther actress dress is fire, as is her Fred Leighton jewelry.

The star ages like fine wine. Every award season, her looks gets better. Case in point: this Zuhair Murad gown with Roberto Coin jewelry.

The stars stuns in lavender from head to toe, wearing custom Valentino.

The actress is as stunning as ever in a pale pink Zuhair Murad gown.

The Homecoming actress stuns with a nude top with a long train, black pants that have been tailored to perfection and Chopard jewelry.

The actress is a beauty in a two-toned gown with a large neck bow from Dior with Bvlgari jewels.

This silver lace number with an asymmetrical hem is a stunning number on the star.

The star is a crazy-rich in style in a nude-toned gown with an orange velvet belt.

The Crazy Rich Asians is wearing shorts on the red carpet, yet this ensemble is so awing that we almost didn’t notice.

You could not miss The Americans star in her silver sequined dress with a plunging neckline.

The actress is stunning in a Ralph & Russo gown with velvet straps.

Pretty in pink, the actress is a sight to see in Monique Lhuillier on the red carpet.

The actress is gorgeous in a black dress with a full skirt and Tamara Mellon heels.

This form-fitting Alberta Ferretti dress is a winner on the red carpet.

The actress stuns in a classic, silver-toned gown from Armani Prive, a statement necklace, paired with a red lip.

This star is ravishing in a Khyeli red, tulle gown with matching eye makeup and Swarovski earrings.

In a gown with a plunging neckline, embellished neckline and sequined skirt, the BlacKkKlansman is as flawless as ever.

The E! News host is perfection in a white gown with a silver, embellished neckline.

The former Grey’s Anatomy star perfects Hollywood glamour with a white gown with ruching along one shoulder.

The red carpet star shines bright in a metallic gown with sheer detailing.

The sheer neckline on this button-up shirt transforms this all-black outfit into a red carpet-worthy style.

The If Beale Street Could Talk actress appears in a princess-worthy gown, featuring a caged bodice.

The TV host is angelic on the red carpet in a white dress with bell sleeves, a high slit and plunging neckline.