The Goldfinch slammed by negative reviews and tweets after TIFF debut

‘It was so bland and boring’: Critics dub The Goldfinch a ‘disaster’ and a ‘vapid prestige picture’ in a series of scathing first reviews – leaving fans of the novel devastated

Fans of Donna Tartt’s Pulitzer Prize-winning novel, The Goldfinch, are devastated to learn the highly-anticipated movie adaption is being mercilessly skewered by critics who have called it everything from ‘lifeless’ to a ‘vapid prestige picture.’

Directed by John Crowley, the film stars Ansel Elgort as Theodore Decker, a young man who is led into the world of art forgery after his mother is killed in a bombing at the Metropolitan Museum of Art.

The Goldfinch premiered at the Toronto International Film Festival (TIFF) on Sunday, and the largely negative first reviews have many dubbing it one of the biggest disappointments of the year. 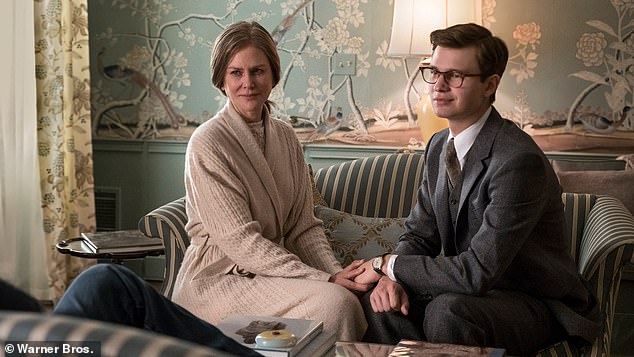 Yikes: The Goldfinch, starring Nicole Kidman and Ansel Elgort, is being slammed by critics. The film is based on Donna Tartt’s 2013 Pulitzer Prize-winning novel of the same name 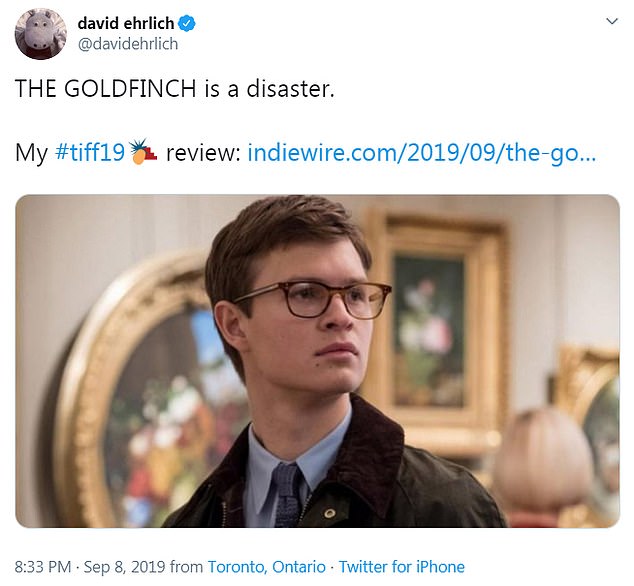 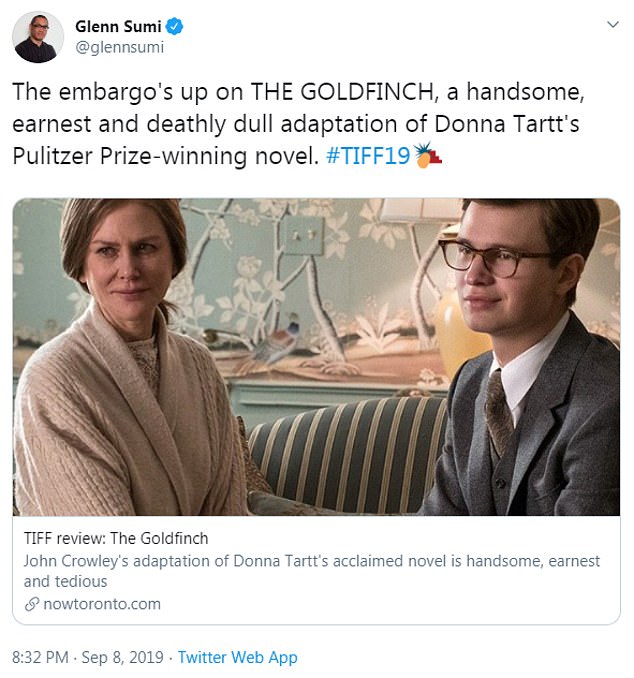 Not a fan: Many critics agreed that the attempt to adapt Tartt’s 784-page novel into a two-hour-and-30-minute movie has led to a film that is as dull as it is lengthy

Nicole Kidman, Jeffrey Wright, Finn Wolfhard, Sarah Paulson, and Luke Wilson all have supporting roles in the movie, but even the A-list cast couldn’t save it from being panned.

Indiewire’s chief film critic David Ehrlich and The Globe and Mail’s film editor Barry Hertz both took to Twitter to call the movie a ‘disaster.’

In Ehrlich’s review, he went on to say The Goldfinch is ‘a lifeless film that doesn’t consist of scenes so much as it does an awkward jumble of other, smaller problems stacked on top of each other like kids inside a trench coat.’

‘A movie as inert as the famous oil painting it is titled for. John Crowley’s listless direction and a cast — led by Ansel Elgort and Nicole Kidman — that is apparently afflicted with narcolepsy make this the first big bomb of TIFF 2019,’ he wrote, adding: ‘Some books were never meant to be movies.’

Many critics agreed that the attempt to adapt Tartt’s 784-page novel into a two-hour-and-30-minute movie has led to a film that is as dull as it is lengthy.

‘THE GOLDFINCH was so bland and boring, I just. I really can’t say much other than nothing happens for almost 2 hrs,’ tweeted critic Yolanda Machado.

In the Collider’s review of the film, critic Matt Goldberg gave it an F, calling it a ‘tedious chore’ and a ‘vapid prestige picture’ as well as a ‘cold, heartless, sterile look at survivor’s guilt in the face of senseless tragedy.’

Todd McCarthy, a critic for The Hollywood Reporter, argued the novel would have been better suited as a longform miniseries rather than a movie, calling it ‘a disappointing adaptation of a great book.’

‘That’s the long and the short of the problem with this nicely cast, impeccably decked-out production that simply doesn’t have the room or time to properly accommodate the piece’s plot and multitude of milieux and characters,’ he wrote.

‘Unlike the tiny painting that gave the book its name, the movie deserves a more expansive canvas.’ 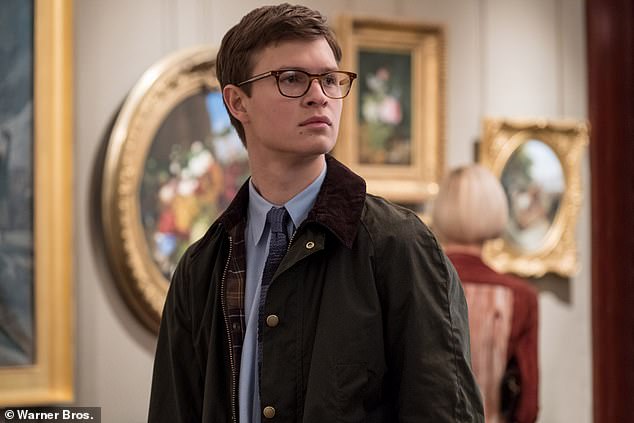 Silver lining: Despite the largely negative reviews, some audience members said they enjoyed the film, and fans of the book insisted they are still going to see it 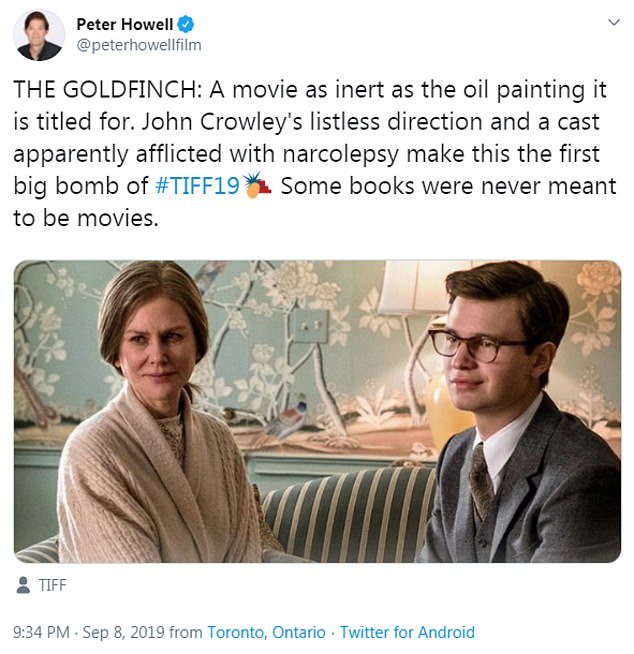 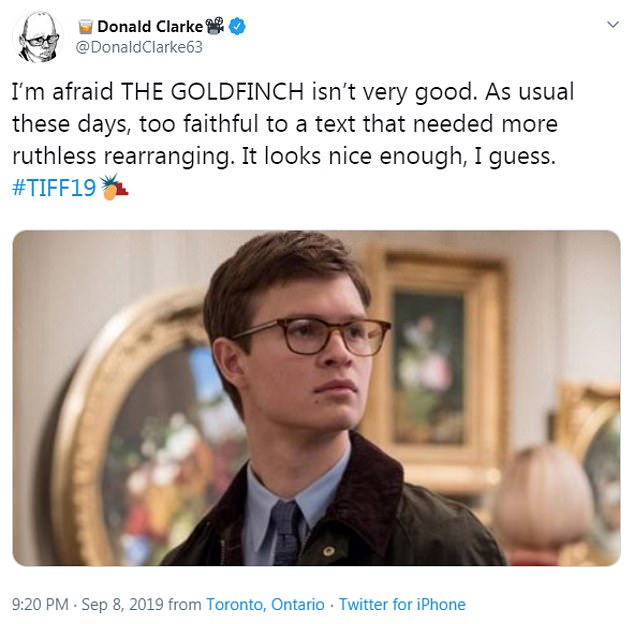 Amid the criticism, there was praise for the film’s actors doing as much as they could with the material they were given.

The Guardian’s Benjamin Lee gave the film three out of five stars and lauded Elgort for ‘quietly anchoring an uneven film.’

He also commended The Goldfinch for featuring ‘another strong performance from an on-a-roll Kidman’ and ‘reliably strong character work from Jeffrey Wright.’

Adam B. Vary from BuzzFeed News tweeted that the film is ‘gorgeous and airless,’ but he also found the actors’ performances the movie’s most redeeming quality.

‘The actors all do what they can, and some — Finn Wolfhard, Sarah Paulson — manage to shake the film out of its chilly self-consciousness,’ he wrote.

The Goldfinch currently has a 30 per cent rating on Rotten Tomatoes, which is actually a bump up from the 29 per cent it previously had. 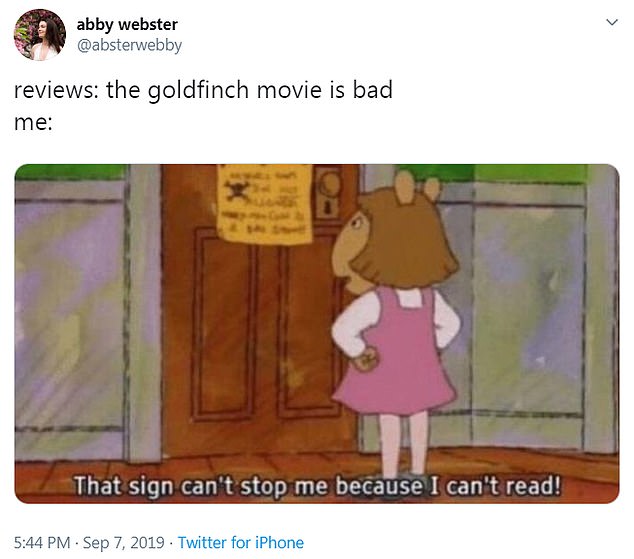 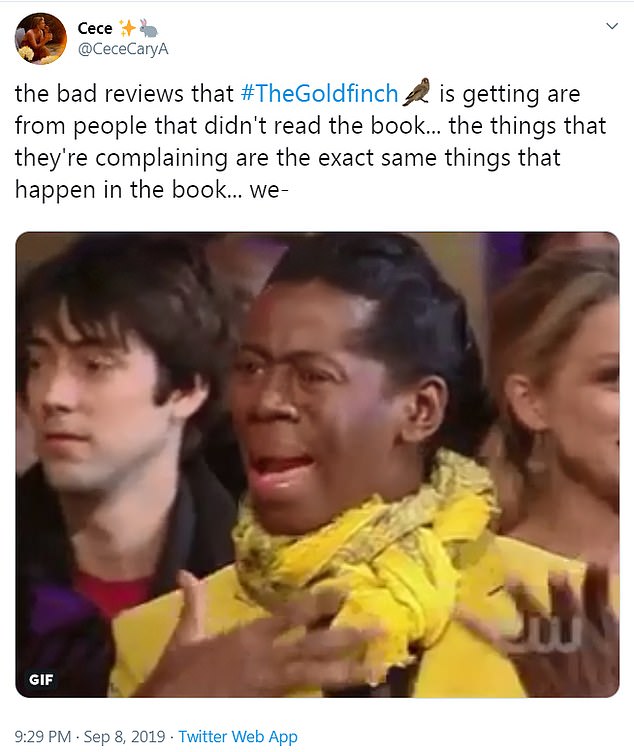 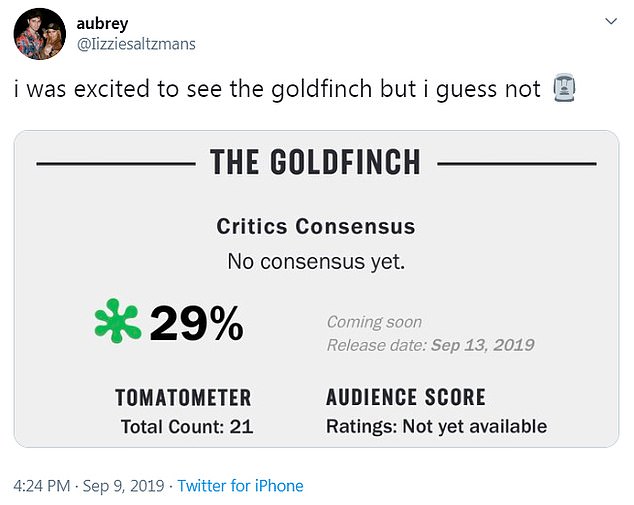 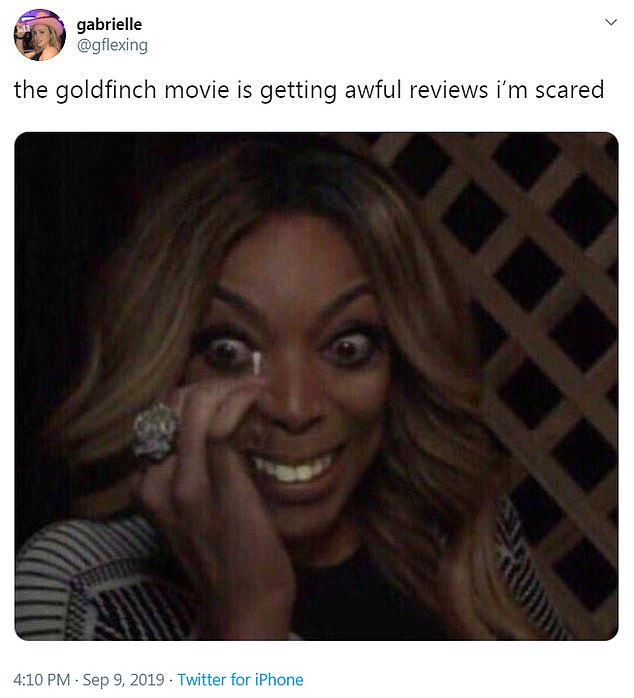 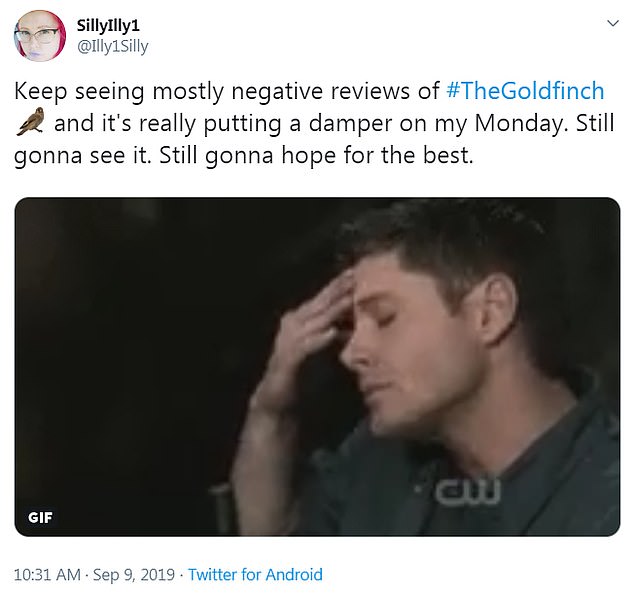 And despite all the criticism, there were audience members who insisted they enjoyed the film.

‘I saw #TheGoldfinch last night and I don’t care what the rest of you say; it was thoughtful, moving, and wasn’t a Marvel movie,’ Laurie Petrou wrote.

The Goldfinch hits theaters on Friday, and whether or not it will be a blockbuster success remains unclear, though it seems unlikely.

Some Twitter users admitted they are wary to go see The Goldfinch following its dismal reviews, while others insisted they have to see it for themselves.

‘Keep seeing mostly negative reviews of #TheGoldfinch and it’s really putting a damper on my Monday,’ one person tweeted. ‘Still gonna see it. Still gonna hope for the best.’ 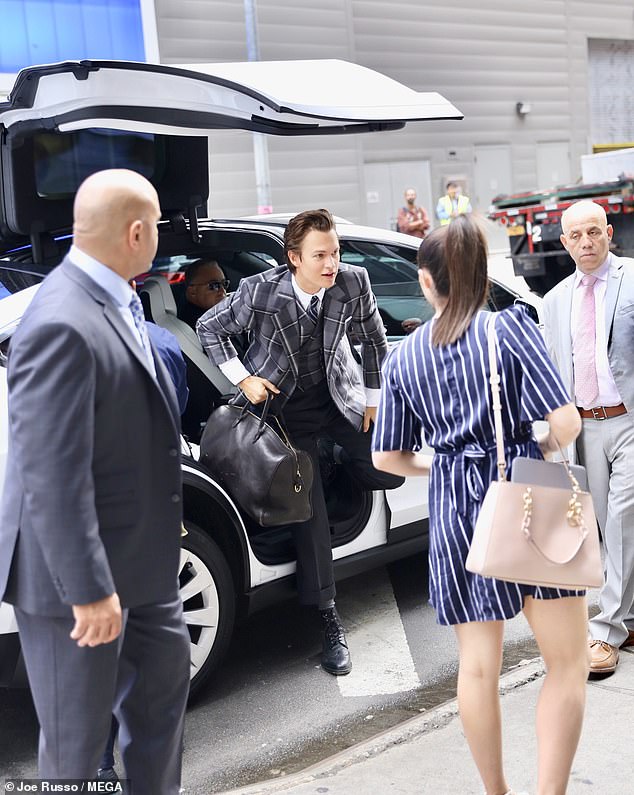 Making a run for it: Elgort, 25, was spotted arriving at the Good Morning America studios in New York City on Monday following the harsh first reviews 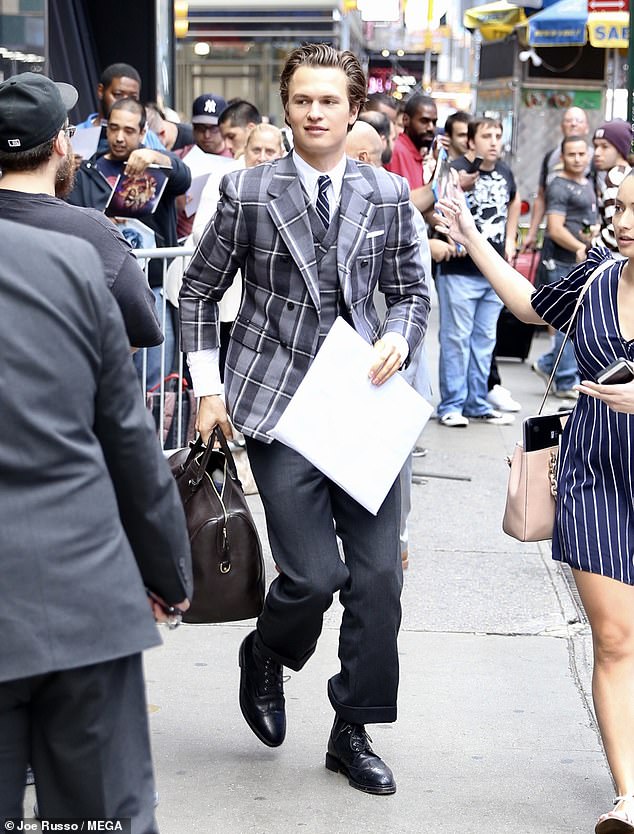 Check him out: The actor looked dapper in a gray plaid jacket and a matching vest, which he paired with a striped tie and dark gray trousers 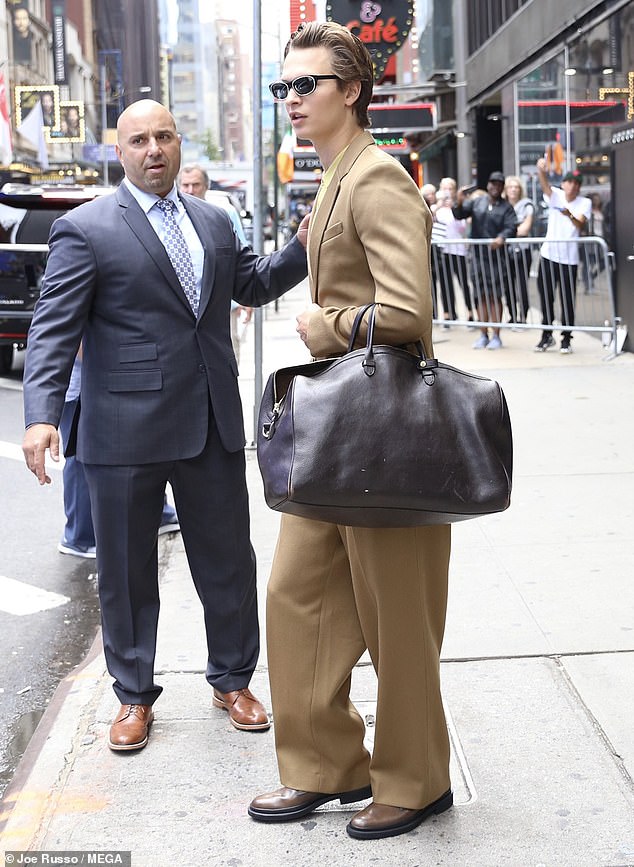 Someone else commented: ‘Currently reading the four positive reviews of The Goldfinch and ignoring the rest.’

A few people seemed pleased that the film was panned because they no longer felt pressured to go see it.

‘Relieved that The Goldfinch movie is apparently so bad I don’t have to pretend to talk myself out of seeing it,’ Zack Handlen tweeted.

Following the release of the harsh first reviews, Elgort was spotted arriving at the Good Morning America studios in New York City on Monday to talk up the movie with co-star Ashleigh Cummings.

The 25-year-old actor jumped out of a limo with gull-wing doors and rushed into the building wearing a plaid jacket over a white shirt and a matching vest.

By the time he appeared on screen, he had changed into a beige suit with wide-legged pants and a yellow polo shirt.

Host Michael Strahan asked about The Goldfinch but didn’t mention its poor reception at TIFF.