Why Chilling Adventures of Sabrina's Time Period Is So Vague

While the show claims it’s set “this year” and features laptops and cell phones, it’s also a fan of old fashioned cars, landline phones, and everybody working in the mines. The vibe is similar to Riverdale, though Riverdale is actually a lot more contemporary to the point where it was only kind of strange that Cheryl (Madelaine Petsch) openly posted an Instagram story in the most recent episode.

But as we discovered when we hopped on the phone with creator, showrunner, and comics writer Roberto Aguirre-Sacasa, the reasoning for Sabrina‘s slightly confusing time warp goes far past just creating a cool aesthetic.

“We originally were going to set it in the 60s which is when Sabrina first came out in the comic books, and we liked the issues that were going on in the 60s that we felt like we could explore—feminism, civil rights, Charles Manson, Woodstock, first man on the moon,” Aguirre-Sacasa says. “There were certain things we thought would be interesting thematically to have as backdrops.”

A meeting with Netflix exec Cindy Holland made him realize that 2018 was full of plenty of issues to explore within the show, especially in terms of feminism.

“Women’s empowerment, women’s sexuality, women controlling their own bodies, all that stuff is happening now,” the execs told him. “You’re doing that now. We’re having these wars, all these rights are in question today, you don’t need to set it in the ’60s.”

Since Aguirre-Sacasa wanted that retro vibe, Holland encouraged him to “do a retro vibe like you do on Riverdale—timeless.”

While Sabrina is a bit more retro than Riverdale, it’s not without its very current references.

“I jokingly say the only teen that has a cell phone is Harvey,” Aguirre-Sacasa says. “Harvey is very proudly an Apple iPhone owner.” 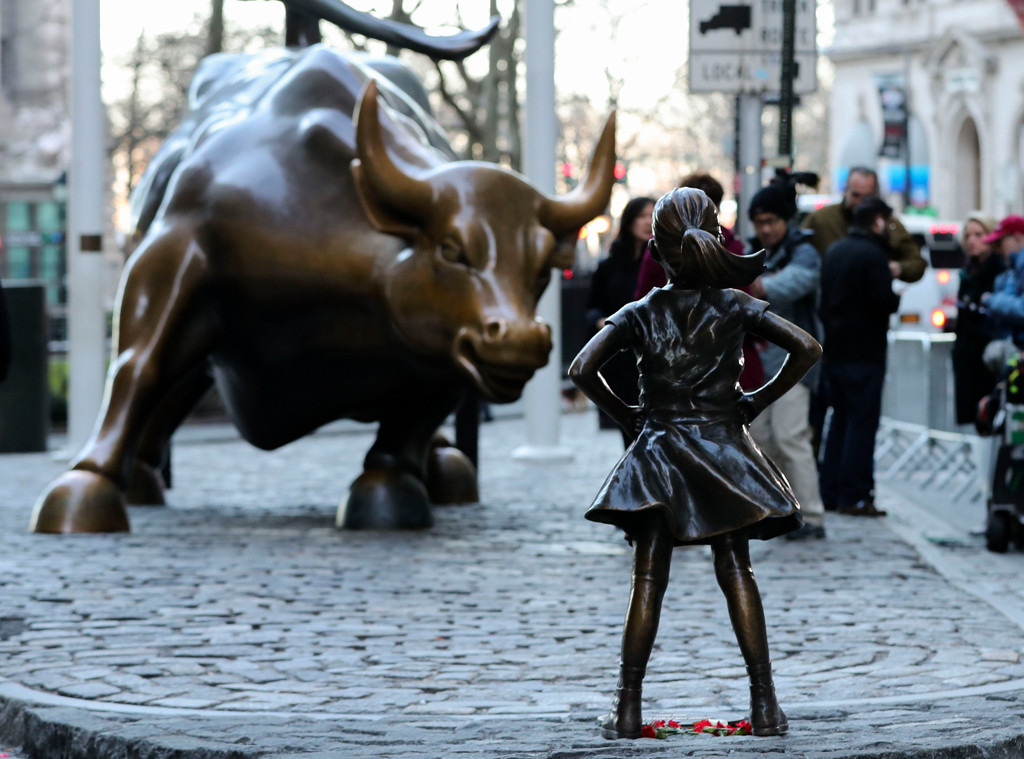 To give the show some even more contemporary context, the inspiration for Sabrina and scenes like the one in episode two where she stands up to Father Blackwood and refuses to sign her name in the book actually comes from a controversy in the art world that went down in early 2017.

“There was a really specific image that when I pitched the show which completely captured the essence of Sabrina which was you know, in New York down on Wall street, there is very famously the wall street bull—the bronze bull. Maybe a year or 2 ago, a statue of a young girl called Fearless Girl was put down on Wall street, and the Fearless Girl was put opposite the bull so it looked like the bull was getting ready to charge, and the girl was in a Superman pose and was standing fearless, and to me that’s what Sabrina was: a young girl unafraid to stand up against this giant evil and the patriarchy as symbolized by the Dark Lord and the high priest and the principle and the football bullies and stuff like that. That was the heart of the pitch. That image. It was all there, it was there from the beginning.”

Fearless Girl went up in March 2017, specifically sized and designed to face off against Charging Bull. Originally, the statue was meant to be temporary as part of a campaign for gender diversity in corporate leadership, but despite some protest from the artist of the Bull, petitions have kept her and the bull in place. They will both soon be moved to a different location, but that image is one that’s hard to forget, and one which Aguirre-Sacasa says was extremely important to him and to Kiernan Shipka.

“You know, when I met with Kiernan early on to talk about the show which was about a year ago, we talked about how she wanted and I wanted the show to be about—as witchcraft often is—female empowerment, and that there was a paradox there, because the women were there and had powers but they ultimately answered to a patriarch, the Dark Lord, and we talked about that. And to me, that paradox is the heart of the show.”

Shipka and Aguirre-Sacasa both wanted Sabrina to be a positive role model for young girls.

“I love characters who fight for the right thing. Sometimes, that can make a character too earnest which sometimes people in Hollywood don’t like, but the fact that we’re taking a witch who practice Satanism and answered to the devil, the fact that she wanted to do right—somehow the balance felt good.”

Chilling Adventures of Sabrina is now streaming on Netflix.