​The Blacklist Season 7 Finale Recap: A Very Animated Liz Chooses A Side 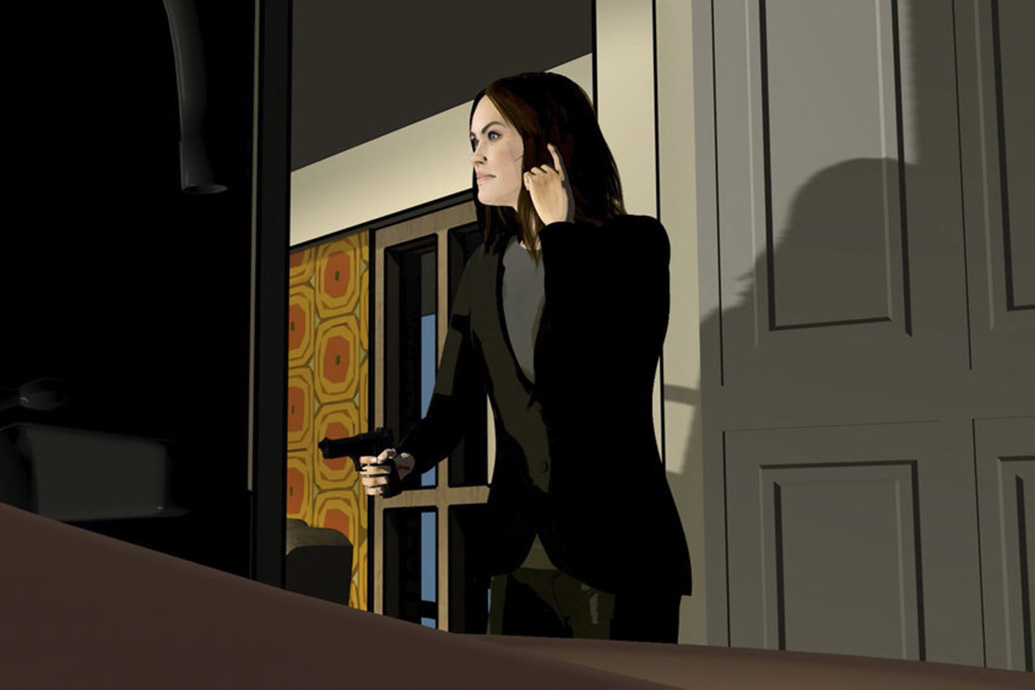 The Blacklist rarely gets credit for its weirdness, but maybe this episode, the Season 7 finale, will be the one to turn the tide. Much has been made (rightfully) about the quarantine-induced decision to complete the half-finished episode with “graphic novel”-style animation and accelerate some of the plot lines to function as a thrilling season finale. But “The Kazanjian Brothers” was also, suddenly, the last episode for Brian Dennehy, who died in mid-April once production had already been shut down. And, of course, the hour had to follow last week’s surreal guest spot from Al Roker.

Given these unfavorable circumstances, the episode was a huge success — and still thoroughly, charmingly strange.

It’s difficult to separate the form from the plot. The episode began with Liz (Megan Boone) at the bedside of Dom (Dennehy), delivering an internal monologue surely recorded from Boone’s most sound-proof closet. That doesn’t happen on this show. Suddenly, the action went inside Harry Lennix‘s home office, where the actor, out of character, explained how the Blacklist team executed this bizarre feat in the midst of a global pandemic. That was followed by a brief montage of other actors and behind-the-scenes footage from the set. Again, this was before the hyped animated sequences even started.

Find out what’s on tonight! Sign up for TV Guide’s daily recommendation newsletter

But those animation sequences were worth the hype. Not because they looked good, obviously. The creative team has been using the “graphic novel” descriptor, but the visual sophistication is closer to “Nintendo 64 platformer.” Though the faces looked pretty solid (within these constraints), the ears were deeply unsettling and character movement like a glitching video game cutscene. Photorealism wasn’t the point, however, nor is it particularly engaging. The worse these scenes looked — the quick moment with Merwin’s daughter most notably — the more enjoyable they were.

The shift to animation produced a few other notable flourishes. Graphic novel-style caption boxes offered some extra context to characters’ internal thoughts. The action sequences were a little longer and sprawling than they would have been in corporeal form, giving the episode a bigger finale feel. Not to go full In These Troubling Times, but it was fun to watch a show make a bold, odd choice and embrace only sort of executing it.

Hastening the season’s plotlines was equally wonky and entertaining. Last week’s episode hinted that Liz would be deeply entrenched in the middle of Red (James Spader) and Katarina’s (Laila Robins) blood feud. “The Kazanjian Brothers” demonstrated that to be true, but elected to speed up Liz choosing a side. Thanks to animation and internal monologues, the episode worked through Liz’s frustration in a far more aggressive — and frankly, satisfying — fashion.

Liz openly antagonized both Red and Katarina about their respective lying and pleaded with them to help her make the right decisions. That doesn’t happen too often on this show, where Liz and Red methodically plot against one another and maybe temporarily feud before coming back together relatively quickly. Here, though, Liz made a legitimate choice to side with her mother, even though Dom is dying as a result of Katarina’s actions and Red is experiencing grave health issues of his own. The episode ended with an anti-hero-esque monologue with Liz embracing a dark side to finally learn the truth about Red, Ilya, and her past. As a concluding image for the season — animated or not — that was very cool.

The ending of Season 7 probably would have looked a lot like this had there not been a global pandemic and subsequent suspension of production. It’s not worth theorizing how other events from this episode would play out — Katarina was going on about the Sikorsky Archives and the Townsend Directive again — or where The Blacklist goes from here, because no one has a clue about future episodes. Instead, we should celebrate this lively feat for its creativity and weirdness in a time where there’s not a lot of these kinds of responses to the pandemic.

The Blacklist will return for Season 8 in the future.