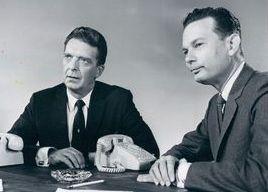 The Huntley-Brinkley Report, which made its debut in 1956, grew into one of television news’ earliest successes. Huntley anchored the show from New York, while Brinkley broadcast from Washington, D.C. Initially a 15-minute newscast, the show expanded to a half hour in 1963.

The news duo were popular with viewers and became media celebrities. Because of their on-air rapport, few realized the two men rarely interacted outside the news broadcast.

On The Huntley-Brinkley Report‘s last telecast, Brinkley told audiences that NBC gave Huntley a horse as a farewell gift. He added: “So from now on, when somebody stops me in the street and says, ‘Aren’t you Chet Huntley?’ I have an answer: It is, ‘No, ma’am, he is the one out West on a horse.'”

Following Huntley’s retirement, the newscast was renamed NBC Nightly News, and was anchored by Brinkley, John Chancellor, and Frank McGee.