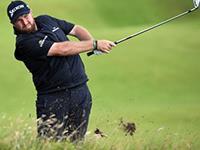 Irish player Shane Lowry has home-course advantage in this year’s British Open, as it emanates from a very tough course in Northern Ireland. And as I write this, Lowry also has the lead on the final day of play – but the conditions are treacherous, there are six holes to go, and his lead is only half that in terms of strokes. This is when deciding what to attempt, and what to avoid, can make the difference between a final-lap run and a loss of the claret jug. As I typed this, one player shanked his shot then, in frustration, broke his club over his knee.