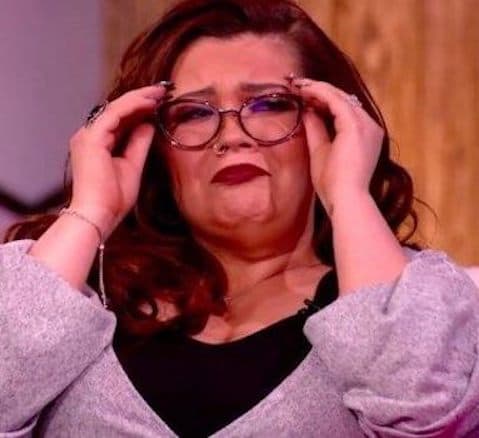 For a full decade now, the Teen Mom franchise has been the gift that keeps on giving for a whole slate of terrible moms.

What started as a series of one-off specials about teen pregnancy developed into a cash cow that’s saved people like Amber Portwood and Jenelle Evans from ever being forced to do a single day of real work.

This, despite the fact that there are entire episodes that offer little more in the way of drama than some adults arguing about a 10-year-old girl’s panic attacks.

Yes, in the real world, Amber Portwood was recently arrested for domestic violence (again!), but TV lags several months behind.

So on Teen Mom OG, the biggest problem in Amber’s life is the fact that her 10-year-old daughter is showing signs of an anxiety disorder.

Now, we don’t mean to downplay the significance of anxiety attacks or panic disorders in any way.

It’s just not the sort of issue a long-running reality show usually structures a sizable chunk of an episode around.

The fact that MTV is willing to put up with Amber’s insanity for an episode as dull as Monday night’s is a reminder that networks will do literally anything to hold on to properties that have proven consistently capable of attracting eyeballs to advertisements.

Anyway, according to Gary Shirley’s wife Kristina, Leah was sent home from school after she “started crying and saying her chest hurt.”

The usually-conscientious Gary was reluctant to label the incident a panic attack, saying, “If it gets worse, we can look for some help.”

But Amber is one of those people who thinks she’s a mental health expert simply because she’s struggled herself, so she was quick to issue a diagnose and turn her wrath toward Gary and Kristina.

“Why wasn’t I told this?” Portwood asked Kristina.

“I feel like you guys aren’t telling me anything right now. We need to figure that one out. When things like that happen, I really would love to know.”

“I’m completely crushed that Leah might be having panic attacks,” she later said in a confessional segment.

“I feel like, when something like that happens, you should just let the mom know,” she added.

“I told [Leah] next time it happens, call me. There’s things you can do to get your mind off it. She doesn’t know yet. She said it was like her eighth one.”

Amber’s punching bag boyfriend Andrew Glennon expressed shock that Gary and Kristina chose to “cut off the best coach” that Leah could have had in coping with her attacks.

We assume that’s the first time Amber has ever been called the best at anything, other than the best evidence that the reality television experiment has been a pox on society.

“There’s no cause for concern for any psychiatric help.

“I don’t want to put Leah in that category, I want Leah to be her own person and not be shadowed by something her mother has.”

Hopefully, he’ll come around on the issue and realize it’s best to err on the side of seeking treatment that may later prove unnecessary,

In a sense, we suppose it’s admirable that a major network chose to devote so much screen time to a debate over a mental disorder.

But it’s a child’s mental disorder, which makes the whole thing seem exploitative.

And Amber Portwood is involved, which makes the whole thing seem icky.