Bachelor in Paradise Premiere: Blake Hooks Up! With Two Women! 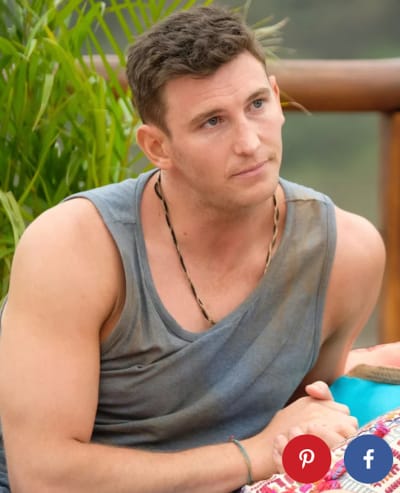 Bachelor in Paradise did not save the drama for its mama on Monday night’s Season 6 premiere.

Instead, it saved the drama almost entirely for Blake Horstmann, the runner-up on Becca Kufrin’s edition of The Bachelorette, and the two women with whom he hooked up last night.

Before we delve into that drunken chaos, a quick refresher:

While they were hoping to start something brand new and exciting in Vallarta, Nayarit, one participant said she needed to figure out the feelings she had in an existing relationship.

That would be Demi, also from Colton’s season, who revealed in a pre-beach talk with Hannah B. that she had “kind of been seeing someone.”

“Plot twist, it happens to be a woman,” Demi said on air, adding:

“It’s not something that I need to label, so I feel like I don’t have to proclaim that I am gay, I am straight, I am bisexual, I am this. I just like who I like. It doesn’t matter who or what you are, it’s the person.”

Demi added that this woman was “amazing,” but that she is not in an exclusive relationship.

So bring on the hook-ups, people! Men and women!

Once she hit that warm and inviting sand, Demi found a connection with 32-year-old Derek — and they ended up kissing in the hot tub, which we’re pretty sure it mandated in the show’s by-laws.

“I’m ready to find someone that’s ready to have a relationship, and I’m having fun exploring,” she explained in an on-camera interview.

“I’ve had some fun with Derek tonight. He’s a sweet, sweet man and I feel good whenever I’m around him. Derek is a good kisser and I love it.

“I do think that Derek’s sexy. I’m having a lot of fun but I’m definitely trying to take it one day at a time right now.”

As for Blake? He was trying to take it one woman at a time…

… and not always succeeding.

“Blake and I talked for a few months and it was really great, but he played me and that sucked,” Caelynn, 23, told host Chris Harrison of her ex, adding:

“It wasn’t fun. I really did struggle and he hurt me. So if he is here, I just want to clear it up and I’m hopeful that Blake will man up.”

Horstmann immediately ran away once he saw Caelynn descend the stairs.

“Blake sucks,” she continued, as many of the other female contestant expressed interest in going on a date with the handsome 30-year-old.

“All of the girls are saying what a great guy he is, and I’m sitting there like, you guys don’t even know who this guy is. We were seeing each other, I was pretty sure it was exclusive.

As they went off for their evening together, Caelynn opened up to bartender and former Bachelorette contestant Wells.

“I thought he was a great guy and then we really had something,” she told Wells of Blake.

“We talked about skipping Paradise and coming out with us, and then he ghosted me. Just like fully stopped communication and now I’m here. F-cking first date. And then we saw each other at a music festival.

“He ended up sweet-talking me and we spent the night together. And we wake up and I’m in his bed and he’s DMing Hannah G. I’m still in his bed, he’s talking about how hot Tayshia is.

“I was like, ‘Are you kidding me?’ Like no dude, that’s not okay. And then he was like, ‘I just want to let you know I hooked up with Kristina [Schulman, from Nick Viall’s season of The Bachelor] the night before.’”

She went on to say that Blake told her the two of them had to keep their old romance a secret in Mexico.

Wells encouraged Caelynn to spread the truth about Blake, so precisely that and let Onyeka from Colton’s season be the first to know about her bad experience with Paradise‘s most in-demand hottie.

“We were like FaceTiming three times a day, texting every day,” Caelynn told Onyeka, explaining:

“I really liked him. Like I was like, I actually see something with this guy. And everyone last night is like, he’s the king of Paradise. Everyone wants to date him. I was like, guys, he’s so good at twisting things. Very smooth…

Kristina then arrived… with a date card of her own.

And she asked out Blake!

“Me and Kristina were hanging out maybe like six or seven months ago,” Blake told the other men.

“It started as a friendship and then it moved into something more. But whether it was the timing or whatnot, but we decided to stay friends and we have been. We’ve still like honestly, we talk.

“We’re still there for each other for certain things. Honestly, we’ve been very open with each other. It ended very mutually.”

Kristina didn’t see it the same way, however.

“I know what happened with him and Caelynn. I honestly thought he would have a little more respect for me, so knowing that he spent the night with her kinda hurt my feelings,” she said.

“That’s a slap in the face to me, and I will not let myself be f–ked over again. So today, I’m going to make Blake my bitch.”

Cue an evil laugh… and the conclusion of the episode… and the start of yet another season of this franchise where the ladies are here to hold men accountable for bad behavior.

We hope that’s the case, at least.