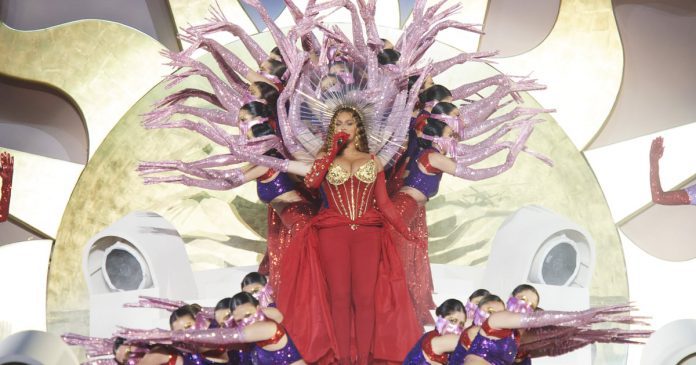 Queen Bey is officially back!

After four long years, Beyoncé made a triumphant return to the stage on Saturday, Jan. 21 for the grand reveal of Dubai’s newest hotel, Atlantis The Royal, where POPSUGAR was on hand. “Welcome, everybody. I feel so honored to be here,” she told the crowd.

The 41-year-old superstar transformed the resort into her very own concert venue, kicking off her performance with a soulful rendition of Etta James’s “At Last” before diving into a medley of her greatest hits, including “XO,” “Halo,” “Beautiful Liar,” “Crazy in Love,” “Naughty Girl,” and “Drunk in Love.”

The star-studded invite-only event brought out a slew of celebrities, from Winston Duke to Nia Long and sisters Chlöe and Halle Bailey. Beyoncé also informed the audience that her husband, JAY-Z, was in attendance, along with her mom, Tina Lawson, dad Mathew Knowles, and her three “beautiful children” who were there to “see their mom perform.” In fact, one of the best moments of the night was when Beyoncé’s 11-year-old daughter, Blue Ivy Carter, joined her for their “Brown Skin Girl” collaboration, which earned Carter her first Grammy back in 2021. “Give it up for my baby,” Beyoncé announced to the audience as Carter dazzled on stage in a sparkly red sequin ensemble.

Surprisingly enough, Beyoncé did not perform any of the songs from her “Renaissance” album during the hour-long show — perhaps she’s saving those for her upcoming tour. Instead, she opted for a more acoustic, slowed-down set, featuring songs like “Flaws and All,” “Ave Maria,” “Freedom,” “Be Alive,” and “Bigger” from “The Lion King: The Gift.” She also brought out the all-women Firdaus Orchestra and Lebanese dance group The Mayyas in between her three outfit changes, which consisted of a yellow feathery gown, a red and gold jumpsuit, and a hot pink minidress.

For the grand finale, Beyoncé walked through the center of the hotel’s Skyblaze fountain, where she was literally lifted up into the air and an epic fireworks show ensued. Beyoncé’s last major live show was at the Global Citizen Festival in December 2018. She also delivered a pre-taped performance of “Be Alive” at the 2022 Oscars.

However, it might not be long before Beyoncé graces the stage again. According to Variety, the 28-time Grammy winner is reportedly in talks with Grammy Awards producers about a possible onstage appearance at this year’s ceremony on Feb. 5. Beyoncé — who is already the most nominated woman in Grammys history — scored nine nods for her “Renaissance” album when the 2023 Grammy nominations were released on Nov. 15, bringing her total nomination count to a whopping total of 88. She’s also currently tied for most all time with JAY-Z.

Ahead, see more photos from Beyoncé’s spectacular performance at Dubai’s Atlantis The Royal, which officially opens on Feb. 10.

Who Is Jonathan Groff Dating?

Who Has Tom Brady Dated?