Concert Review: Billie Eilish Is a Bad-Ass Kid and Wisened Chanteuse, Too, in L.A. Kickoff 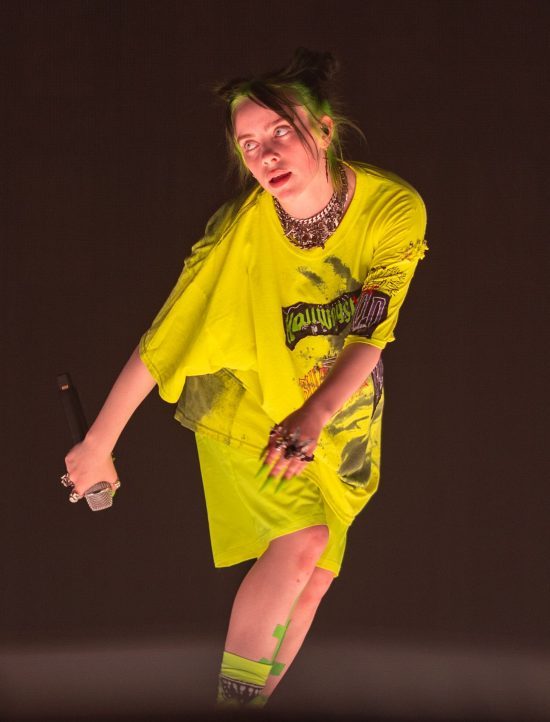 Billie Eilish is probably going to break Taylor Swift’s record for being the youngest person to win an album of the year Grammy — if there’s any justice, and if there isn’t any reverse ageism striking fear into Recording Academy members’ hearts about the repercussions of letting someone who’ll be 18 by then win for an album she released at 17 and recorded at 16. Maybe, if you’re disinclined toward such early rewards, you imagine that Eilish is somehow a product of the studio, or of the guiding effects of older brother Finneas O’Connell, who co-writes and produces the material. These are the stories we tell ourselves when we lay awake wondering why we haven’t accomplished anything as magical or wonderful as “When We All Fall Asleep, Where Do We Go?” at 25 or 45 or (if we’re both lucky and unlucky) 90.

But tours are telling, and it’s something again to see preternaturalism made flesh. On the opening evening of a three-night stand in L.A. June 9 — at the first of two long-booked gigs at the Shrine Expo Hall. to be followed by an add-on date at the Greek, all immediate sellouts — she enjoyed critical support from her sibling co-auteur, with O’Connell tripling on bass, guitar and synths. (A drummer rounded out the triangular lineup on the sparest, shiniest tilted stage you’ve ever seen, after the audience was treated to hilarious amounts of Windex spit-polish applied by roadies between acts.) But it was Eilish being a boss… except for the moments between songs when she spoke and the acolyte showed through. In song, at least, her vocal inflections and physical mannerisms seemed honed and matured from years playing these same rooms. So you had to laugh when she expressed awe at playing the Expo Hall — a room that, to be honest, has probably not impressed that many of the people who’ve headlined there — because it was where she saw her first very first concert, a whole four years ago. There’s still plenty of that brat in her, as she literally kicked her green sneaker heels up against her green cargo shorts — even as there were also moments when she let her green pigtails down and you might have imagined her glammed up, in more neutral colors. on a Shrine red carpet a few decades from now. Right now, anyway, she’s at a pretty great nexus: a snot-nose old soul.

“This shit is crazy, bro!” she said, using the B-word literally. “Me and him literally came here when I was 13, and I had never gone to a concert before, and we went to see the Neighbourhood here, actually. We were standing right there,” she said, pointing to a spot near the merch booth. “And I was tiny as hell, so he had his arms over me like this, blocking anyone from like a foot away from me.” With Finneas holding an acoustic guitar beside her and occasionally leaning his head on her shoulder, she was about to sing one of the recent album’s loveliest ballads, the baldly titled “I Love You. “We wrote it just like this on my bed at 2 in the morning, so we wanted to perform it for you guys the exact way we wrote it.”

Eilish was, in fact, delivering this monologue from atop a blanket and sheets, since the tour’s sole prop is a hydraulically substantial bed, lowered from the rafters for a few special occasions over the course of the set’s 70 minutes. She does mean to get you into it, and not in a sexual way —teen lust is kind of a recessive trait in her material so far, so there’ll be no gyrating —  but via the alternately terrifying and comforting connotations that bedtime can bring, especially, but hardly exclusively, to a child. There’s a fine line between teen angst and night terrors in some of her music. She’s big on bad dreams, which you already know if you’ve seen more than one or two of her music videos, and the big screens behind the trio on stage invoked a lot of that imagery, from spooky, white-eyed cartoon silhouettes in forests to an all-consuming shark. But the bed wasn’t just the site of some freak-out choreography from a 10-member dance troupe, but, as that bedside talk with her brother would indicate, a sweetness and coziness that just about negated the image she built up with all those creepy videos and photos where she showed off her resting-badass face.

In moments, Eilish’s music had an exhilarating EDM-rock quality; “Copycat” and “You Should See Me in a Crown” would almost beg for metal covers if her versions weren’t close enough. The only thing keeping a lot of the songs from being actual rock ‘n’ roll, really, is O’Connell favoring thick bass lines over a guitar he employs to much rarer effect. But the set gradually crept toward more conventional moments — and gorgeous ones, when it came to the piano-driven suicide lament “Listen Before I Go” or some bona fide romantic R&B in the form of “Bitches Broken Hearts” and the purely lovelorn “Ocean Eyes” (these last two leftovers from an earlier EP where Eilish was still forming her identity). The penultimate number, and the most beautiful in her repertoire, “When the Party’s Over,” was delivered from a stool with all the care and inflection of someone who’d spent a lot more decades ghosting parties and relationships. In these and other ballads, you hear a jazz singer waiting to be born from the punk kid. But thankfully, the punk kid is still with us, and it was her rounding out the show, using that bed as a bounding board for “Bury a Friend,” one of the most fun songs ever written about the terrors of real-life sleep paralysis.

The crowd chanted along as she closed out the show with the questioning final line that forms the album title. It was a fitting sendoff to a sweet dream where even old coots can consider the idea that gifted post-millennials might yet save pop as we know it.