Hannah Brown Has a Message For Jed Wyatt’s Ex-Girlfriend: We’re Better Than This Clown! 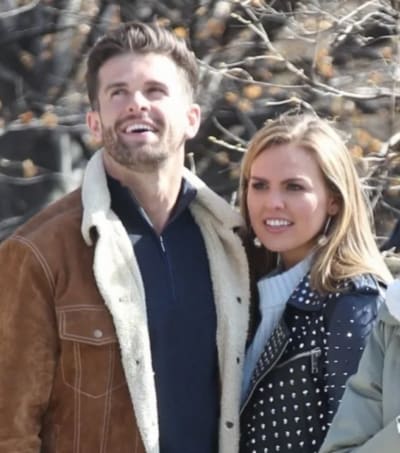 Even if you didn’t watch Hannah Brown’s Bachelorette season finale, there’s still a good chance that you heard about all the insanity that unfolded.

If you didn’t, here’s a very brief rundown of what happened:

In short, Jed Wyatt proposed to Hannah Brown, she accepted, and then all hell broke loose.

Hannah broke up with her new fiance after learning that Wyatt had a girlfriend waiting at home while he was filming.

So Brown figured it all out before she made the colossal mistake of marrying Wyatt and she even got some semblance of a happy ending when her runner-up, Tyler Cameron, agreed to go on a date with her.

But what about the woman Jed was cheating on?

After all, Haley Stevens came forward to expose Wyatt at great personal risk.

If Jed had been a better liar, it’s possible that no one would have believed her, and she might have become a national laughingstock.

Instead, she saved Hannah from making a life-changing mistake.

Now, Brown has a message for Stevens that’s likely to be music to the ears of irate Bachelorette fans:

I’m better than d-bag Jed, and so are you!

As for what her own future holds, Hannah described it in the endearingly roundabout fashion she’s become known for:

“I do feel like this was in my plan, and even though I sometimes don’t understand why I had to go through some of the pain that I’ve been through the past few months,” she tells People.

“I learned a lot, and had to really look at some of my patterns right with my own eyes and make the decision that would be really hard for anybody to end what you thought was going to be forever, but I learned so much about who I am and what I define as love, and love myself and know my worth,” Hannah continues.

“it was really, I think, a huge moment for me to be able to step away from that relationship, and know my strength from that, so I think it was all supposed to be in this way.”

As for whether or not she would ever try being Bachelorette again (given that her season was kind of a dud), Hannah says she’s done seeking love on camera — for the time being.

“That is a little soon for me to even think about,” she tells People.

“I want to be a normal—as normal as I can actually be—person and just really continue to process the crazy ride that I was just on, but I will always be thankful for having this opportunity and will love my Bachelor family. But as far as that, I can’t really think about that just yet.”

If anyone’s entitled to another go-round, it’s Hannah.

We just hope she’ll adjust her douche detector and get a little bit better at weeding out the Jeds and the Luke P’s first.