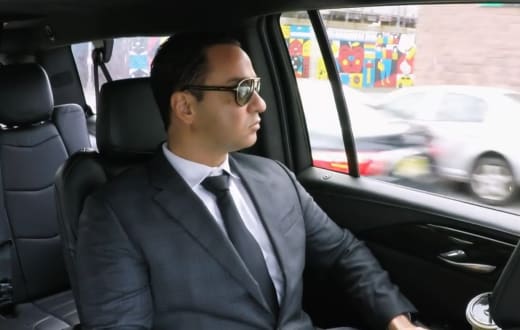 They say if you want to make God laugh, announce your plans.

We don’t want to get too deep into a discussion about fate and theology in an article about the season premiere of Jersey Shore: Family Vacation, but it’s hard not to contemplate the apparent randomness of chance when considering the strange case of Mike “The Situation” Sorrentino.

At the time that last night’s two-part premiere was filmed, however, the reformed party monster was a free man in more ways than one:

The episodes found him simultaneously planning a wedding and bracing himself for sentencing.

And believe it or not, the premiere’s most emotional scenes might not have had anything to do with Mike!

Fortunately, our favorite guidos handled all that heaviness with their usual good humor and immaculately coiffed hair.

Yes, much of the runtime was dedicated to The Situation’s situation, with Mike making compromises as a result of his limited travel schedule and booking a venue in Jersey rather than Italy.

Lauren was unimpressed by Sorrentino’s “Tuscany by the turnpike” remark, but c’mon — how could Mike not get married in Jersey, on a Jerzday?

Sitch wasn’t the only one with jokes, of course, as Pauly D remarked that what his castmate really needs now is a judge who’s “DTF: down to forgive.”

The guys discussed Mike’s case at a barber shop — of course — and pettiness reigned, as Mike fixated on the fact that Ronnie failed to buy a gift for his wedding shower.

“This guy’s facing court, and his biggest issue right now is Ronnie didn’t send him a gift,” Vinny remarked.

Prior to sentencing, Mike remarked that he was “ready for anything, from probation to maybe even a year in jail.”

His new Zen-like demeanor came in handy, as the judge threw the book at him, while most of the Shore family awaited the outcome at a bar near the courthouse.

(It was decided that only Vinny and Jenni would accompany Mike inside, so as to avoid a scene.)

“Wait, they sentenced him to 24 months?!” an astonished Ronnie shouted after learning the news. “Are you f–king kidding me?!”

Despite all of that, the night’s most painfully tear-jerking scenes may have belonged to Jenni Farley, who opened up about her troubled home life with admirable candor.

These days, Jenni is getting divorced from Roger Mathews, but during filming, her abusive marriage was in the process of crumbling.

Making matters even more difficult was the fact that Jenni was dealing with the dissolution of her relationship while simultaneously seeking out the best treatment plan for her son Greyson, who suffers from autism and OCD.

“Roger believed that Greyson was just a slow learner and he was gonna learn on his own, and that caused a lot of tension in our household because you have one parent that’s like, ‘I need to get ahead of this,’ which is me, ‘and fix it,’ and you have another parent that’s like, ‘What are you doing? It’s not a big deal. There’s nothing wrong with Greyson,'” a tearful Farley recalled.

“So it is such a shitty situation to be in. It’s really hard to explain it to people that don’t have kids, the level of sacrifice we make for them,” she added.

Yes, the very hardest realities of adulthood have come to profoundly affect the lives of the formerly-hard-partying Shore family, and as Jenni laments, their money can only do so much to insulate them.

The show might still be subtitled Family Vacation, but there wasn’t much to fist pump about on this week’s Jersey Shore.