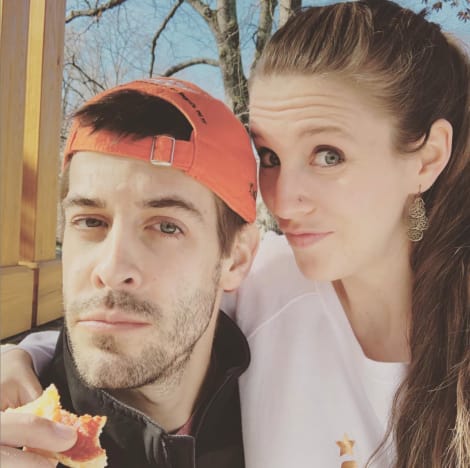 For the most part, Jill and Derick have done exactly what’s expected of them.

They started cranking out kids almost immediately and boasted of their religious devotion at every opportunity – which are pretty much the two most important things any Duggar couple can do.

But in many ways, Jill and Derick have defied tradition and blazed their own trail.

For example, remember when Derick was fired from Counting On for hurling bigoted, transphobic statements on social media?

Appalling stuff – but for many of the family’s evangelical fans, it pales in comparison to the revelation that Jill and Derick enjoy sex.

Yes, the Dillards celebrated their fifth anniversary last week, and the way they chose to celebrate this raised more than a few eyebrows.

They marked the occasion by combining Duggar-like wholesomeness with the kind of sexual deviancy one might expect from those sinful Kardashians.

Jill and Derick went to a theme park and caught Toy Story 4 in theaters – but they also posted a photo that showed a copy of the Kama Sutra and a sex game for couples.

Seriously. That was a thing that happened.

And as OK! magazine points out, many of Jill’s followers were not happy about that unsolicited glimpse into her sex life.

“No offense to y’all but I don’t want to know what goes on in between the sheets! Please keep it PG remember you were raised a Christian,” one person wrote.

“Bible open in the background, Kama Sutra and massage oil in the foreground … just weird,” commented another “fan.”

“Why oh why do you feel the need to post this? You wear modest clothing to keep your body covered, yet you share intimate details about your sex life with the world?”

Some fans took issue not with the sexual nature of the post, but with the fact that Jill and Derick are endorsing a book that’s not Jesus-approved.

“Am surprised you would read the Kama Sutra, it is Hindu,” one follower commented. “You are inviting Satan into your marriage.”

Amazingly, Jill took the time to dignify this idiocy by responding to it.

Even more amazing is the fact that she didn’t simply tell these people to take inspiration from some of the more ambitious diagrams in the Kama Sutra and go eff themselves:

“We are not recommending the Kama Sutra,” Jill wrote in an edited caption for the post.

“We believe marriage is ordained by God and husbands and wives should filter everything they read and hear together through the lense of the Bible and not practice anything unbiblical.”

“The little book pictured is a modern, smaller, cleaner, edited version that doesn’t focus on spiritual aspects, homosexual, or other extramarital relationships, and again, we don’t take everything in there either as the truth.

“It is always good to be aware and careful of what we allow into our minds, hearts and marriages.”

“We’ve not read the actual Kama Sutra and only promote biblical marriage (i.e. between a man and woman who are married).”

“We just wanted to clarify since there has been a lot of discussion after this post,” she added.

That’s a whole lot of words to justify having a little sexy-time fun with your husband.

Can someone who knows the Bible better than we do dig up some quote about the importance of minding one’s own business?

If it’s not in there, just make something up.

Most of these judgemental asshats have never actually read the thing anyway.