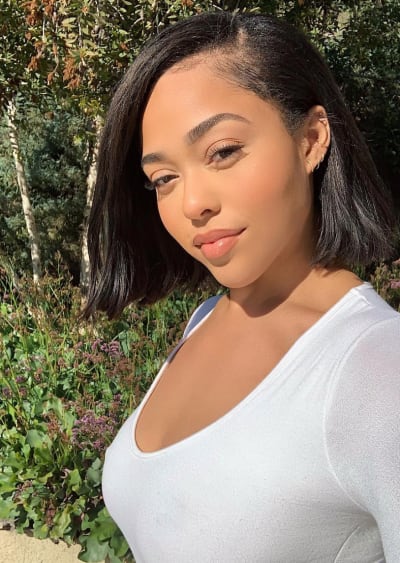 Jordyn Woods is hopng that a fresh look leads to a fresh start.

The heretofore little known model/reality star/business woman had taken several days off Instagram after she admitted to kissing Tristan Thompson while he was still dating Khloe Kardashian.

This was especially egregious because Woods has been close to Khloe and her family for many years.

After laying low for awhile after this scandal went viral (and after Khloe finally dumped her terrible boyfriend), Woods spoke to Jada Pinkett Smith on the actress’s Facebook Watch talk show.

And now she’s sort of made her first public comment since becoming Enemy Number-One of so many people on social media.

“If you’re reading this.. it means God has given you another day to wake up and be grateful & better than you were yesterday,” wrote Woods as a caption to the photos down below and up above.

As you can see, they feature Jordyn wearing a tight shirt and also showing off her new haircut.

Perhaps this is what Woods is now thinking.

As noted previously, Jordyn’s return to Instagram comes after she appeared on Jada Pinkett Smith‘s Red Table Tal, to share her side of the cheating scandal.

Sitting at a table across from her pal and mentor, Woods claimed that Thompson was the one who initiated a smooch between himself and Woods.

She asid he kissed her while she was on her way out of an afterparty at the NBA star’s house a few Sundays ago.

“On the way out, he did kiss me,” Jordyn told Pinkett Smith, who asked if it was a peck or something more romantic.

She added: “No passion, no nothing, on the way out. He just kissed me. Like a kiss on the lips, no tongue kiss, no making out, nothing.”

This may have been the case, it’s true.

The thing is… why not reveal what happened to Khloe if it was merely a quick kiss on the lips?

Why not alert her friend that her baby daddy was once again being disloyal?

This is the question our staff recently debated upon discussing whether or not Khloe should forgive Jordyn.

While Woods has admitted she made a mistake, she also denied being the reason why Thompson and Kardashiana are no longer together.

“I would never try to hurt someone’s home, especially someone that I love. And someone that I’ve seen — has a beautiful daughter. I never was trying to steal someone’s man.”

Upon first seeing Jordyn’s interview, Khloe lashed out and said it was, indeed, Jordyn’s fault that her family fell apart.

But Khloe has since changed her tone and laid this blame at Tristsan’s feet. Where it deserves to be.

“This has been an awful week & I know everyone is sick of hearing about it all (as am I). I’m a rollercoaster of emotions & have said things I shouldn’t have,” she Tweeted a week ago, concluding at the time:

“Honestly, Tristan cheating on me & humiliating me, wasn’t such a shock as the first time.

What’s been harder & more painful is being hurt by someone so close to me. Someone whom I love & treat like a little sister. But Jordyn is not to be blamed for the breakup of my family.

This was Tristan’s fault.