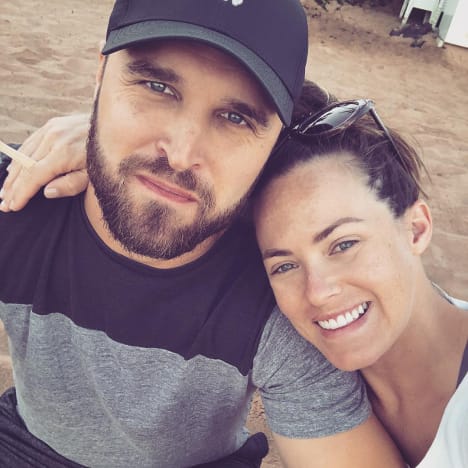 From tragedy to triumph.

Kara Keough Bosworth and her husband, Kyle Bosworth, announced the arrival of a son named Vaughn Mack Bosworth on Saturday, just under a week after breaking the news that they were expecting.

And just about a year after losing a baby during childbirth.

“The day McCoy was born, I started writing a story,” she explained, wrote alongside a slideshow of photos of her newborn, including a snapshot of him spending time with five-year old sister Decker Kate.

“Our story. I don’t typically like to spoil the ending, but in this case the ending is a new beginning.”

With that said, Kara wrote:

“Measuring at 20.5 inches and weighing 7 pounds 6 ounces of heaven-sent sweetness.”

Keough Bosworth went on to share that Vaughn was born on March 31, only “6 days before what should have been his big brother’s 1st birthday.”

The 32-year old went on to provide some background on their newborn’s name… while simultaneously tribute to their late son.

“His name means ‘small/little’ and ‘hope,'” she wrote.

“It’s not lost on us that if we hadn’t lost Mack, we’d never know Vaughn.

“And yet, here he is, an unexpected serendipity. A little hope.”

For the past several months, Kara has shared tributes to McCoy, who passed away days after he was born full-term due to complications endured during his birth.

On Tuesday, April 6, she honored him on what would have been his first birthday.

“A year ago today, I screamed you into this world,” she wrote in an Instagram post, alongside a photo of then then-newborn swaddled in a bassinet.

“I begged God to let me hear you scream back.

“Instead, there was silence from you before the ‘Come on, McCoy’ chants started, shattering my heart and completely deflating the euphoria that comes after birth.”

“I’ll love you for all the days of my life, and loving you the way that I do makes me feel like I know God.

“So I guess it’s true what they say, that grief is next to holiness. Thank you for teaching me how to love unconditionally. And that grief and love can sit beautifully right beside each other.

“And finally, thank you for showing me that even though losing you feels dark – it’s also true that with depth comes darkness, like the ocean.

“And just like the depths of the ocean, my love for you – the love of a parent for their child – it just keeps going. So yeah, it may be a little dark down here…. but it’s deep, too.”

Kara also said she held a birthday party for McCoy, during which family members surprised her by telling them that in honor of his first birthday, a donation would be made in his honor to help fund a family suite in the NICU at Wolfson Children’s Hospital.

“Realizing my son has done more good in his short life than most people will with way more time is perhaps one of the most healing feelings,” Kara wrote.

“I don’t know much, but I know I want to be like McCoy when I grow up.

“To all who made this possible, thank you.”