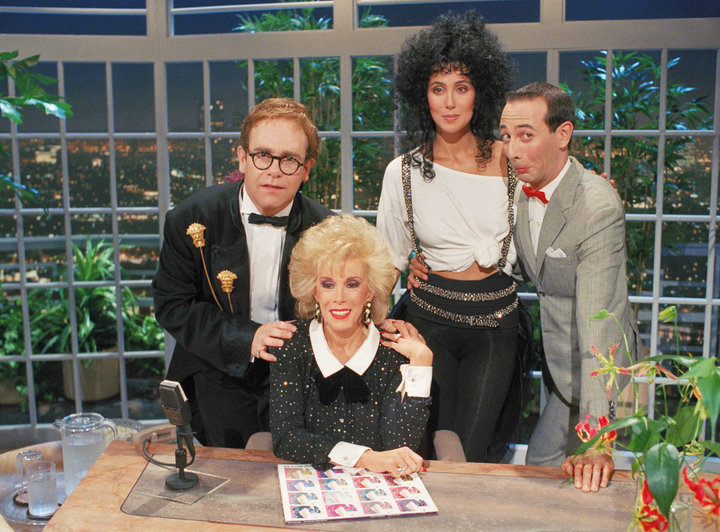 The crowd-pleasing comedy “Late Night” has so far proved to be this year’s Sundance smash, selling to Amazon for a mammoth $ 13 million and forecasting a large footprint for Emma Thompson’s Miranda Priestly-esque talk show veteran.

But I cannot absolve “Late Night” of one egregious sin: actively omitting Joan Rivers from the titular television genre’s history.

Thompson plays the fictional Katherine Newbury, who is said to be the first woman to host a late-night show. Katherine’s program debuted in 1991, meaning she has been on the air for an impressive 28 years ― enough time to observe a sea change in the industry, now valuing viral-video stunts over thoughtful interviews. But “The Late Show Starring Joan Rivers,” which launched on the heels of its namesake’s celebrated stint as Johnny Carson’s go-to guest host, premiered in 1986; Rivers is, famously, the first woman to host a late-night series.

Normally I wouldn’t care about factual integrity in a fiction film, but “Late Night” very much positions itself in the real world. It’s a backstage peek at Hollywood gender politics and the economic constraints of flailing television ratings, with Mindy Kaling, who scripted the movie, playing a proverbial diversity hire in Katherine’s all-male writers’ room. Jimmy Fallon and Seth Meyers ― the latter of whom cameos ― are name-checked as Katherine’s younger, trendier competition. Her preferred guests include the likes of Doris Kearns Goodwin and Dianne Feinstein. Mary Tyler Moore and Gilda Radner are her inspirations. Her potential replacement, if ratings don’t improve, is a fratty male comic she delightfully labels a “wanker” (Ike Barinholtz).

So yes, “Late Night” is steeped in recent history, and Joan Rivers is omitted from that history. I’ll admit my bias: I am a Rivers diehard who combusts when the world dismisses her contributions to popular culture. Even if I weren’t, “Late Night” didn’t need to cherry-pick its way through the entertainment landscape to make a point. Calling Katherine the longest-lasting woman in late night, or the most revered, would be just as powerful. But Rivers, who satirized gender hypocrisies long before doing so was in vogue, opened a door that shamefully closed with her show’s cancellation. To ignore that is to create a wish fulfillment wherein a woman had a much easier time gaining a foothold than she.

Does this alone ruin the movie? Nah. But it further distances “Late Night” from the realities of network television. Until an executive (Amy Ryan) threatens her job, Katherine never contributes to the series’ writing, nor does she know any of her staff members’ names, despite being a control freak. For an image-concerned celebrity whose stature hangs in the balance, she seems conspicuously divorced from everything going on around her. Katherine’s disdain for social media and Fallon-type artificiality places her among the old guard, meaning she would have come up in the comedy scene alongside Rivers. Despite Thompson’s spicy performance, Kaling’s penchant for zippy dialogue distracts from what could have been a trenchant take on today’s evolving talk show culture. Instead, the movie settles for being occasionally funny and flaccidly observed.

The Rivers omission is a little rude, if I can be so petty. Kaling, after all, is no stranger to firsts: She was the first female writer on “The Office” and the first Indian-American to create and star in her own show. Similarly, “Late Night,” directed by sitcom veteran Nisha Ganatra, represents a record-breaking Sundance deal for a female-driven film. Surely someone as brazen and pioneering as Katherine Newbury ― or Mindy Kaling ― would recognize Rivers’ impact. (In fact, we know Kaling did; she once called the late Rivers “completely fearless.”)

Joan, wherever you may be, I see you.