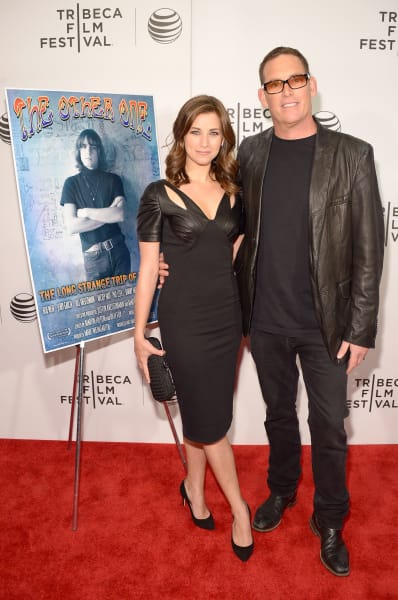 Over the past few weeks, the eyes of Bachelor Nation have been fixated on Luke Parker’s sexist remarks and Hannah Brown’s reluctance to cut this suitor loose.

Until this past Monday night, that is.

But now the focus must shift for a moment to something far more disturbing and scandalous, as the man responsible for this franchise has been accused of assault…

… against his pregnant wife.

In legal documents filed on Tuesday, Laura Fleiss asked for (and was eventually granted) a domestic violence restraining order against Mike Fleiss, the reality TV producer who created both The Bachelor and The Bachelorette.

According to this filing, Laura alleges that Mike learned this month that his wife was pregnant — and he reacted in angry and then violent fashion.

“While we were at our house in Kauai, Mike demanded that I get an abortion,” Laura says, describing events that she says took place on July 4.

“Our son Ben was in the house, seated in another room nearby. Mike told me, ‘If you have an abortion, then we can just go back to the way we were.'”

Laura said she was 10 weeks pregnant at the time, and that Mike had previously made it clear he did NOT want her to have another child.

“Prior to July 4th, Mike threatened me that if I did not have an abortion, he would end the marriage,” she claims in these, continuing as follows:

“This was not the first time he had threatened a divorce during our marriage, but now, he was using this threat as leverage to force me to have an abortion.

“In addition, on July 4th, Mike made the following statements to me:

‘I am cutting you off financially Monday morning’; ‘You are paying for everything with your money’; ‘Next time I see you, I don’t want to see your stomach’; and ‘You have a choice, you can choose. Have an abortion or go back to Wisconsin, but you are not taking Ben.’

“He continued to threaten me, demanding to see bank statements showing I paid for an abortion and the flight information to and from Oahu for the medical procedure.”

Laura is a former Miss Wisconsin. She was actually crowned Miss America in 2012.

She alleges that Mike had been “enraged” ever since learning that his wife was expecting again. She says he made it clear from the day they wed that he would concede to one kid… but did not want any more.

On July 5, Laura claims that “Mike was even more angry than he was on July 4th.”

She goes on to describe that day and how she asked a friend to come and stay with her and Ben at the home because Mike was staying at another one of their houses in Hawaii.

The next day, on July 6, Laura says Mike returned and “angrily entered Ben’s bedroom looking for my cellphone.”

She asserts that Mike “forcibly grabbed my phone out of my hands” and then “exited the bedroom, and rushed to the top of the stairs.”

Laura details how she followed Mike an attempt to get her cell phone back and “he yelled that he was going to ‘shove me down the stairs.’”

Just before the couple made its way outside?

“He grabbed my body, forcibly pinned me up against the wall and held me there. After I broke free, he continued to use his arms and hands to aggressively push me away from him as he walked outside the door, still not returning my phone.

“Then he walked towards his pick-up truck parked outside in our driveway, shouting ‘I’m going to punch your face in.'”

Laura says the confrontation continued after Mike got into his car, put it in reverse, nearly ran her over and then “forcefully shoved me off of the running board, closed the car door and drove away with my cellphone in his possession.”

“I was extremely traumatized from the incident and started crying hysterically,” she claims in the documents, adding:

“Our unborn child and I could have been severely injured if I had fallen off the truck’s running board or run over the wheels of the truck.”

At a hearing, Laura’s attorneys presented photos allegedly showing the attack and Laura’s injuries, per The Blast.

A judge granted Laura’s restraining order against Mike and another hearing is set for August 6.

“We are aware of these serious allegations, and are looking into them,” a spokesperson for The Bachelor producer Warner Bros. said in a statement to Deadline.

Concludes Laura in her filing:

“I am afraid of Mike. I am afraid he will continue to act erratically towards me, verbally and physically, and in the presence of Ben.

“I have been hiding in a hotel for the past several days with Ben, and want to be able to return home without fear for myself, my son and my unborn child.”

Following his estranged’s filing for this restraining order, Mike filed his own declaration… in which he denied Laura’s claims and requested primary custody of Ben.

“I have not hurt, attacked, or attempted to physically harm Laura or our child, Benjamin Fleiss ‘Ben,’ in any way,” Mike says in his response, according to court documents obtained by The Blast.

Fleiss recently made headlines after getting into a Twitted feud with Grey’s Anatomy actress Ellen Pompeo and Kelly Ripa over comments the latter made on her talk show about The Bachelor, saying that it “disgusts” her.

Fleiss — who goes by the the Twitter name @fleissmeister because he’s just that cool — shot back:

Pompeo then returned fire with THIS EPIC RESPONSE.