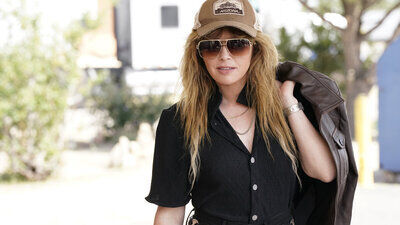 Just as important as finding the lead in a show like “Poker Face” is to find guest stars able to stand toe-to-toe with the protagonist. Whether that’s in the case of a would-be victim, the falsely accused, or the murderer, half the fun of this series is discovering who’s involved with each episode. Johnson and Lyonne are working with a great list of stars including Ron Perlman, Stephanie Hsu, Clea DuVall, Lil Rel Howery, Joseph Gordon-Levitt, and many others. Each episode, out of the six screened for review, had at least one standout performance—”The Night Shift,” for instance, has an appearance by actress Hong Chau, and she makes an outstanding impression in her limited screentime as a trucker framed for the murder of a local. In another episode, “Time of the Monkey,” Judith Light and S. Epatha Merkerson are elderly hippies with strong convictions. Just watching how they play off one another and interact with Charlie is a treat.

Perhaps not a big surprise to audiences familiar with Johnson’s “Knives Out” movies, “Poker Face” has plenty of hilarious moments. Lyonne is a talented comedian and the guest stars are just as prepared. In “The Stall,” a BBQ Pit Master suddenly decides to go vegan because he’s a murderer of animals and needs a career change. What ultimately led to that career change is easily one of the show’s funniest gags. Plenty of other great moments peppered throughout the series are strong, and while the shows like “Columbo” had their laughs, “Poker Face” has a strong comedy focus that works without feeling like it’s forced.

“Poker Face” is derived from a winning formula, but a few hiccups come with the mystery-of-the-week format. As each episode contains new characters and stories, certain episodes will inevitably work better than others. One of the weaker episodes, “Rest in Metal,” focuses on a has-been band and their desperate need for a new hit single. While not every crime on the show needs to be elaborately conceived, this one is too simple and doesn’t work either. In this era of streaming television, “Poker Face” is almost an anti-binge show; it’s better as a mystery to watch once a week rather than all the episodes at once. That might make returning to the adventures of Charlie Cale less enticing than other programs.

“Poker Face” was brought to life by nostalgia for a certain kind of crime drama, and Johnson and Lyonne have a lot of passion for the material. Homages to genre classics can be seen throughout the show’s format, even in the title treatment. And Natasha Lyonne is the perfect actor to follow week in and week out as Charlie finds herself in the thick of countless murders. I’m already looking forward to what predicaments she’ll get into next.

Six episodes were screened for review.

Knock at the Cabin