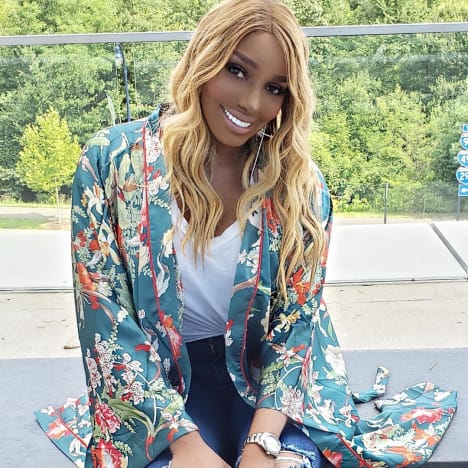 The Real Housewive of Atlanta fans will recall that season 11 did not exactly end peacefully.

There’s been a schism between the girls ever since the Bye Wig party erupted into a huge fight.

And after a tense reunion on Wednesday, drama addicts can rejoice in the knowledge that the bad blood will carry over to season 12 as well.

The occasion was housewife Marlo Hampton’s “I am Her” hair event.

As is often the case on the Housewives shows, one of the girls holds a promotional event of some kind, and the other cast members show up to give their support.

Or at least that’s how it looks on paper.

Usually, the event only exists in service of the drama — an upscale backdrop for the girls to trash talk each other while wearing cocktail dresses.

That certainly seems to be the case here, as star NeNe Leakes finally reunited with on-screen nemeses Kenya Moore and Porsha Williams.

NeNe has been avoiding some of her castmates ever since her epic freakout at the Bye Wig party.

As fans will remember, that altercation became fightentingly heated and culminated with NeNe attacking a camera man, who lost part of a tooth.

NeNe still has a grudge against Porsha, who instigated that whole fracas by trying to sneak into NeNe’s very off-limits walk-in closet with Kandi Burruss.

Nene was also reportedly enraged to learn that Kenya was brought back for another season, after producers fired her for keeping her marriage a secret.

Ironically, Kenya might have been kept off the show if NeNe didn’t hate her so much.

Apparently, the beef the two women was too much for Bravo to pass up.

Since rejoining the group, Kenya has been going out of her way to find a story line for herself.

To that end, she made sure to stir up some trouble at the “I am Her” event on Wednesday too.

An inside source tells RadarOnline that Kenya attempted to crash the party, bringing her own rival line of hair care products.

“Kenya was trying to wage a war with Marlo to cause drama,” the source claims.

A tacky move to be sure, but it’s sure to make great TV if the cameras were rolling for this event, and we expect that they were.

But despite this perfect receipe for another NeNe vs everyone blowout, sources say NeNe was on her best behavior.

“There were no confrontations,” the source told Radar. “And [NeNe] even said hello to Kenya.”

That’s some true progress for NeNe, who recently refused to be filmed in any scenes featuring Kenya or Porsha.

With that said, it’s best to keep in mind that we all say hello to people we dislike on a regular basis.

Sometimes you have to play nice or not play at all.

At some point NeNe will have to swallow her pride and interract with her enemies, or she’ll miss out on a ton of screen time.

But sources say she’s not quite there yet with Porsha.

“Porsha is the only RHOA who said she is not interested in rekindling a friendship with NeNe at all,” the insider claims.

This was plainly evident at the “I am Her” event, where NeNe froze Porsha out and the two girls didn’t acknowledge each other at all.

So at the end of the night, an olive branch was offered, but plenty of bad blood lives on.

We can’t wait to see how it all goes down on the next season of Real Housewives of Atlanta.